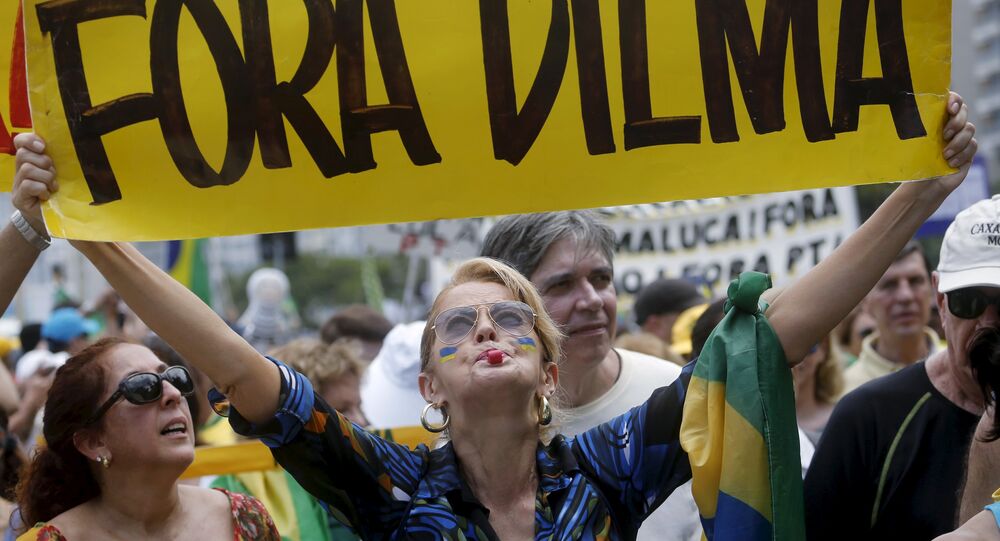 Rousseff’s Impeachment Could Lead to New Elections in Brazil

“This process has been going since her reelection in 2014. Her impeachment has polarized society and representatives of the country’s lower middle class are ready to take to the streets to protest in favor of [President Rousseff] and against her impeachment,” Dr. Dos Santos said.

© REUTERS / Ueslei Marcelino
Brazil’s Interim President Calls for Unity After Rousseff’s Suspension
When asked if Brazil was really tearing itself apart or whether this impeachment process was just a clash between corrupt clans, Dr. Dos Santos said that corruption is problematic and a big part of the problem right now.

Many senators and lower house representatives have been accused of corruption and are being investigated, especially over the Petrobras scandal. But focusing on corruption in seeking an impeachment is not enough.

“Political parties and factions are using the impeachment process as an excuse to put the Workers’ Party and its policy on trial. To take away the Workers’ Party from the government and to redirect the country in whatever direction the PMDB (the Brazilian Democratic Movement Party) sees fit,” he noted.

“Dilma Rousseff has not been implicated in any major scandals at this point, including the Petrobras corruption scandal.”

Dr. Dos Santos also said that Rousseff’s impeachment was still “a way to address some of those problems and could lead to something better in the future.”

When asked if interim President Michel Temer could also be suspended from office as his party is involved in a corruption scandal with the state company Petrobras, Dr. Dos Santos said that in theory the PMBD has the clout and members both in the House and Senate to slow down any attempts to impeach Temer.

“The volatile political environment and public pressure may actually sway even party members or even other parties to push for Temer’s impeachment and new elections” he said.

Eight percent of Brazilians consider Dilma’s impeachment and replacement as the best way to deal with the crisis and 62 percent believe that new elections would be the best way out of the crisis.

“Well, new elections are difficult because you have to have a constitutional amendment to call new elections outside the once-in-every-four-years system. And there is a possibility that as a result of new elections [ex-President Luiz Inácio Lula da Silva]will be elected  and that’s an outcome the opposition is not going to risk. Lula’s popularity is still very high. So a new election is difficult, but is possible. I don’t think it would be a solution to the problem. In any case we would see a very nasty campaign from both sides,” Dr. Dos Santos said in conclusion.

More than half of senators who voted for Dilma Rousseff’s impeachment have pending legal cases against them.

“60% of the legislators accusing her of corruption and judging her, in fact, have procedures running against them for corruption,” Doctor Kai Michael Kenkel, Professor at the Institute of International Relations at University in Rio de Janeiro, told Sputnik.

Oops! '60% of Rousseff’s Accusers Are in Corruption-Related Proceedings'