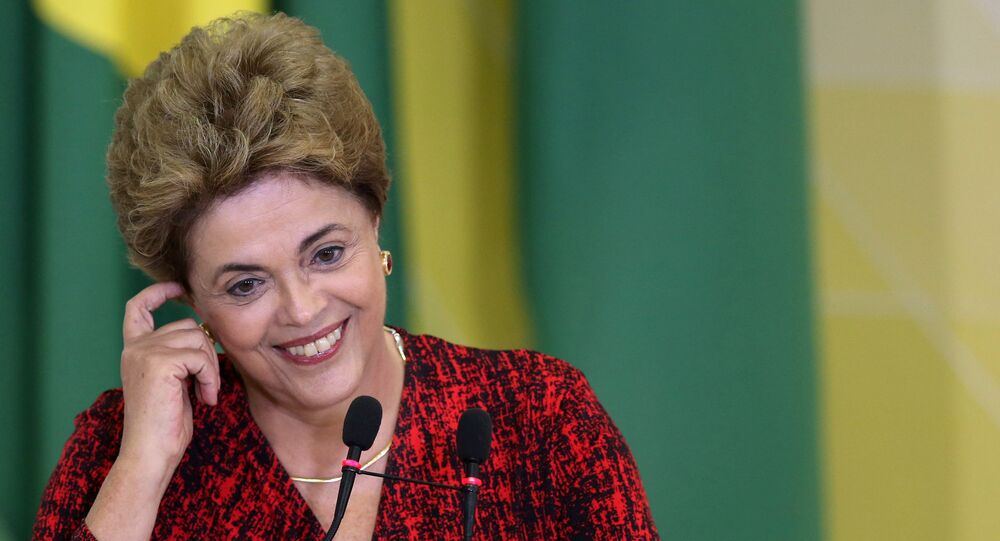 Oops! '60% of Rousseff’s Accusers Are in Corruption-Related Proceedings'

The Brazilian president has been temporarily suspended from office and is due to face an impeachment trial after the majority of senators voted against her. Doctor Kai Michael Kenkel told Radio Sputnik that more than half of senators who voted for Dilma Rousseff’s impeachment have pending legal cases against them.

“60% of the legislators accusing her of corruption and judging her, in fact, have procedures running against them for corruption,” Doctor Kai Michael Kenkel, Professor in the Institute of International Relations at University in Rio de Janeiro, told Sputnik.

© AP Photo / Ueslei Marcelino
'I Never Received Bribes': Brazil's Rousseff Dismisses Impeachment Vote as 'Coup'
Kenkel further said that there is a huge deal of corruption and a huge accountability gap with the legislature at the federal level and other levels in Brazil at the moment. “It does seem that entrenched interests are being represented by certain lobbies.”

Talking about Rousseff and what she will be doing while on suspension, the analyst said, “She has been given these six months to devote herself entirely to her defence against these charges. The assumption is that she will be rallying the troops internationally and domestically to her cause and drawing up a way to not be indefinitely impeached by November.”

However, Rousseff denied any wrongdoing and said that the current impeachment effort amounts to a coup d’état. The trial will last up to 180 days.

© REUTERS / Ueslei Marcelino/File
Tit for Tat? Brazilian President Rousseff Dismisses Cabinet After Impeachment
During the trial, the country will be run by Vice President Michel Temer. Talking about Temer and accusations of corruption against him the analyst said, “It is hard to say what the outcome of the first process would be. It is true that if he was found to be guilty of corruption he would be ineligible for the presidency at this point. So we have a situation where Rousseff may be out and it is possible that Temer would be out.”

The analyst added that as one goes down the chain, 8 out of 10 politicians are accused of corruption charges. In the case of Rousseff if the yes vote receives a two-thirds majority, she will be permanently suspended from the office — if the opposite happens she will be reinstated.

“One of the most striking things about this crisis is that at the moment the extent to which it has polarized society and has pulled people to extreme positions. Now there is a large chuck of the population in favor of impeachment, there is a larger chunk of people against Rousseff and there is also a huge number of people supporting the government and Rousseff.”

He further said that in his opinion it is a situation where the government wasn’t particularly popular and wasn’t exceptionally good and is now being removed from office through a mechanism that is being misused. It is going to end up weakening institutions and that is the real tragedy of this crisis.

Talking about how the next few weeks will develop for Brazil, Kenkel said, “We will see Temer starting to set up his cabinet. We will start to see where the political deals were, we will see a political shift and shift in social policy. We will see whether it gets better from here, although I am skeptical.”