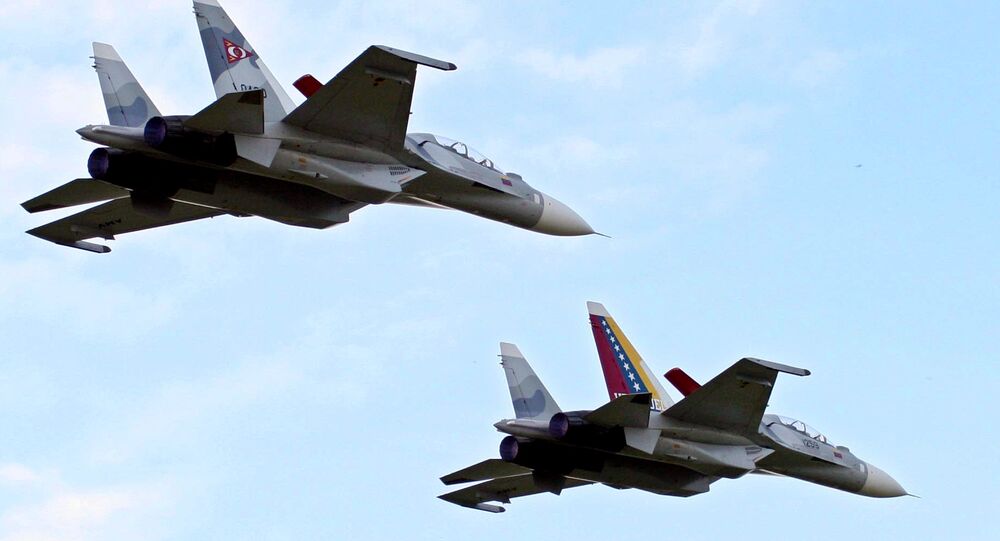 War of the Words: Colombia And Venezuela Quarrel Over Military Flyover

The Colombian defense ministry said it will lodge a complaint that military jets from Venezuela entered Colombian airspace; its neighbor denies the claim.

© REUTERS / Miraflores Palace/Handout via Reuters
Venezuela Ready to Take in 20,000 Syrian Refugees - President
The Colombian government has announced it is lodging an official complaint that aircraft from Venezuela violated its airspace on Saturday; the Venezuelan government responded by saying that Colombia made up the allegation.

"I have instructed the Defense Ministry and the Foreign Ministry to file a formal protest with Venezuela tomorrow, for violating our airspace," Colombian Prime Minister Juan Manuel Santos wrote on his Twitter account on Sunday.

On Monday, the Colombian Foreign Ministry published a statement on its Twitter page, informing of its plans to deliver a protest note regarding the flight of two Venezuelan aircraft over the Colombian part of the Guarija Peninsula, the northernmost part of South America.

The Foreign Ministry said it would request an explanation from the Venezuelan government for the violation, which was reported by the Colombian Air Force at Riohacha, capital of the La Guajira department, after a review of air defense radar data.

However, the claim was rebutted by Venezuela's government; Foreign Minister Delcy Rodriguez likewise took to Twitter, to respond that "there is no evidence of an alleged airspace violation of a neighboring country, beyond a fabrication [used] in order to frustrate a presidential meeting."

"We view with concern the systematic trend of the Colombian government to invent incidents that do not exist in order to affect relations," continued Rodriguez.

It is hoped that the presidential meeting referred to by Rodriguez will defuse a recent row between the two nations regarding a crackdown by the Venezuelan government on smuggling and crime at their shared border.

The crackdown has resulted in the deportation of more than 1,000 Colombians from Venezuela, and the closure of several border crossings.

At the weekend, Foreign Minister Rodriguez and her Colombian counterpart Maria Angela Holguin held talks in Ecuador in the presence of the Ecuadorean and Uruguayan Foreign Ministers, in an attempt to find a resolution to the dispute, and organize a meeting between the heads of state.