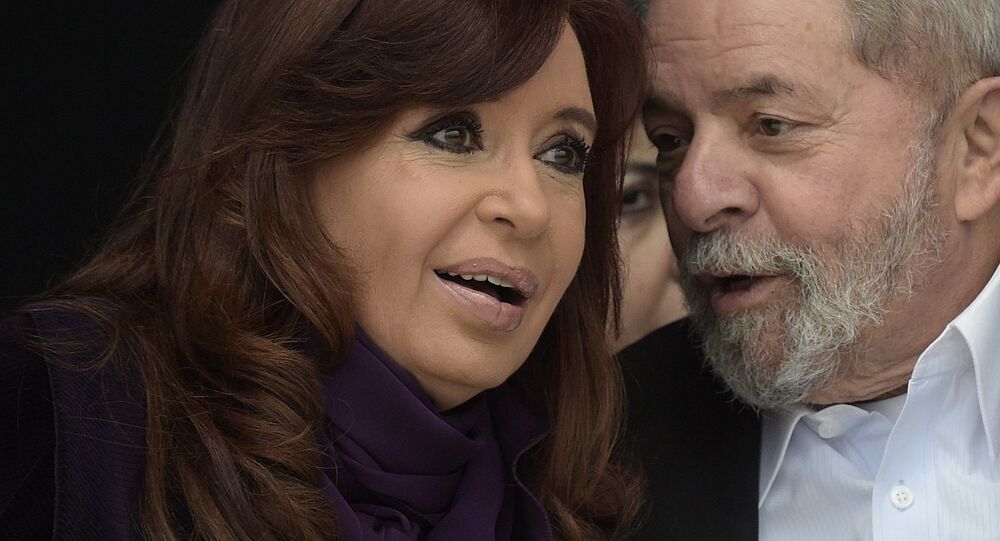 According to the agency Prensa Latina, Kirchner's statement, which was made earlier this week, came amid the ongoing election campaign of Daniel Scioli, Argentina's presidential candidate from the ruling Frente para la Victoria (Front for Victory) party.

Lula da Silva backs Scioli, who is expected to become Kirchner's successor given that Argentine law prevents her from running for a third term.

© AP Photo / Ivan Sekretarev
Zero Sum Game: West Wants to Pull Foundations From BRICS
Notably, the issue of Argentina's possible entry in BRICS was on the agenda of last year's BRICS summit in the Brazilian city of Fortaleza, where Kirchner met with Russian President Vladimir Putin and his Chinese counterpart Xi Jinping.

At the time, experts argued that it was too early to speak of Argentina entering BRICS because the country was in a state of technical default due to the refusal by a number of hedge funds to accept the restructuring of Buenos Aires's public debt.

© Flickr / 401K 2012
Argentina Refuses to Negotiate US Hedge Fund Debt, Complains of Attacks
According to Argentina's media, the decision indicates the United Nations' intent to help protect Argentina and other countries from so-called "vulture funds".

Whereas the four original BRICS nations are ranked by the United Nations and IMF as being among the world's ten largest economies in terms of nominal GDP, South Africa ranks 33rd, far below Argentina. However, South Africa controls key mineral resources.

Meanwhile, Sudan has signaled its readiness to act as an observer state within BRICS, which has significantly increased its international clout in the past couple of years.