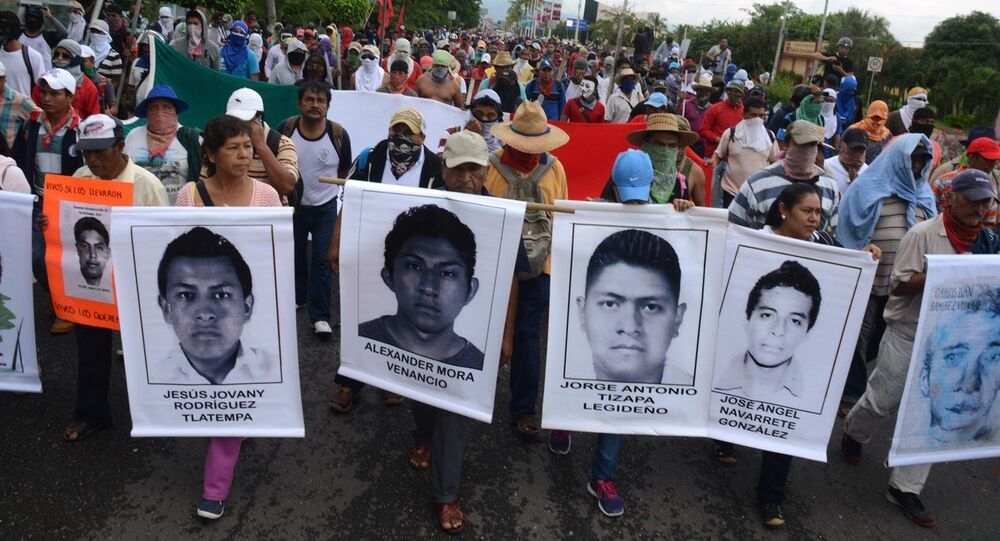 Thousands of people took to the streets of the Mexican Pacific resort town of Acapulco and besieged the international airports in yet another wave of protests over the alleged massacre of students in Iguala, with the parents of the missing students leading the rally.

MOSCOW, November 11 (RIA Novosti) – Another wave of protests over an apparent killing of students in Iguala shook the Mexican town of Acapulco on the Pacific Coast, as thousands of people marched through the town towards the international airport.

The angry demonstrators, led by the parents of the missing students, clashed with police and besieged the airport for hours.

The protesters, some of whom were masked and armed with sticks, blocked the airport's entrance for more than three hours, although several tourists managed to sneak in via a private terminal, AFT reported on Tuesday.

© East News / AP
A masked student holds a stick during a protest against the disappearance, and probable murder, of 43 students in the state of Guerrero, at the Acapulco airport in Mexico, Monday, Nov. 10, 2014

At least 20 police officers have been injured by the demonstrators, who threw stones and a firebomb at riot police who tried to block their way to the airport.

"Every Mexican is in this struggle," AFP quotes Beatriz Barros, a Mexican traveler, as saying. "I don't care if I arrive home later because what they [the protesters] are doing is fair."

Three flights were canceled because of the violence.

The rally followed violent protests which erupted in the country over the weekend, where the government was accused of involvement in the killing of students in Iguala in the Mexican state of Guerrero in the country’s southwest.

On September 26, a group of policemen, accompanied by unidentified armed men, cracked down on students in Iguala who were protesting educational reforms. Six people were killed and 17 were injured as a result of the violence. Fifty-seven students went missing, of whom 14 returned home later.

On Friday, Mexican Attorney General Jesus Murillo Karam reported that the detained suspects had confessed to the killing of over 40 young men, whose bodies they allegedly then burned before tossing into a river.

Karam warned that it would be difficult to identify the charred remains and that the authorities will continue to consider the students missing until DNA tests confirm their identities.

However, Murillo Karam agreed to meet the parents of the missing students on Tuesday, AFP quotes Epifanio Alvarez, father of one of them, as saying.

"We want to tell him we want officials from the United States to come to beef up the search," said Alvarez.

Government Building in Mexico Attacked in Protests Over Students’ Murder