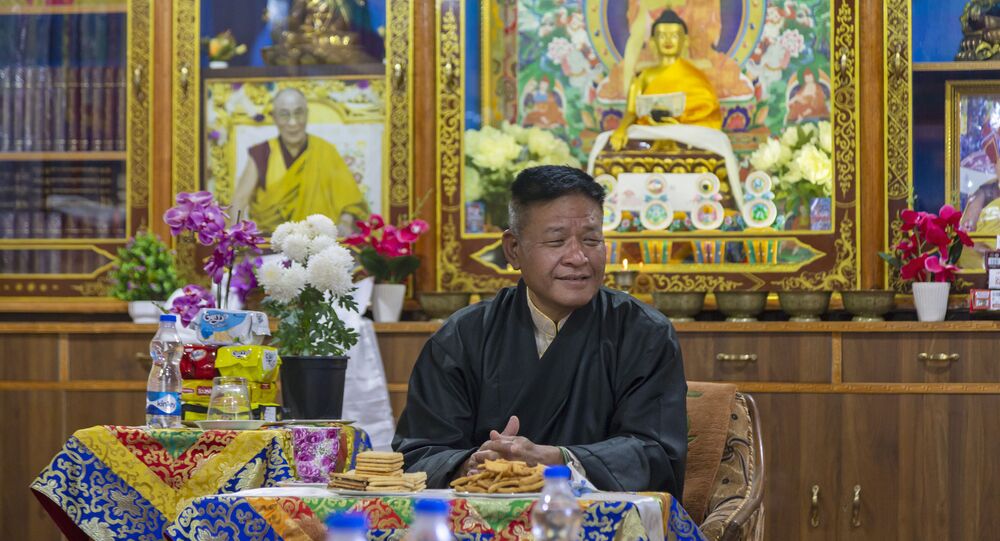 Penpa Tsering, the new president of the India-based Central Tibetan Administration (CTA), last week took charge as the 17th leader of the parliament-in-exile. Tibetans dispersed across 25 countries voted to elect Tsering as their next leader in what was only the second democratic election for the global Tibetan community.

"Tibet Since 1951: Liberation, Development and Prosperity", a white paper released by China last month, has made claims about the rapid development and religious freedom accorded to inhabitants of the Tibet Autonomous Region (TAR) since 1951, when the Communist Party took control of the province.

Among other things, China reiterated that the successor to the current, 14th Dalai Lama, must be approved by the political leadership in Beijing.

In his inaugural address last week, the new president of the Tibetan government-in-exile, Penpa Tsering, offered to send his delegates to Beijing to verify the claims made in the Chinese document.

Speaking to Sputnik, Penpa Tsering has offered his views on the possible prospects of Tibet, relations with Beijing, and the future Dalai Lama.

The usage of Tibet in the interview refers to China's Tibet Autonomous Region. India, like most countries, recognises TAR as part of China and complies with the One China Policy.

Sputnik: Do you recognise Tibet as part of China? For you, what's the future of Tibet?

Penpa Tsering: Are Manchus Chinese? Are Uyghurs Chinese? Han are the only Chinese. The Chinese government has its own version of history, which they use as a political tool against those opposing Beijing's influence. Tibetans have never considered themselves as part of China. Rather than seeing themselves as Chinese, Tibetans have viewed their traditions and culture as an extension of ancient Indian culture.

As far as the future of Tibet is concerned, we want to coexist peacefully as neighbours and live in harmony. We look forward to resolving the historical differences with Beijing.

Sticking to past differences will not help us to resolve our problems. We want our differences with Beijing to be solved in a mutually beneficial and non-violent manner that could serve as a model for the rest of the world.

Right now, the situation in Tibet is very concerning. As part of Beijing's demographic aggression, the majority community in China is overwhelming the ethnic minorities in the region through settlements. Then, there are environmental concerns related to massive infrastructure activity being carried out in Tibet by China. The environmental degradation taking place not only affects Tibet, but neighbouring countries such as India too.

Sputnik: China claims Tibet has performed well on development parameters since 1951, life expectancy is over 71 years, and there are more than 1,700 sites for Tibetan Buddhist activities with 46,000 monks and nuns. It also says there is more political representation for ethnic Tibetans in elected bodies.

China also accuses supporters of the current Dalai Lama as inciting a wave of self-immolations among Tibetans. What do you think of such claims?

Journalists should corroborate the development indices mentioned by Beijing in the document by demanding free access to Tibet.

In my inaugural address, I called for unhindered access for our delegates to Tibet. Right now, there are many impediments for those wanting to travel to the region. Even foreign diplomats posted in Beijing are not allowed to visit there. Why does one need a special permit from Beijing to visit Tibet? What we need is third party verification of these claims.

And if Beijing claims that the Tibetan region has developed under Beijing's rule since 1951, I would like to ask how much the rest of China has progressed since 1951. What were the crucial developmental parameters back then as compared to what they are today?

I am sure if Tibet had been independent, the ethnic population would have been much happier than it is now.

Sputnik: Beijing also says the Dalai Lama has always been appointed by Beijing, dating back to the 11th century.

Penpa Tsering: Well, the Manchu influence only arrived in Tibet in 1720. That was when the seventh Dalai Lama was in power. So, I could say that there was no Chinese involvement in selecting the Dalai Lama until then.

It was only from the ninth Dalai Lama onwards that the Chinese (rulers) started to get involved in the selection process. So, the 10th, 11th, and the 12th Dalai Lama were chosen through the "Golden Urn" (a method introduced by the Qing Dynasty in the 18th century for the appointment of lamas and other religious leaders).

Penpa Tsering: The exodus of Tibetan refugees from China largely stopped after 2008, which is due to the stricter monitoring and security measures in place in the region. Security has been particularly heightened at the Nepal border. Nepal and India are the only overland routes for Tibetans to escape from there.

However, that doesn't mean the situation within Tibet has improved. There is no mental freedom. Freedom of speech is restricted. There is no freedom of movement for Tibetans, as well as for those wanting to travel to Tibet.

Sputnik: A Tibetan-origin soldier serving in the Indian Army was reportedly killed in a mine blast at one of the disputed Ladakh border sites last year. How have Tibetans in India helped New Delhi over the years?

Penpa Tsering: This was a very recent event. But let me tell you that Tibetans have been serving in the Indian Army since the 1960s, after the formation of the Special Frontier Force Unit within the army after the India-China border war of 1962. Tibetan soldiers served in the Bangladesh War of Liberation in 1971 as well as the India-Pakistan Kargil conflict in 1999.

We are proud to have served India and are grateful to the country for all the support it has given us over the years.

Sputnik: Lastly, the US under ex-President Donald Trump passed the Tibetan Policy and Support Act, one of the boldest moves by Washington in backing Tibet. Do you expect the Biden administration to follow up with more such measures? How crucial is support from the international community for you?

Penpa Tsering: The support for the Tibetan cause in US politics since 1987 has been bipartisan and bicameral. There isn't much fluctuation in the support in the White House either, irrespective of the fact whether a Republican or a Democrat is in power.

For the last few years, we have been seeing a much more proactive US policy in support of Tibet. While ex-President Trump passed the TPSA 2020, the momentum seems to have been sustained. The public message by Secretary of State Antony Blinken on the occasion of Tibetan New Year was a first for our ties. Similarly, the success of the Tibetan presidential elections was felicitated by State Department spokesperson Ned Price.