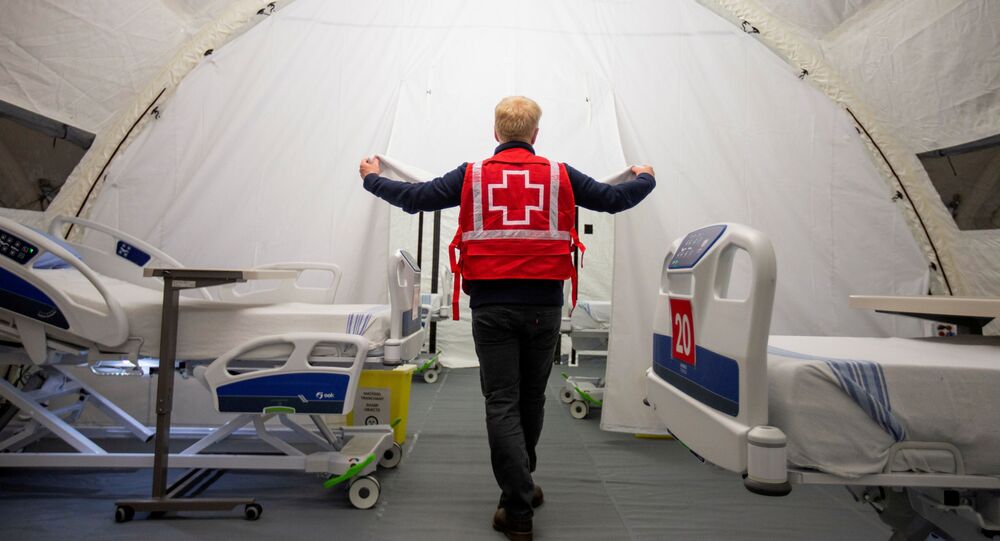 Recent coronavirus testing at Ontario’s Willowdale Welcome Centre has revealed dozens of COVID-19 cases among its residents, many of whom are homeless asylum seekers, as well as among its staff.

While the initial number of those infected by 15 April was 11 residents and 12 staff members, within five days it was reported to have jumped up to 74 and had risen further to 88 cases by 25 April. According to Rebel News journalist David Menzies, who has covered the outbreak, the number of those infected has been growing rapidly, and the incident points at several pressing immigration-related problems on the municipal and federal levels.

Sputnik: In your news report from the Willowdale Welcome Centre you mentioned that despite the spread of the coronavirus, there were people both inside and outside the facility who didn’t have proper personal protective equipment. And yet, while you were filming these violations, the shelter’s management called the police to escort you off the property. Was the absence of masks and gloves the only problem that you noticed there?

David Menzies: We got to go back to look at the building itself, which was never designed to be a hostel or a hotel – it was a former office building for North York hydro.

And this is exactly the kind of building that the infectious diseases experts have warned us against putting people in overnight. Yet, the city is doing this.

If you or I would buy that property and make it a bed-and-breakfast for tourists – there is no way we would get a business permit to run it that way in the condition it’s in. Secondly, we know this is a hot spot.

Two weeks ago, the number of refugees that had the Wuhan virus was 11, and then, within days, it went to 74, and now it is at least 149. This is in less than a two-week period. So, it is spreading like wildfire.

Sputnik: You came back to the shelter a couple of days ago to work on an update. Has anything changed there since your first visit?

David Menzies: We’re being told that there are proper safety measures being put in, such as plexiglass partitions, such as personal protective equipment.

But as of this Tuesday, when I visited the centre again, I witnessed a food delivery taking place where, with the exception of one person in the car, nobody was wearing a mask, and even the staff member who received the food had zero protective equipment on.

I guess that the crux of the matter – what makes us interested in that facility is that our mayor – Mayor of Toronto John Tory – he is taking to Twitter to brag about many law-abiding taxpaying citizens, i.e. the people who are funding this shelter, are getting fined $880 for doing things like walking in the park, where there is no danger happening.

And meanwhile here is something that the City of Toronto is responsible for. It is completely hypocritical and their response is not to address it by having a lockdown of the facility, which I think is needed, but rather shut down the narrative by calling the police on journalists. I think it’s quite shameful.

Besides Willowdale Welcome Center, which has a capacity of 235 beds, its umbrella organization manages other facilities for the homeless in Toronto. The organization is currently asking on its website for donations in personal protection items, saying that the need is urgent. pic.twitter.com/yM0loIwy5w

Sputnik: Homes First – the organisation which manages the facility – has not replied to our request regarding the outbreak. They wouldn’t tell us where their residents are coming from, how many people have checked in and out of the facility in recent weeks, or how the management is planning to curb the further spread of the disease. Why is there such a lack of transparency when it comes to the process of asylum seekers’ accommodation?

David Menzies: I can only imagine that this is the government – the local municipal government in this case, embarrassed by what’s happening there. It really puts them in a situation when you have ordinary law-abiding citizens getting an $880 ticket for walking through a park, and meanwhile you’ve got this behaviour happening at a shelter – at a shelter that we know as one of the hottest spots for this virus in Toronto. That’s my only theory: they don’t want this to be seen.

Before 21 March, when Canada closed the border because of COVID-19 there were dozens of people crossing into the country daily from the US through the so-called “irregular” checkpoints, such as Roxham Road. In 2019, 16,503 “irregular crossers”were registered by RCMP. pic.twitter.com/UOtPOve26E

​Sputnik: Canada was allowing “irregular border” crossers to enter the country and file asylum claims up until the end of March. Some of them could have ended up staying at the Willowdale Welcome Centre while their asylum claims are being processed, but it’s hard to confirm since that information is not being disclosed by the authorities. In your opinion, what was the government’s reason for allowing these thousands of illegal migrants into the country?

David Menzies: When Justin Trudeau, I believe in 2017, put out that infamous tweet – “#WelcomeToCanada”, which was really a “take that, Donald Trump”-moment for Justin Trudeau, so while there was talk about the wall going up in the United States to protect its borders and sovereignty from illegal migrants, Justin Trudeau took the complete opposite act and said: “come on in”.

It’s not as if I don’t have a heart – if you’re someone fleeing persecution, if you fear violence or even death – we have to look at those cases, but the evidence shows that many of these people that are coming are economic migrants.

You can see footage from Roxham Road – these are people wearing designer clothing, and you have to wonder – is this somebody that really needs a safe harbour, especially if they are coming from the United States of America, or is it somebody taking advantage of a programme for refugees.

© CC BY 3.0 / Stamen Design
New Website Monitors the Policing of the COVID-19 Pandemic in Canada
I think the unspoken strategy of the Trudeau Liberal government is that this is all about really changing the demographics of Canada.

So, basically, you allow people from wherever they are coming into Canada and the “quid-pro-quo” is “just remember, every four years, when you’re going to that little ballot box, you vote Liberal, because we’re the guys that got you in here”. And I think that’s what it’s all about. They are building a bigger and bigger base of people who will habitually vote Liberal, and therefore keep Liberals in power.