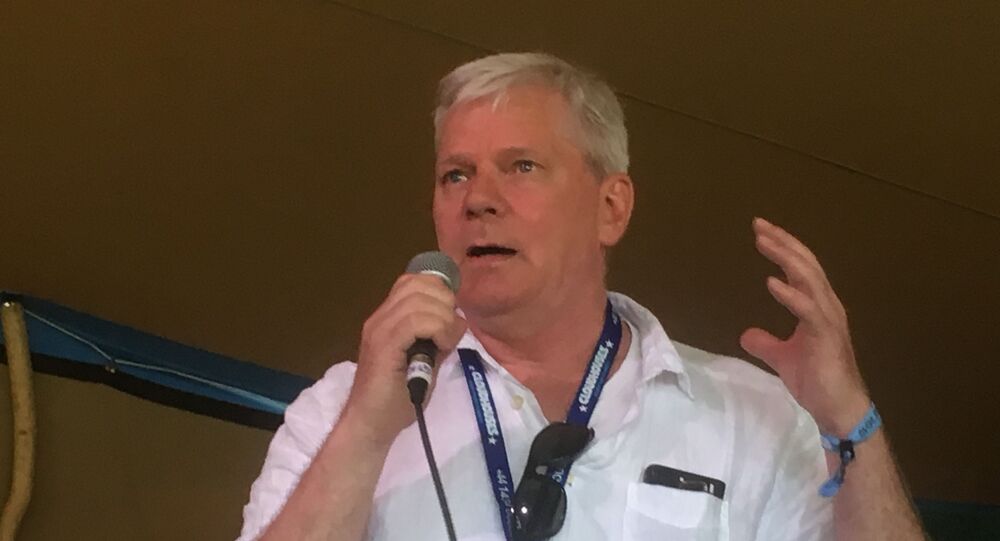 At a festival in the heart of the Scottish countryside, whistle-blower’s and activists are given centre stage amongst the drums and the dancing. With a fair bit of festival mud, it’s not quite the environment you might expect to find Julian Assange’s successor, editor-in-chief of Wikileaks, Kristinn Hraffson.

Sputnik caught up with him, for a word on WikiLeaks and his role in the organisation.

Sputnik: The heavy-handed approach that is being taken against Julian Assange is often labelled as an attempt to dissuade future whistleblowing. What can be done to ensure that potential future whistle-blowers are protected?

Kristinn Hraffson: To protect whistle-blowers, we need to create a genuine law. The whistle-blowing laws that have been passed in many countries usually have the opposite effect. It’s not protecting the whistle-blower, they are outlining that you should go to certain platforms before you actually go to the media. You should talk to your boss, and then, you know, go up the steps. However, if you don't stick completely to the process, then you're open game. They will go after you. But in saying that, there is an understanding, and there's an appreciation. People do appreciate what Edward Snowden did, apart from the American authorities of course. I mean, it was extremely important information that he brought us. We got involved in WikiLeaks with Edward Snowden because the media betrayed him. The Guardian journalist and the other American journalist working on the base of his material just left him in Hong Kong after they were, had been fed with the information. So he was just sitting there, a sitting duck waiting to be arrested or extradited. So we stepped in, and we're actually helping him get into Latin America. His passport was revoked, and he was stranded in Moscow. And now, of course, being a condemned for seeking asylum in Russia, when actually the State Department in the US was responsible for him ending up there. So, to answer the question concisely, supporting of whistle-blowers in general, and at the same time, laws can be changed, and awareness of the importance of whistle-blowers can be raised on all platforms to ensure that this important work is carried out.

Sputnik: Do you see any danger at all in encouraging whistle-blowing, and freedom of the press, for purposes of national security? These rules and laws are put in there for good reasons presumably?

Kristinn Hraffson: Well, of course, there's a limit, there's a line you don't cross. I've always said that if somebody leaks to WikiLeaks and I see the launch codes of missiles from the submarines you're hosting here or whatever, then, of course, it wouldn't be published. There is a limit there. But the concept of ‘threat to national security’- this term is just so overly broadly used that it has lost any meaning.

Sputnik: Do you have an example of this?

Kristinn Hraffson: The publication from 2010, (related to the war in Afghanistan), which is the basis of the indictment now against WikiLeaks, against Julian Assange. For 10 years the US government have been maintaining that this publication had terrible consequences. I had the head Chief of Staff on TV in front of me, claiming that WikiLeaks might already have blood on their hands. He was in tears- which was a bit ironic, given the fact that he basically been swimming in the blood of the slaughters of Iraq and Afghanistan. But in 2013, the Pentagon had to admit in the Chelsea Manning trial, that no one had been harmed as a result of the 2010 publication. They are still clinging onto the hopes they'll find somebody, somewhere, that might have been harmed. I know actually, that a major news organisation was working on a story that they might actually have found one. But, it gives you an indication of actually how overblown this reaction is that this notion of national security- it hasn't anything to do with the National Security. It has to do with the secrecy of the military organisation that politicians don't want you to know. It's as simple as that. They want you ignorant. They want to keep their secrets for themselves. This has been changing very fast. I mean, their comments are becoming more and more secretive. And it has happened slowly, without us actually recognising it, because it's incremental. So, yes, in the end, I am not too worried, I don't see that anything that WikiLeaks does is in reality affecting national security.

Sputnik: Clearly WikiLeaks is a massively powerful tool for that reason. Is there any worry that there are not enough people paying attention to the info that is being published?

Kristinn Hraffson: It depends on the material. I mean the most important material that was posted were the war crimes that did get attention and will get attention still. Even the mainstream media is very eager to work with WikiLeaks when there is something on offer because they like big headlines as well. But it's not reflecting in the way they actually write about WikiLeaks or Julian Assange in between. If it is newsworthy material, it will get attention.

Sputnik: About Julian Assange, ought he to be tried as a journalist?

Kristinn Hraffson: Journalists shouldn't be tried for publishing truthful information that is just impossible if we get there, and I will say it again, this is the worst attack on media freedom in the West, in decades and at least a century. If it's not contested and it does go forward, then we have basically seen such a blow to media freedom, that there is no turning back. You must question the essence of democracy, when media freedom is attacked in that way,

Sputnik: As your position as editor-in-chief, following on from Julian Assange, are you worried about your freedoms- About the fact that you might be targeted in a similar manner?

Kristinn Hraffson: I'm pretty sure that I am targeted in some manner, but whether a smear campaign will be solved against me. I just assume that might happen. Even some legal process, we know for certain that I and two of my colleagues are subject to an investigation by the secret court in Virginia. So anything can happen, but it is part of the job. People who are committed to working in journalism put themselves in danger, and all over the world, journalists are being killed in war zones, and difficult terrain. So it's nothing for us to complain about the fact that we might have to face some adverse consequences for our action. If you believe in some ideals as I believe in journalism, you do what needs to be done.

*The views expressed by the speaker do not necessarily reflect those of Sputnik.