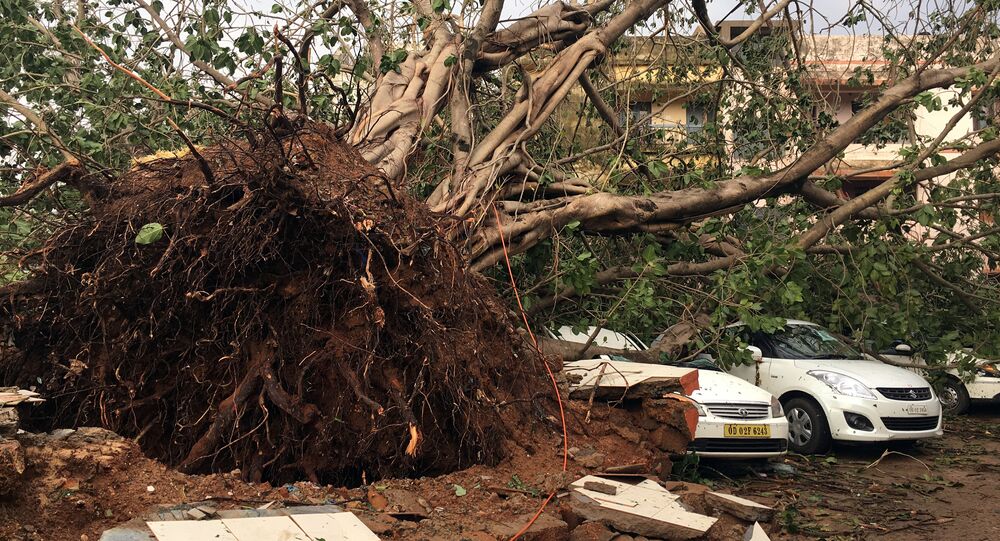 India’s National Disaster Response Force (NDRF) says that it has deployed 44 teams to actively monitor ongoing relief and rehabilitation measures in the country’s eastern state of Odisha following “Fani”, which has left a trail of destruction.

Although there were 30 casualties, he said, it pales in comparison to 1999, when approximately 12,000 people were killed in the same region when it was hit by a similar natural calamity.

He shared that all efforts are being made to provide relief and rehabilitation to people in the coastal areas of Odisha, including basic necessities like food, electricity, and restoration of communication following the devastation.

​In an Exclusive Interview with Sputnik, NDRF Director General Satya Narayan Pradhan cast light upon the overall endeavour of the National Disaster Response Force (NDRF) during the natural disasters.

Cyclone Fani has devasted Odisha. You can help #HelpRebuildOdisha by contributing to Odisha Chief Minister's relief fund at https://t.co/nc7zaQheKZ

You can transfer using the account details given in the video pic.twitter.com/5MTYZTJwXn

​Sputnik: How successful has the NDRF been in the rescue and rehabilitation of people during and after Cyclone "Fani"? How was it made possible?

Pradhan: First thing is that we got a prediction well in time, almost seven to eight days in advance as to the course of the cyclone and we got the exact timing of the landing and the place of the landfall, and also at which speed it will hit the land.

© REUTERS / Stringer
WATCH Monstrous Cyclone Fani Devastating Odisha, India
Along those points of maximum impact, in fact on the curve of the Odisha coastline, we posted 28 teams. That is what proved to be the game-changer ultimately. When the evacuation process was started, the people had to be convinced first to leave their homes, because that is not an easy task — because they would like to hang on to their property and homes. So it took almost 24 hours plus to convince them.

The state authorities and we were together in this to convince such people and then, after that, the transition took place from their old huts/houses to the cyclone shelters and more than 10.5 or 11 lakh people (over 1.1 million people) were transferred to these cyclone shelters.

​Sputnik: Would you describe this as a very successful operation by the NDRF?

Pradhan: I would certainly describe it as a very successful operation, although we never define it that way; it is our duty anyway. The strategy is always very simple, it should be zero casualty, if we go by the zero casualty approach; it has been very, very effective, because zero casualty in what was 12,000 in the '99 (1999) cyclone, which was of a similar nature.

So, we reached a double (casualty) figure of 30, so that way I think those who have died, they died because they exposed themselves and did not listen to the advisory and made some errors of judgment… Those who ventured out got caught… That way I will call it a successful mission.

Pradhan: Absolutely, I think it will take some time. The three areas which have been most affected by the cyclone are the Puri district, Khordha district, which includes Bhubaneswar city. So, these three places affected the urban aspects of Puri, Khordha, Bhubaneswar, as well as the hinterland of those three places. They are the most affected and they are the built-up areas and urban areas and Bhubaneswar being the capital. So obviously, the damage has been extensive; all the trees have been uprooted, power lines are snapped and disrupted. In fact, even the poles are bent or uprooted, and that has also had an impact on the communications.

Sputnik:  How much time, approximately, will be required for normalcy to return?

Pradhan: There are 44 teams active right now… in five districts. Of the 44, at least 35 are active in these three places, including nearly 20 teams in Bhubaneswar itself.

PM @narendramodi visited Odisha to review the situation arising out of Cyclone Fani. He took part in a meeting of senior officers of the State and Central Government to take stock of the damage and the relief and rehabilitation measures being undertaken. pic.twitter.com/sA354AjxPt

​Meanwhile, Odisha Chief Minister Naveen Patnaik told media outlets over the weekend that "People in cyclone shelters will be provided cooked food for [the] next 15 days and electricity and drinking water is being worked on war-footing so that it is supplied to people very soon. Condition is bad. Prime Minister (Narendra Modi) spoke to me. We are working very hard to restore communication too".

The state government has confirmed that the cyclone period has concluded, but there has been an enormous loss of livestock, crops, and other assets.