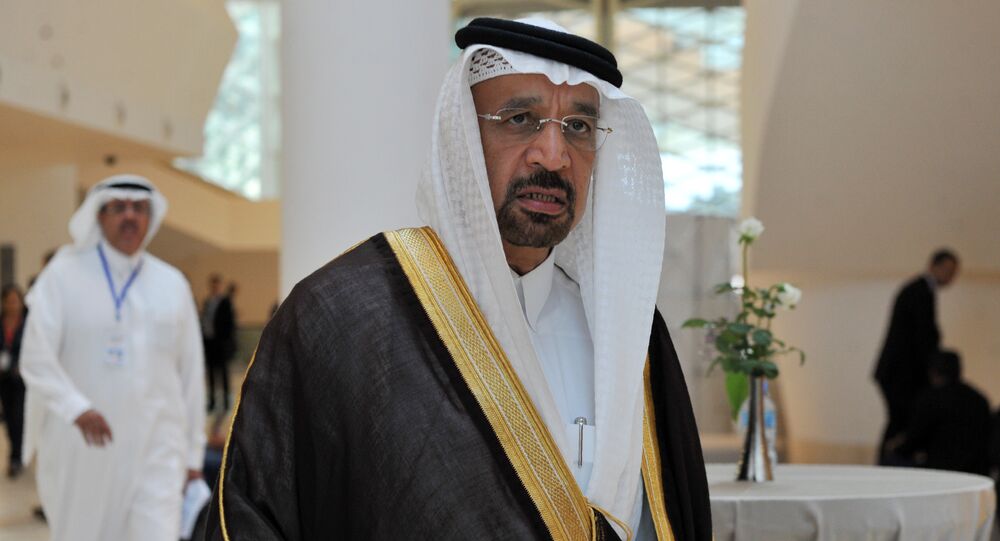 In an interview with Sputnik Saudi Arabia's Minister of Energy, Industry and Mineral Resources, Khalid Falih, has spoken for the first time about the current agreement between OPEC member states and non-cartel oil producers, as well as the impact of Iranian oil on the global market, and his participation in the St. Petersburg Economic Forum.

Sputnik: We know you will be in Moscow to co-chair an intergovernmental commission. Will you also participate in the St. Petersburg Economic Forum later in June?

Khalid Falih: Yes, my intent is to do both. I've been to the last two St. Petersburg Economic Forums, and I have found them to be quite useful, engaging, and well organised. It's always an opportunity, to not only meet with our Russian partners but to see people from around the world that are of interest to us. It's become an important global event, not just a Russian event. I intend to be there and following that we will have our intergovernmental commission on 10-11 June.

Sputnik: What documents do you plan to sign there, or are there any preparations for contracts?

© AP Photo / Hassan Ammar, File
Saudi Arabia Pledges to Stabilise Market as US Ends Iran Oil Waivers - Minister
Khalid Falih: What we plan to do is follow up on the implementation of many existing MOUs and agreements and expedite the progress on the existing frameworks. Some of them are quite broad, and there are many sub-agreements and sub-investments under them. I think the area that of course always offers the biggest opportunities between the world's two largest energy countries will be investments in energy and chemicals. So we will be advancing these discussions and follow up on their progress.

In addition to energy collaboration, science and technology, aerospace would be one area that we'd like to explore. We hope that we will advance collaboration in agriculture, especially purchases of some products from Russia for the long-term supply of Saudi food needs. Wheat hopefully is one of them. We are still waiting for some tests to be done by some regulatory agencies, but if everything is what we expect, there will be long-term procurement actions in place. Also, another area that is very important for us is culture, cultural exchanges.

We had a number of exchanges of cultural visits between our two countries. We hope that will grow, especially, as you have observed, Saudi Arabia is establishing a lot of activities in the areas of tourism and culture, and Russia has an advancement there. We'd like to see more, and a lot of diversity, in Russia as well. There's a large Muslim population, but there are also different ethnic groups in Russia that we'd like them to come and visit the kingdom and show off the heritage, arts and performances from different Russian regions.

Sputnik: Talking about the situation on the world oil market, Donald Trump said he had persuaded Saudi Arabia to increase the flow. Did he or someone from Washington call your side to discuss this matter? Will the Kingdom of Saudi Arabia increase oil output?

Khalid Falih: We have issued a statement after the American statement was issued regarding sanctions. We have made it clear about two things. First of all, we will meet the demands of our customers including those customers who are substituting Iranian barrels for Saudi barrels. I'm reiterating our commitment to meet all those demands. But we will do it while also staying clearly within the OPEC Plus agreement.

© AFP 2021 / Ryad Kramdi
Trump Says 'Very Important' for OPEC to Increase Oil Production
We don't need to exceed our voluntary limit of the OPEC Plus agreement to meet this. As you know until the end of May we will be significantly below that limit because our production is well under 10 million barrels a day and exports under 7 (million) until the end of May. So we will see what June requires but we think it will in any way exceed the overall production limit that we have committed too.

Sputnik: Were you contacted by Washington in this regard?

Khalid Falih: I am in discussions with energy ministers from producers to consumers multiple times a week, including from different countries, so I cannot tell you about that specific country and the specific day, but I can confirm that our relationship with the United States is very strong.

It is advantageous that we have consistent policies that seek to advance global market stability and energy security for the rest of the world. And we and the kingdom have healthy relationships with both countries from an energy perspective, and we try to bring everybody together in different ways to achieve that common objective.

Sputnik: On 3 May, a waiver for Iranian oil exports to some countries will come to an end, and in this regard, may OPEC+ consider a revision of the deal?

Khalid Falih: I think any revision will happen after July, and this is what President Putin said yesterday or the day before in China. And we will meet in May in Saudi Arabia, and we will meet in June in Vienna. And during those two meetings, we will look at the market fundamentals. The market fundamentals are impacted by many factors — the global economy, supply increases from some countries, and supply disruptions from others.

© AFP 2021 / Ryad Kramdi
'The NOPEC Law Would Be A Major Blow To Critical OPEC-US Cooperation'- Analyst
It is impacted, of course, by demand, and how we see demand. And the balancing factor between all this supply and demand is inventories. We will look at inventories if they are above the normal level or below. We will adjust our production accordingly. I am inclining to think today — based on what I see — I expect that there will be some level of agreement on production.

It could be the same as we have today, it could be slightly different, up or down, we don't know. I think my preference will be to try to calibrate the markets so that we have balance. And we will make that decision in June when we meet.

Sputnik: But overall, how do you estimate the impact of the Iran situation on the world oil market?

Khalid Falih: I have no idea. I think Iran's exports are always not very visible. There is a lot of speculation. What is the real number of exports today and what will be the real number after sanctions are withdrawn? The only indicator I have is how much customers are asking for Saudi oil. That's the number I see. And so far, it's moderate but healthy.

© Sputnik
Minister of Energy of Saudi Arabia Khalid A. Al-Falih

Sputnik: I see. You discussed several deals with the Russian Direct Investment Fund (RDIF), including buying shares in Novomet and Eurasia Drilling. How do you estimate cooperation with RDIF, and when these two deals may be closed?

Khalid Falih: Well, first of all, we really enjoy and appreciate our relations with RDIF. It's a first-class organisation, run very professionally by world standards, and, from all the information I have seen, all of the investment proposals they have made to us and to others have been high-quality.

But at the end of the day, transactions take time, so we have been negotiating to enter Eurasia Drilling, and I understand that there are some government constraints within Russia because this is considered strategic for Russia, so we are waiting for those regulatory clearances. Novomet is a small investment, and, as I understand, we are waiting for some technical aspects to be approved. So, hopefully, soon. And we will discuss it when we come to St. Petersburg in June.

Khalid Falih: No, I am not aware of it, but I would like to. If you can arrange for me to see one in St. Petersburg, I would love to. (laughs)

Khalid Falih: Okay. I am interested to see it. I know that Russia has great industrial powers. Of course, aviation and airspace is very strong. The industrial complex during the Soviet Union was very powerful. So I have full confidence that Russia has capabilities that are underutilised today.

And I am sure that if you want to make any product, you can make it. I am willing to buy one of these cars if I can afford them. Do you know how much they cost? (laughs).

Sputnik: Oh, it depends upon…

Sputnik: The model, the features. And one more question about the OPEC+ situation. President Putin recently said in Beijing that there were no indications that somebody is going to withdraw from the deal. But this topic is being discussed among analysts. Have you heard from someone or do you have any information that this could be done by someone?

Khalid Falih: No. I think that I have heard many discussions from ministers, and the majority of them want to extend. Almost all of them want to extend. But it has to be an extension based on facts and analysis that addresses the second half of the year. Like I said, our guiding principle is to manage global inventories. Not to go too high. And we will know more in two months when we meet in June.