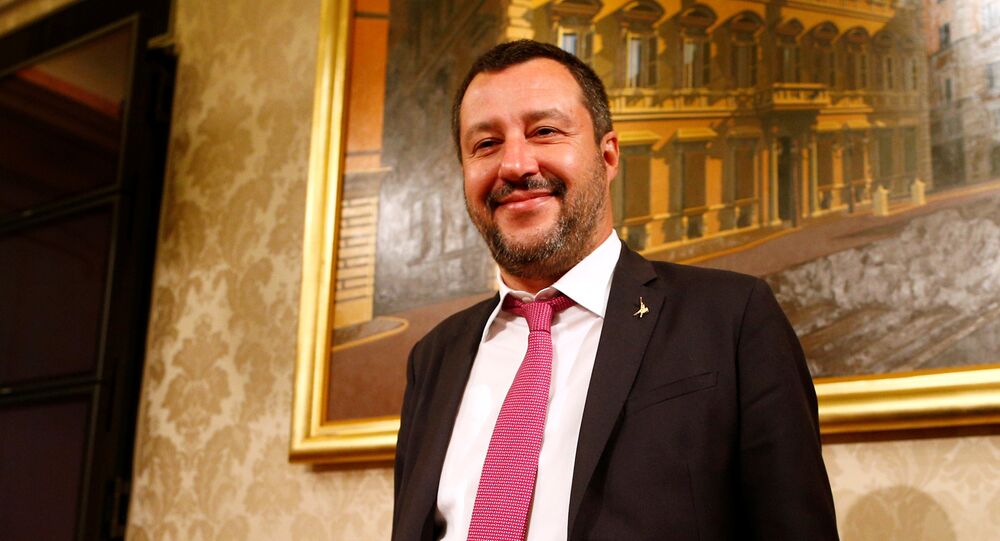 Radiant with joy, Deputy Prime Minister Matteo Salvini spoke on Monday at a press conference at Lega’s historic headquarters at Via Bellerio 41 in Milan. His party tripled its number of votes in the regional elections in Basilicata (in just one year, it grew from 6.2% to 19%).

Of course, Sputnik has asked Salvini about his predictions for the elections to the European Parliament, about how he and Lega see the fate of Europe, given that, according to the Confcommercio Report, presented on 22 March in Cernobbio, Italy is the most "Eurosceptical" country, along with the Czech Republic, and is seemingly ready for an "Italexit".

"Neither I, nor our government, has any plans to leave the European Union, but there is a conviction that it is necessary to change its laws and regulations in order to remain a member of the European community with a sense of self-respect and dignity", Salvini said in response to a question from Sputnik.

Sputnik: But Italians are very critical of the EU…

© AFP 2021 / LIONEL BONAVENTURE
Italian Wikipedia Shuts Down to Protest Upcoming Vote on EU Copyright Law
Salvini: Yes, obviously, the reality is stronger than propaganda. You can hang EU flags on the balconies, but what kind of Europe is that? One that with the Bolkestein directive (the Internal Market Directive 2006/123/EC on the laws of the single market — ed. note Sputnik) jeopardises 300,000 jobs, and with the European standards for agriculture and fishery — millions of jobs?

One that is imposed on us by the Fornero law ("Fornero" law — 2011 pension law, extremely unpopular in Italy — ed. note Sputnik), one that tells us that Italy cannot reduce taxes, one that did nothing to help us with the migration issue?

I recall that Prime Minister Giuseppe Conte has asked for a review of the existing norms established in the Dublin Regulation on the distribution of migrants since June last year — and nothing… Therefore, Italians, as the EU continues hitting them on the head, are asking themselves: "Why do we have to keep on paying for all this?"

My main goal is to save Europe, a renewed Europe, and Lega will do that. We are being called Eurosceptics, sovereigntists, populists, Nazis, fascists, racists, xenophobes, homophobes, and so on and so forth.

But it is we who will pour healthy blood into Europe's arteries again. Today, I have scheduled the first week of April for the first public conference to discuss what our idea of Europe is for the next 40 years. We will discuss these ideas with those of our allies with whom we plan to meet in Parliament in Brussels in July.

Sputnik: How do you plan to develop relations with great powers such as China and Russia?

Salvini: We will find mutual understanding with everyone: China, Russia, USA, Brazil, Israel, and Poland. We are committed to love, not to war…