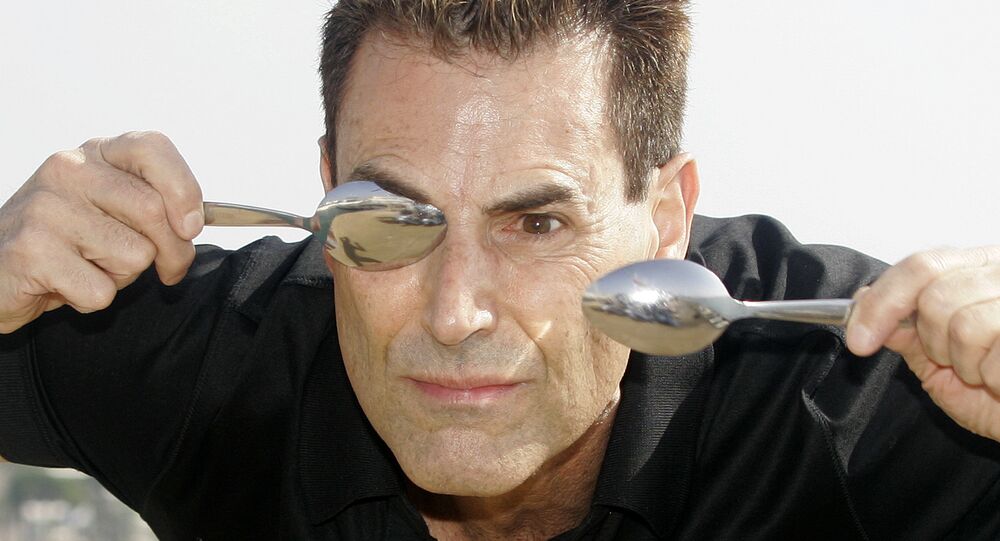 Over the years, famous psychic Uri Geller has bamboozled audiences worldwide with his capabilities, most notably, being able to effortlessly bend spoons using his mind and to the horror of Scottish football fans, deviating a ball before a penalty against the old enemy England. Sputnik spoke with Mr Geller to get an insight into his life and career.

Sputnik: At what point in your life did you discover you were psychic?

Uri Geller: I discovered my abilities when I was five years old, in Israel, in Tel Aviv, when I was eating soup and suddenly the spoon bent in my hand and actually broke, and that's when I discovered that I had some kind of a unique call it power, call it energy, call it talent.

I showed off with it at school, teachers were mind-blown, kids were amazed and as I grew older I simply developed it more and more, and to make a long story short then I became a famous or well-known all around the world.

© Sputnik / Anton Denisov
Kremlin's Psychic Rays? Alleged US Man on Red Square Claims Tunnel Dug to Latvia
Sputnik: Can you give our listeners any tips on spoon bending?

Uri Geller: When I get emails; I get emails every day, hundreds of emails and many come from teenagers and kids who ask me, oh please Mr Geller, and teach us how to bend a spoon, please.

My answer is the following; forget spoon bending, instead become a positive thinker, believe in yourself, focus on school, create a target goal to go to university, never ever smoke, never touch drugs and always think of success.

Today I realise that being a motivator of positive thinking is much more important than teaching someone how to bend a spoon, because that is almost impossibility.

© Sputnik
England vs Tunisia Match With a Twist: Watch Whiskered Psychic's Prediction (VIDEO)
So because I am what I am; and because people know me for mind power, it always acts as a placebo effect when something comes from me, when I say something to someone, it sets in much more powerfully than just an ordinary person who motivates others.

Sputnik: What do you have to say about the Scotland football incident, would you move the ball again?

Uri Geller: No, I would never do that again, because that was an unethical deed. I did it unethically, I realised later, I received thousands of hate letters from Scotland and this is why I bought a Scottish island, because I felt that I had to give something back to Scotland.

So that was interfering with a football game. Yes, I will inspire and I will motivate, but I will never ever use my mind power again to move a football.