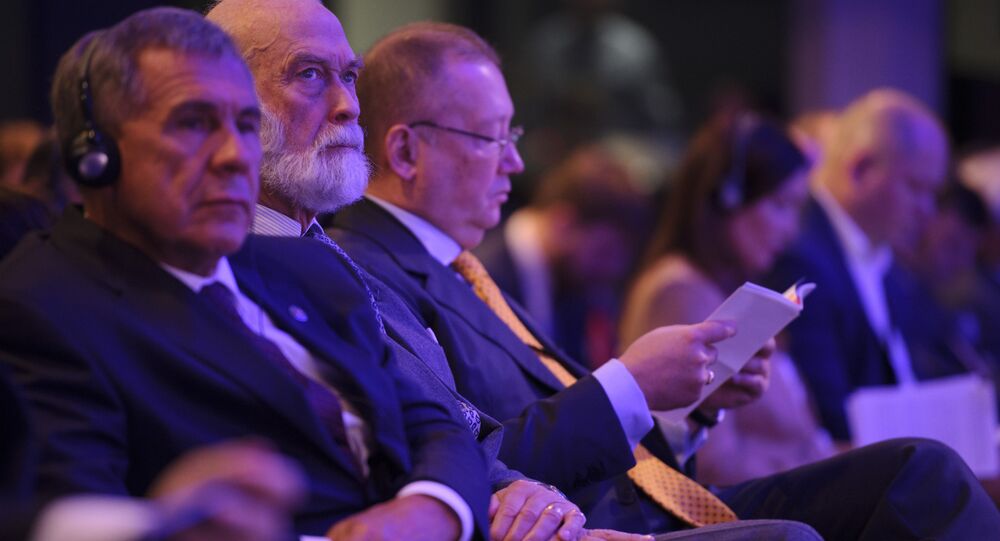 Several high-profile Russian officials spoke to Sputnik on Monday at the 2018 Russian-British Business Forum about multiple sectors for bilateral cooperation, including financial technologies (FinTech), emerging technologies, and the role of entrepreneurship in the digital age.

The officials told Sputnik that, despite ongoing political tensions, trade between Moscow and London has reached new highs and continues to grow in defiance of sanctions.

Аrkadiy Dvorkovich, Chairman of the Skolkovo Foundation and President of the World Chess Federation (FIDE) told Sputnik that there were "three technological areas that are high on [Russia's] agenda."

The Skolkovo Foundation was initiated via a decree signed by then-president Dmitry Medvedev on 28 September 2010 and charged with diversifying the Russian economy through innovative technologies through five key sectors: energy efficiency, strategic computer technologies, biomedicine, nuclear technologies and space technologies.

"Firstly, we work with pharmaceutical companies such as AstraZeneca and GlaxoSmithKline and have already begun some small projects, but would like to expand on those."

The Skolkovo Foundation's Moscow International Medical Cluster has very good options for developing medical technologies, which "can provide facilities for clinical research and develop new medicines as well as medical equipment with other companies," he mentioned.

"Thirdly, we utilise 5G and Internet of Things, where we can cooperate on an international scale", Mr. Dvorkovich continued. "We have already begun collaborating with Finnish telecom company Nokia as well as Japanese and Korean partners, but welcome British partners as well."

Dr. Boris Abramov, Trade Representative of the Russian Federation in the United Kingdom, told Sputnik about the differences in business and political attitudes to UK-Russian relations.

"This attitude is a very good thing for growing bilateral trade, which was almost 29 percent ($10bn) in the first nine months of this year compared to the same period in 2017," he continued. "We definitely expect to exceed last year's figures and should arrive at $14bn this year."

He stated in his speech that trade from Britain to Russia "demanded internal and external supportive measures" and that Russia "should strike to support British businesses entering the Russian market effectively".

"The moment to begin those new successes is today," he told the audience.

Boris Titov, Presidential Commissioner for Entrepreneurs' Rights told Sputnik about the role of emerging economies and FinTech in the development of bilateral ties between the UK and Russian Federation.

"Russia is one of the leading countries in digital technologies, especially in blockchain," Mr. Titov said. "Blockchain speaks two languages — Russian and English."

"Britain is very much developed in the area of digital governance and management, where Russia is a bit behind," Mr. Titov continued. "I think that gives us great opportunities for bilateral contracts and projects as we have a lot of great people who can work efficiently and focussed in such a potentially lucrative area. I think this will be the leading sector that will bring us together."

"Everybody understands now that FinTech is the future because it brings down costs and facilitates procedures, which is why several tech giants are working together with banks to promote technologies which will be very important in the future", he stated.

"When living under the circumstances created by the Fourth Industrial Revolution, we must promote trends in innovative entrepreneurship in order to shape a brighter future in bilateral cooperation," he said. "There are no boundaries between countries."

"This is why we can cooperate globally and independently regardless of location," he continued. "Russia is a world leader in education, especially in the tech sector, which is why we are able to cooperate with developed countries in fruitful areas like blockchain, VR, green projects and other tech industries, so let us work together on that matter."

The Russian-British Business Forum is held annually between leaders and experts from both countries in order to strengthen cooperation between Moscow and London via speeches as well as platform and roundtable discussions. The event took place at the Queen Elizabeth II Conference Centre in London's Westminster district on 26 November.