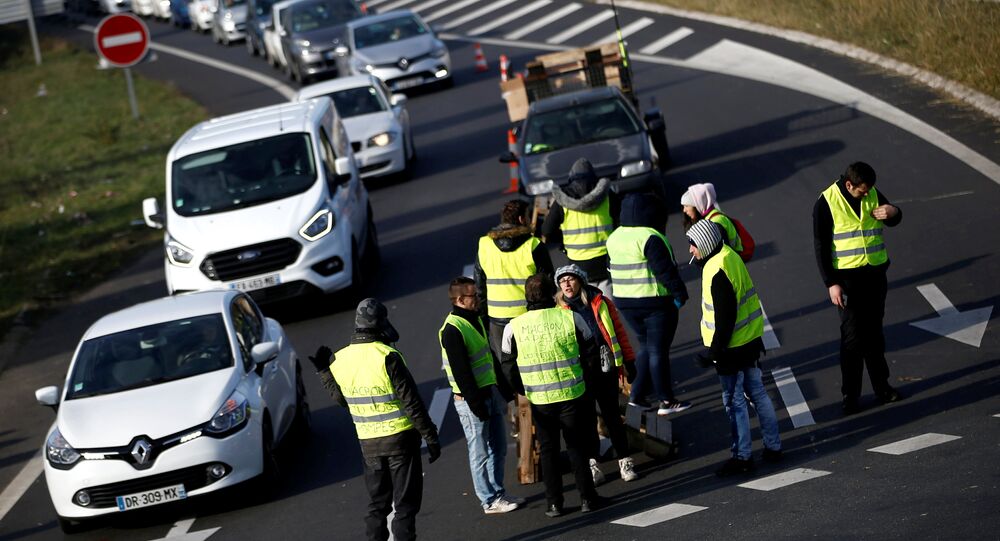 MOSCOW (Sputnik) - Saturday's protests in France, which were supposed to be a one-day event staged by the drivers against fuel prices rise, saw some 400 people injured.

The demonstrations have lasted for five days, turning violent on the island of Reunion, France's overseas department, where about 30 security officers have been injured and 109 activists have been arrested.

As Rodolphe Kujawa, a "yellow vest" activist in France's Provence-Alpes-Cote d'Azur region, explained to Sputnik on Thursday, the rallies are more than just a rebellion against the fuel prices hike and reflect the popular discontent with the tax burden in general.

"The anger was triggered by the fact of the fuel's becoming too expensive, it was the last drop, but the real problem is all the French taxes. You have an income tax, social tax, employers’ contribution, wage cost and many more. And, finally, people do not have the same purchasing power, same liberties. Today people are united for the bigger form of liberty and equality, regardless of their social class, everybody wearing a yellow jacket is standing for the same thing," he said.

According to Kujawa, the French authorities continue taking unpopular decisions and do not listen to the opinions of the country's citizens, for whom taking their protest to streets remains the only way to make their voices heard.

"It’s the French politics that stirred this global frustration. It’s a tax pressure and purchasing power that make people take to streets to be heard. Political and economic action in France does not satisfy the majority of the people … Those are fundamental every-day problems for people," Kujawa argued.

He added that the political tradition in France was following increasingly undemocratic trends, with politicians imposing their decisions on the population instead of representing their voices.

"The current political system in France does not hear the people. There are bills being voted, but those are the laws not based on what the people say. So people are rising up," Kujawa stressed once again.

Kujawa revealed that the "yellow vest" protests were inspired by the idea to set up a so-called citizen assembly, whose members would come up with solutions to the real needs of the population.

"The idea behind the 'yellow vests' is putting in place this citizen assembly which will be taking into account the sovereignty of the people. We are composing the citizen assembly to give people the power to be heard… We need to act much more referendum-like, but for now it is not the case," he said.

In late 2017, the French government approved the decision to raise the direct tax on diesel fuel, which is the most popular type of fuel in the country. The diesel prices in France has risen by around 23 percent since the beginning of the year, while the gasoline price has gone up by 15 percent. Prices are set to increase further in January.

Despite the wide public discontent triggered by the step, the French government has ruled out reversing the decision, pledging to adopt more measures of social support to relieve the citizens' tax burden.