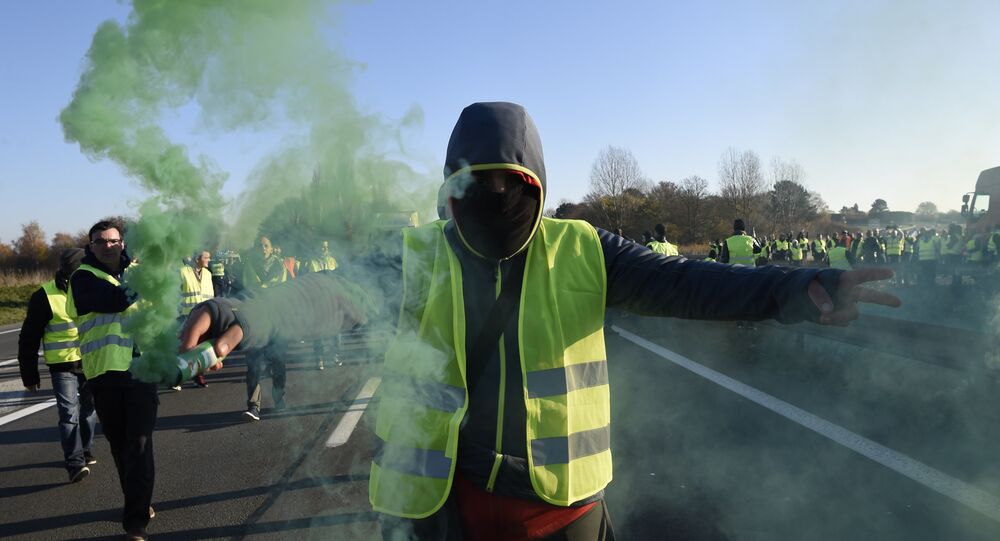 PARIS (Sputnik) - Thirty security officers have been injured in five days of clashes with protesters over soaring gasoline prices in the French overseas territory of Reunion, the government spokesman said Wednesday.

"The latest data on Reunion was shared with us by the cabinet. There were 109 arrests, 30 law enforcers were injured, including 16 police officers and 14 gendarmes," Benjamin Griveaux told reporters.

Thousands of demonstrators have taken to the streets, he said. Hundreds of security officers are out to maintain order. A further 80 gendarmes will be deployed to the Indian Ocean island from Paris soon.

Earlier in the day, France Info broadcaster reported, citing local authorities at least 16 police officers were injured in clashes with "yellow vests" protesters, who oppose rising prices for fuel, in Reunion, a French overseas department in the Indian Ocean.

According to France Info, clashes between young protesters and police took place overnight into Wednesday with one police officer being critically injured in an accidental blast in the car, where he was sitting.

Other media reports said that demonstrators threw stones and Molotov cocktails at the police officer and a total of 108 people have been detained since Saturday.

© Sputnik / Julien Mattia
Four Men Face Charges of Plotting Attack Amid Fuel Protests in France - Reports
The price of diesel in France has risen by around 23 percent this year, while the gasoline price has gone up by 15 percent. Prices are set to increase further in January. From January 1, 2019 prices for gasoline in France are expected to increase by 2.9 eurocents and for diesel — by 6.5 eurocents per litre.

The movement against the increase in fuel prices has been called "yellow vests" in the name of the obligatory attribute of French drivers — a yellow light-reflective cape.