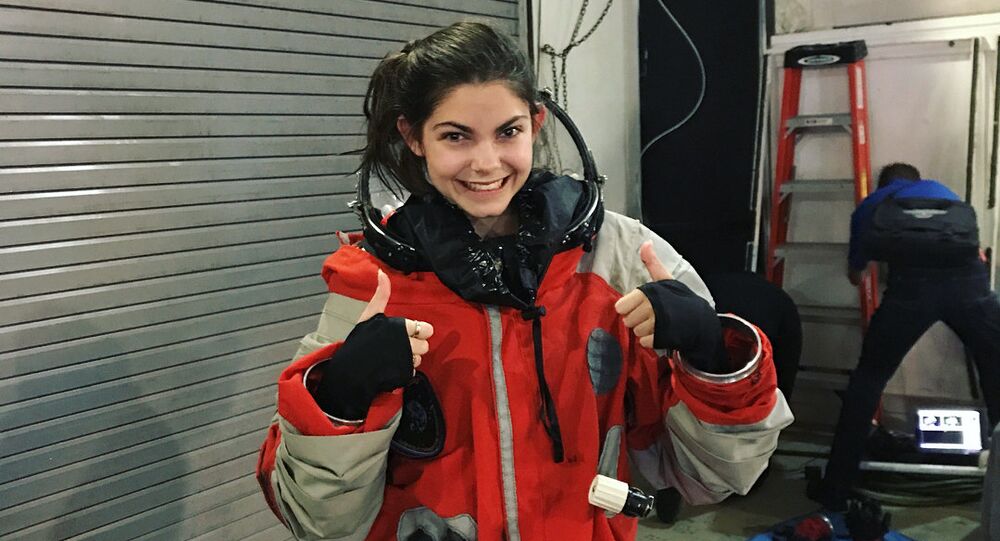 'Baby Step to Explore Space': US Teen on Her Journey to Become 1st Human on Mars

Seventeen-year-old Alyssa Carson from Louisiana is preparing to become the first human to set foot on Mars. She is currently undergoing training to become an astronaut and ultimately travel to the red planet. Radio Sputnik spoke with Carson about her passion for Mars.

Sputnik: Alyssa, please tell us, what do you find most fascinating about Mars?

When I was young, it was all about the curiosity of it and not really knowing what was there and as I have grown older, I just wanted to learn more and more about it and kind of researched on how I can go there and contribute to the mission.

© Photo : family archive
Alyssa Carson
Sputnik: Well tell us about your training. What has been the most memorable part of your training?

All my training, which has been through a group called Possum Academy; their mission really is studying clouds in the upper atmosphere so they are preparing people for [flight]. So that we can help them with their research, help the final frontier design […]. I have been able to do things like micro gravity training, underwater survival training, decompression training, and lots more.

Sputnik: Alyssa how do you feel about being a part of something so huge and amazing as preparing to be an astronaut who is preparing to travel to Mars?

I think that really I [couldn’t] imagine myself having another job or going to another class so for me it’s super exciting and everything we get to do is super fun so really just looking forward to the future and being able to do more.

Sputnik: What are your expectations from the moment you set your foot on the Red planet?

I mean when we can get to Mars I am looking forward to kind of setting up a home base and then just continuing to experiment. I am willing to study astrobiology and with that my main goal with the mission to Mars would be to do research there, such as on water samples… trying to find out more about the history of Mars and find out more about our Solar System as a whole.

Sputnik: Alyssa you are also one of the seven ambassadors representing Mars One that has a mission of establishing human settlement on Mars. How do you envision a human colony on the red planet?

I think the human colony on Mars would be a very cool way of just starting the whole process of people living on Mars, which would be absolutely insane, but I think the colony could get lots of things done. It could be very different; just imagining having to put on a space suit and helmet every time you want to step out of your house. It would be just super strange but I think we would eventually adapt to it. But it would be a very [cool view] to continue to do scientific research there without waiting for the long journey there, and then having to come back and all these things, but it will have to be a very select group of individuals.

Sputnik: So far we have heard that the Mars One mission is a one way mission to the Red Planet. Am I correct?

Yes, Mars One Company has their goal to kind of start a Mars colony, of having those people go there and just living there […]

Sputnik: How do you and your parents feel about you travelling to Mars and probably never returning back?

Obviously there are different agencies with different ideas about what they want to do with the mission to Mars. So Mars One, they want the one way. There are other companies who are planning a return mission so right now it’s not sure which one, [what] our mission to Mars is going to look like, given which company to go with. Even so, […] but if it were a one way mission, I would still want to go and continue the mission. But I would prefer to come back and continue doing the research back here on Earth and continue to inspire kids to follow their own goals.

READ MORE: A New Species? Kids Born on Mars May Differ From Us

Sputnik: Will you continue working as an astronaut after the Mars mission?

After the mission to Mars I probably wouldn’t go to space again and that’s just because of how much bone density and muscle I am going to [loose] while I am in space because I wouldn’t be using my muscles as much as I use them here on Earth.

So after having a Mars mission which is going to be the longest mission that we have had people in space, I wouldn’t want to have that risk of putting myself in space again and having to come back to Earth. So I would probably not go to space again but I would continue the research that I started and continue to do things here on Earth.

Sputnik: Alyssa I read in one article that you also wanted to become a teacher and a president. Do you still want that?

With that it was more like talking about how, you know, I did the same thing that every other kid did. I wasn’t thinking just about being an astronaut when I was younger, but the way I always thought about it was that I would become an astronaut, go to Mars and then be a teacher or whatever the job may have been at the time.

But for some reason being an astronaut and going to Mars always stuck out for me and it’s still the one sticking out for me and it’s what I am working on. But somehow as a kid I did the same thing like everyone and I said that I wanted to be all these different careers.

READ MORE: 'If There's Life on Mars It's Likely to be Primitive Organisms' — Scientist

Sputnik: Alyssa what are your best hopes for future explorations beyond Mars?

Really I am hoping that the mission to Mars is kind of the first baby step so that we can explore further into space. Hopefully, after this generation that is going to Mars, there will be another generation who are looking towards Jupiter and hopefully further […].

But, I think Mars is our next baby step and with the mission to Mars, I am hoping that everyone and all the space agencies come together and have more of an international mission.

So almost like an international space station that has a mission to Mars, to have members from ESA, NASA, and from the Russian Space Agency, kind of everyone coming together and contributing to this big step for everyone.