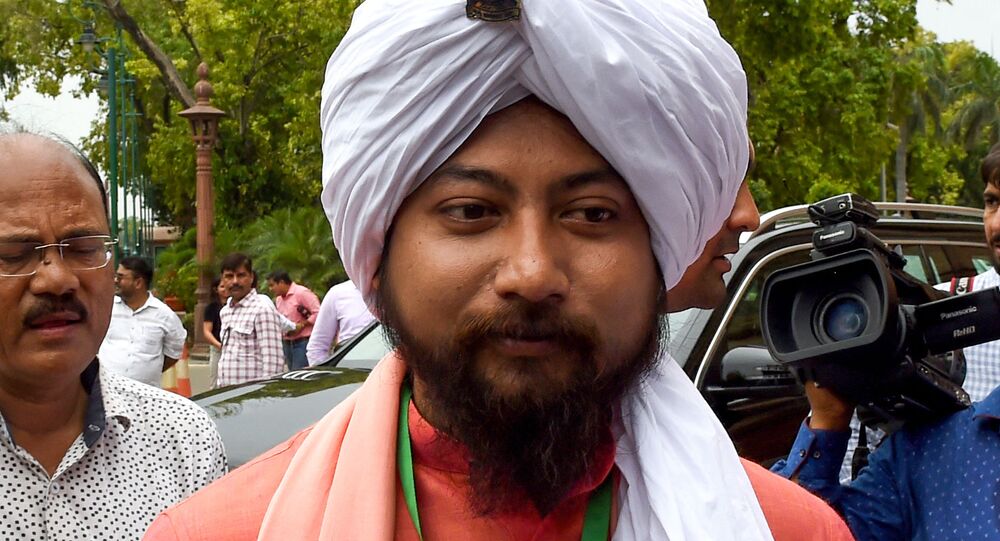 Nisith Pramanik, the junior home minister in Prime Minister Narendra Modi's cabinet, is the youngest lawmaker to be appointed in the Union government.

India's main opposition party Congress has accused the newly appointed federal minister, Nisith Pramanik, of being a Bangladeshi national. The 35-year-old is the youngest lawmaker to be appointed a federal minister in the Union government.

In a letter to Prime Minister Narendra Modi, Congress lawmaker Ripun Bora wrote: “As per the report published in a news channel, Nisith Pramanik is a Bangladeshi National. His birthplace is Harinathpur, under Palasbari P.S., District – Gaibandha of Bangladesh. He came to West Bengal for computer study and after taking a degree he first joined Trinamool Congress (TMC) and later joined BJP and was elected as MP (lawmaker) from Cooch Behar."

BarakBanglaNews, RepublicTV Tripura, IndiaToday & Business Standard publishes, @NisithPramanik is a Bangladeshi national. Its a matter of grave concern that a foreign national is an incumbent union minister. Urging PM @narendramodi in a letter to conduct an enquiry to clarify it. pic.twitter.com/5Td0xIoG8n

However, Pramanik's details on the Indian Parliament website mention Dinhata city in the Cooch Behar District of West Bengal as his birthplace. Interestingly, there is also a village named Harinathpur in West Bengal's Jalpaiguri district.

Joining the chorus demanding Pramanik come clean about his nationality, Trinamool Congress (TMC) leader and West Bengal Minister Bratya Basu wrote, "Did no amount of background check happen before his appointment?! And let's not forget the innumerable criminal cases."

Several news channels have reported that @NisithPramanik is a citizen of Bangladesh. Did no amount of background check happen before his appointment?! And let's not forget the innumerable criminal cases...

​This accusation comes amid Modi's alleged bid to set up a pan-India National Register of Citizens (NRC) to keep an official record of legal Indian citizens amid reports of Bangladeshis "illegally" entering the country.

The recently conducted NRC exercise in India's northeastern state of Assam excluded 1.9 million people from the final list. The opposition claims that the NRC will be used to target the country's religious minorities.

Sources in the Bharatiya Janata Party (BJP), who are close to Pramanik, denied the allegations when asked by Sputnik.

"This is just another political vendetta. They are running out of things to point fingers at us during the Monsoon Session of Parliament, so now they are cooking up stories. If they are so confident, they can go to Court,” sources said.