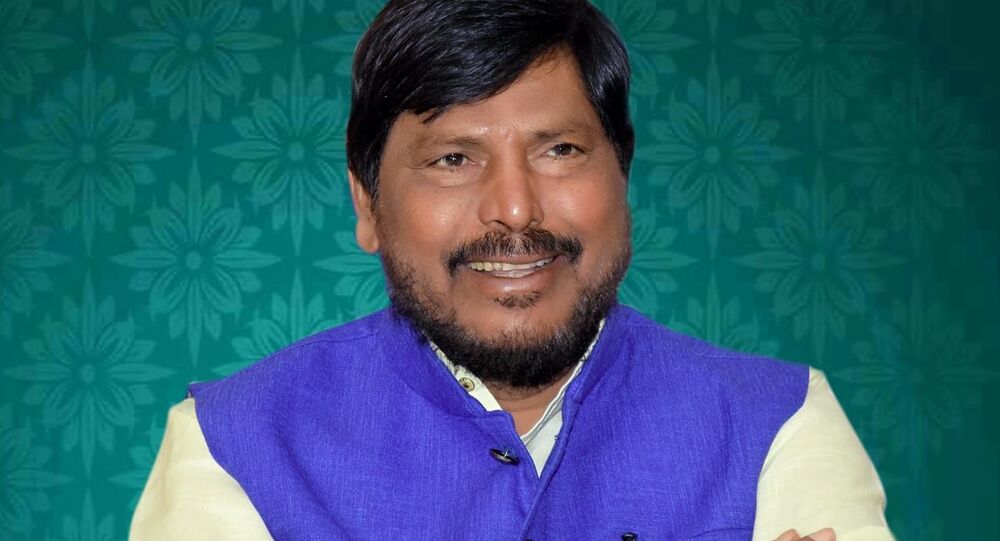 Republican Party of India President and prominent Dalit leader Ramdas Athawale is serving as minister of state for social justice and empowerment in the Modi-led federal government of India.

Athawale recently led his party's protest at Azad Maidan in Mumbai, demanding a 5 percent reservation quota for Muslims. He spoke to Sputnik about the recent cabinet reshuffle of the Modi government, among other things.

Sputnik: How do you view the cabinet reshuffle by Prime Minister Narendra Modi?

Ramdas Athawale: The decision to reshuffle the cabinet in the second year of Modi's second-term as Prime Minister is a visionary decision. Representatives from across the sections and states have been given a place in the new cabinet. It seems to be a balanced Council of Ministers. Until now, several ministers had additional charges due to which they were overburdened.

With more ministers in the cabinet, the Narendra Modi-led government will work more effectively towards the development of the country.

Sputnik: Several big names have been dropped and the opposition is accusing that Harsh Vardhan has been made a scapegoat? Don’t you think this will lead to discontent among the leaders?

Ramdas Athawale: The Bharatiya Janata Party (BJP) follows its discipline. Everybody abides by the decision taken by the party so there is no question of discontent. The ministers who have not been included in the cabinet served the country for many years. Now, others should also get a chance. So the decision made by the Prime Minister is fair.

Harsh Vardhan was relentlessly working when the pandemic was wreaking havoc. We need to understand it was very difficult to control the pandemic in a country like India but still, the government managed to do it efficiently.

As far as allegations of the opposition are concerned, they should take care of their party rather than poking their nose in the matters of the BJP, which follows a democratic process.

Accusations like the government failed to handle the pandemic are baseless. We agree that Indians have faced difficult times and witnessed the deaths of loved ones but the government was continuously working towards ramping up the health infrastructure.

On one hand, states like Maharashtra complain about the shortage of vaccines but on the other hand, they claim a record number of vaccinations. So from where did they get the vaccine? The Modi government has provided it. The federal government is distributing the vaccine to every state.

Therefore, the opposition is raising such issues without any facts.

Sputnik: It's been said that you have been sidelined by the party. Is this true and will you quit the Narendra Modi-led National Democratic Alliance government if this happens?

Ramdas Athawale: All such reports are baseless. The BJP has not sidelined me. Not a single member of Parliament is from the party, still, I have been given a minister of state (junior minister) portfolio. Prime Minister Narendra Modi trusts me and I have huge respect for him. I am satisfied with the portfolio given to me.

Sputnik: Dalits are still being humiliated by upper caste Hindus in several states. Why has the government failed to provide them security?

Ramdas Athawale: The federal government is making all efforts to provide security and respect to the Dalits. Scheduled Caste and Scheduled Tribe (Prevention of Atrocities) Act, 1989 was formed and then it was amended also.

It is true that Dalits are being humiliated but there has been a huge change in the thinking of the people. More than 100,000 inter-caste marriages are happening now.

However, a few people from the upper caste still believe in casteism. It is not easy for them to see a Dalit progressing. Apart from this, they are also angry with the Dalits because they get the reservation and this is why I had demanded reservation for the economically weaker section of upper caste.

Demand for reservation from various other castes has been coming up repeatedly. If the court says that reservation can’t be more than 50 percent then the government should consider making amendments in the Constitution.

If the benefits of reservation are extended to everyone equally, then we can expect that the differences between the upper castes and Dalits can be removed.

Sputnik: You recently said that had Devendra Fadnavis taken your advice, he would have been the state chief of Maharashtra. What advice did you give him?

Ramdas Athawale: It was during the 2019 state Assembly elections when the BJP emerged as the largest party in the state and the Shiv Sena was the second largest party while the Nationalist Congress Party and Congress were at number three and four respectively.

It was difficult for any party to form the government in the state without the support of Shiv Sena. Taking this as an opportunity, Shiv Sena chief Uddhav Thackeray demanded the state chief post for half of the tenure but the BJP didn’t agree to it as they thought that the NCP and the Congress will not support Shiv Sena.

However, things didn’t go as per the anticipations of the BJP and the Shiv Sena, NCP and Congress formed the government under a common minimum programme with Uddhav Thackeray as state chief.

So, that time I had said that Devendra Fadnavis should have agreed to the demand of Uddhav Thackeray so he would have been the state chief at the moment.

Sputnik: Do you think Shiv Sena and the BJP can come together again?

Ramdas Athawale: Not only I but the people of Maharashtra also want that the BJP and Shiv Sena should come together. Shiv Sena’s alliance with the NCP and Congress will never benefit the former.

A member of Legislative assembly of Shiv Sena Pratap Sarnaik has also written to Uddhav Thackeray to rethink over alliance with the BJP.

Sputnik: How do you see the seven-year tenure of the Narendra Modi government?

Ramdas Athawale: Narendra Modi is a responsible and visionary PM. Various schemes like Ujjawala Scheme, under which women even in rural areas got the cooking gas connection, Jan Dhan Yojana, which connected more than 410 million people through the banking system, Pradhan Mantri Awas Yojana (Prime Minister Housing Scheme), and many such schemes have helped the common man.

The most important thing is that the Modi government has always lived up to its slogan "Sabka Saath, Sabka Vikas" (Collective Efforts, Inclusive Efforts).

The Congress and other opposition parties have levelled false allegations and spread fake propaganda against the government among Muslims and other communities.

Sputnik: There is a row over the post-matric scholarship scheme for scheduled caste students in Punjab. The state government has paid 40 percent of the $30 million and said that the rest 60 percent is to be paid by the Social Justice and Empowerment Ministry. So when will your ministry pay the rest of the amount?

Ramdas Athawale: We started this Scheduled Caste post-matric scholarship scheme and allocated INR 15,000 crore ($2.3 million) for it. It is true that the federal government provides 60 percent of the funding while the rest is to be paid by the state government.

Every state government sends the report to the ministry and we release the fund. As far as Punjab is concerned, there were some discrepancies noticed in the scholarship distribution. We had asked the state government to share the report but till now we have not received any report.

We can’t give the money to those who don’t deserve it.