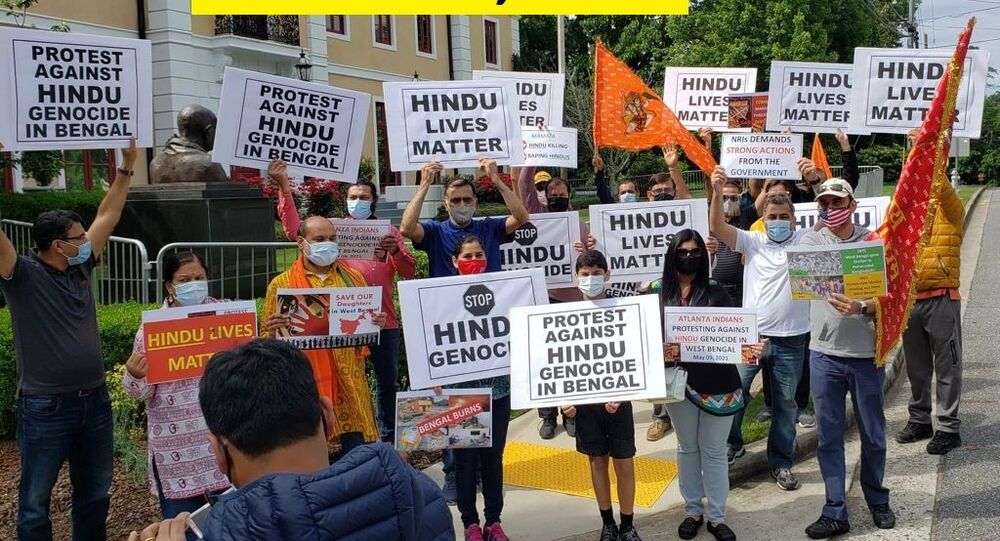 West Bengal, a state that was once considered a byword for Indian culture, has recently witnessed large-scale violence, arson, looting, and unabated vicious political attacks hot on the heels of a turbulent set of state assembly elections.

Indians living all over the world, including the Bengali diaspora, have been carrying out protests in more than 30 countries demanding stern action against the perpetrators of Bengal violence. They held the placards which read ‘Hindu Lives Matter’, ‘Hindu Genocide’, ‘Mamata Stop Hindu Killing’.

“The widespread post-poll violence in West Bengal is reminiscent of the atrocities people had to face during the country’s partition. I had heard of the atrocities committed during partition, but I have never seen such post-poll violence as is now taking place in West Bengal after the declaration of election results,” Tito Mukherjee, a California-based non-resident Indian, told Sputnik.

Expressing grave concern, Polly Das from Ottawa, Canada, said that Hindus in Bengal are terrified and those responsible for law and order in the state are just turning a blind eye to the chaos there. “The federal government should take seriously the unresponsive attitude of the Mamata Banerjee-led government and take fitting action. Where even the security forces are not safe, it is easy to guess how bad things are for ordinary citizens!” Das added.

The Vishwa Hindu Parishad (VHP), a sister organisation of the Bharatiya Janata Party (BJP), the federal governing party and the main opponent of the Mamata Banerjee-led Trinamool Congress in West Bengal, has launched a “Save the Hindu” campaign in the state. It has claimed that at least 5,000 Hindu households have been demolished, making 11,000 people homeless and 40,000 severely affected in post-poll violence that erupted after 2 May when the election results were announced.

“The post-poll violence in Bengal under Mamata Banerjee’s watch has brought West Bengal into global disrepute. There are massive protests across the globe. Indians living abroad including Bengali diaspora in 30 countries and five continents are demanding justice for Hindu victims,” Amit Malviya, a senior member of the Bharatiya Janata Party, told Sputnik.

However, other parties said that all protests in other countries are being sponsored by the BJP to divert attention from its failure in handling COVID-19 in the country.

“Any violence that happens is condemnable but both the BJP and Trinamool Congress are to be blamed for this. As for protests being organised in various parts of the world, they are sponsored by the BJP to divert attention from the present situation of our country. It has failed miserably in handling the pandemic here and is now playing up propaganda”, Subhankar Sarkar, Congress leader, told Sputnik.

Chandrima Bhattacharya, a leading member of Trinamool Congress and West Bengal's Minister of State for Urban Development, Refugee and Rehabilitation said that what the BJP is doing in India is known to everyone and as far as protests against post-poll violence in other countries are concerned, "we have nothing to do with it".

Meanwhile, a senior leader of the Communist Party of India, Tanmoy Bhattacharya, said the protests are a democratic right.

Violence rocked parts of West Bengal after the Assembly poll results were declared earlier this month. It is alleged that the perpetrators in most of the cases belong to the ruling Trinamool Congress. Reports say that around 17 people have been killed in the violence while many have been injured.