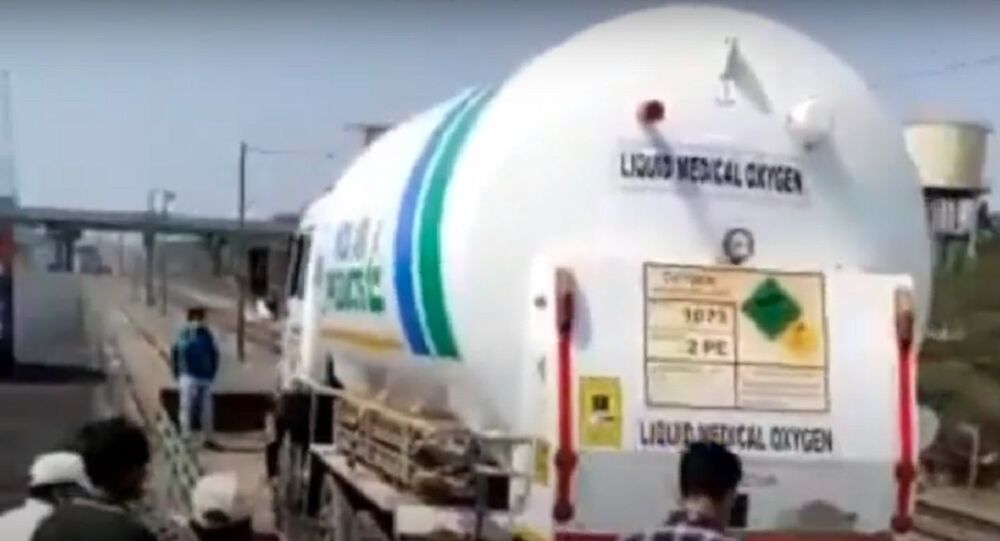 In the state of Madhya Pradesh, six COVID-19 patients died in the intensive care unit (ICU) of Shahdol Medical College on Sunday allegedly due to a shortage of oxygen, the Indian Express reported. Hospital authorities refuted the claims, saying jumbo oxygen cylinders were pushed into service when the hospital's oxygen tank supply dried up.

Faced with a shortage of oxygen required by hospitals for treating COVID-19 patients, the Indian government has taken a string of measures to ensure its availability as more and more states are demanding backup.

The Indian Railways on Monday began the groundwork for running "Oxygen Express" trains for the transport of liquid medical oxygen (LMO) and oxygen cylinders. The Ministry of Railways said in a statement that it has explored the technical feasibility of transporting LMO tankers at the request of the Madhya Pradesh and Maharashtra governments.

The ministry said that a green corridor is being created to ensure fast movement of Oxygen Express trains after the completion of technical trials. Officials said that 162 Pressure Swing Adsorption oxygen plants are being installed in 32 states and union territories from the PM CARES fund and 100,000 cylinders are being procured.

A statement by the Ministry of Health and Family Welfare said that several states in the country have reported shortage of medical oxygen for treatment of COVID patients. In view of the rising demand, India has banned the supply of oxygen for industrial purposes by manufacturers and suppliers from 22 April.

The decision to restrict the supply of oxygen for industrial purposes was taken by the Department for Promotion of Industry and Internal Trade to facilitate its freeing up for use as medical oxygen for treatment of COVID-19 patients.

However, nine industries including pharmaceutical, steel plants, nuclear energy facilities, and waste water treatment plants have been excluded from the ban on supply of oxygen.

With India in the grip of the second wave of coronavirus, the state governments have been flagging the issue of oxygen shortage that hospitals have been facing. Madhya Pradesh has seen a steep rise in its oxygen combustion from 64 metric tonnes consumed on 22 March to 330 metric tonnes on 18 April.

Speaking to Sputnik, a senior health official frpm the state government of Punjab said, "We have also flagged the issue of oxygen shortage to the federal government though our demand has not been taken up as yet. We hope to get relief soon".

A decision has been taken to start transportation of oxygen cylinders or tankers in trains. Green corridors to be introduced to ensure fast supply of oxygen:Union Minister Piyush Goyal to ANI pic.twitter.com/bmZaauWWgE