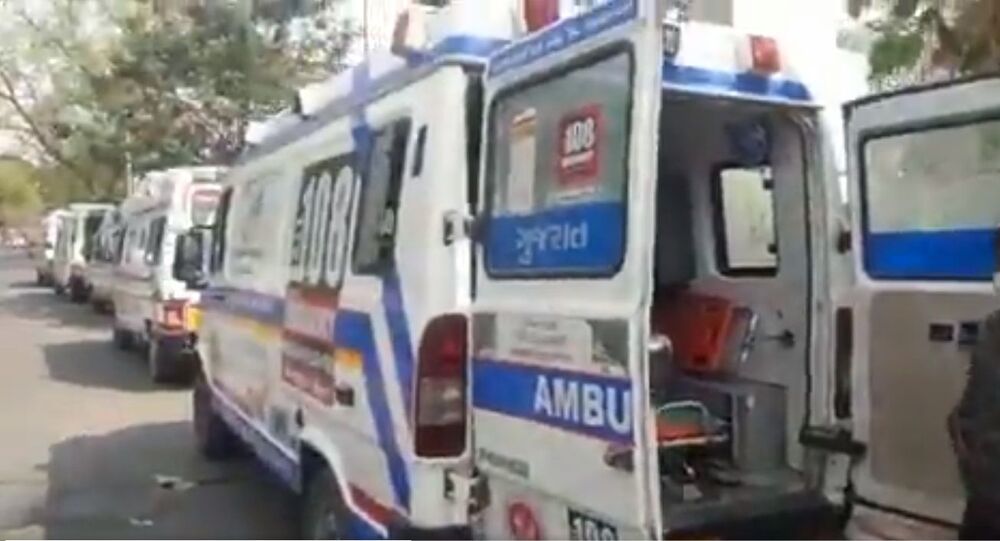 Earlier this month, images from the city of Surat in Gujarat state showed ventilators being transported to hospitals in garbage trucks amid ambulance shortage.

On Tuesday, several ambulances carrying COVID-positive patients were lined up outside the Civil Hospital in the Indian city of Ahmedabad in Gujarat state, as seen in videos posted by locals on Twitter. With 1,200 beds, Civil Hospital is the largest facility prepared to deal with the virus in the city.

© Photo : YouTube/ Real News Surat/screenshot
Ventilators Transported in Garbage Trucks in India's Surat City Raises Concern as COVID Cases Rise
Summer has officially begun in India and like most of the country, Gujarat is warming up fast. Photos of the ambulance-queue outside the hospital show patients sitting inside the vehicles, some gasping for air, with the doors wide open.

​Similar images from outside other hospitals in Gujarat have also been surfacing online for some days now.

​Along with medical equipment and beds, Gujarat is also suffering a shortage of mortuary trucks to transport dead bodies for cremation.

Locals are renting mini-trucks called “tempos” to carry their deceased kin to the crematoriums, as shown by more photos on social media.

​In fact, the crematoriums are so full that traditional Indian-style funerals that involve setting the dead on fire atop a pyre are being conducted out in the open.

Residents of Gujarat have been urging people to stay at home in a bid to stem the spread of COVID.

Amid the rising cases, goldsmiths in the state's Rajkot city were distributing gold nose pins and hand blenders to encourage people to get vaccinated against COVID.

Recognising the "health emergency," the Gujarat High Court has initiated a Public Interest Litigation (PIL) over the situation, which is being handled by the Bharatiya Janata Party (BJP) government that rules the state.