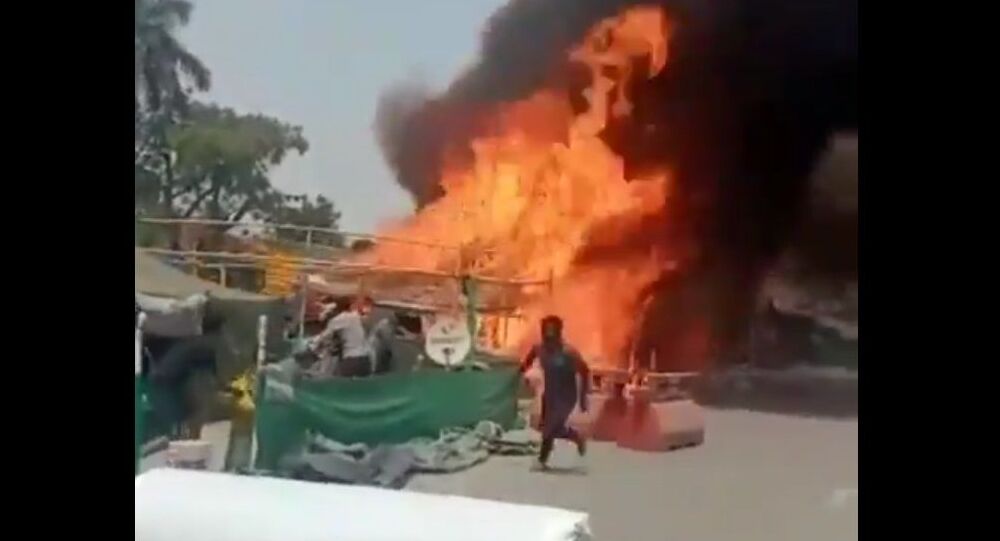 Ever since India's parliament passed three agriculture liberalisation laws in September 2020, the Narendra Modi government has faced protests and criticism from opposition parties. Farmers have protested by blocking railway tracks and marching on the capital and other cities to agitate and voice their collective demand that the laws be revoked.

"You can send in your goons, frighten us. But we won't back off from here," said Sukhwinder Singh, a protester at Singhu Border, one of the protesting sites on the outskirts of Delhi after several tents were up in flames there on Thursday afternoon.

"The fire broke out at around 12 pm. Two tents have been completely burnt to ashes. We believe that this was purposely done by miscreants from the Bharatiya Janata Party (BJP) to frighten us (farmers)," Singh mentioned.

Another farmer, Paramjeet Singh, said that the people inside the tent weren't injured. However, the farmers lost food supplies and other belongings.

​"When we didn't move even after losing over 350 of our brothers, these tricks by the government of sending their goons won't deviate us from our motive to get the black laws repealed," Paramjeet Singh said.

Since 26 November, 2020, thousands of farmers have blocked the roads leading to Delhi in neighbouring Haryana and Uttar Pradesh states. The move is meant to express anger against the three farm liberalisation laws that are being referred to as “historic” by Prime Minister Narendra Modi's government.

The laws in question are Farmers (Empowerment and Protection) Agreement of Price Assurance and Farm Services Act, 2020; Farmers Produce Trade and Commerce (Promotion and Facilitation) Act, 2020 and The Essential Commodities (Amendment) Act 2020.

According to the government, the laws allow farmers to sell their produce at places apart from their designated agricultural market. They're also aimed at allowing contract farming, under which producers can enter into supply agreements with private firms for remunerative and pre-decided prices.

Farmers believe that the new laws would pave the way for the dismantling of the minimum support price (MSP) system, leaving them at the mercy of big agribusiness.