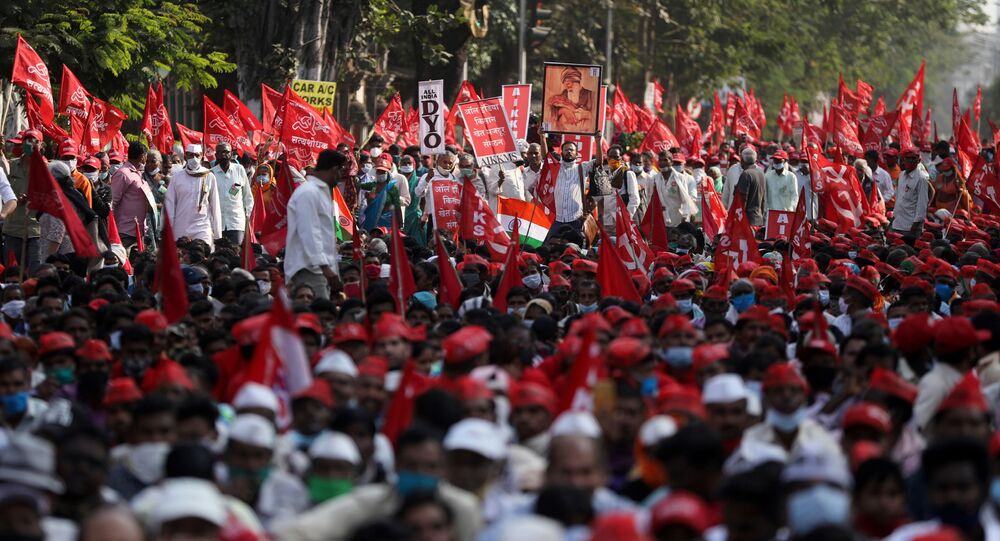 The Indian farmers have been protesting on the borders of Delhi since 26 November, demanding the scrapping of three new farm laws - the Farmers Produce Trade and Commerce, the Farmers Agreement on Price Assurance and Farm Services, and Amendment to the Essential Commodities Act 2020 - passed by the central government last September.

Thousands of farmers from 21 districts of India's Maharashtra state are participating in “Kisan Gantantra Parade” (farmers’ republic parade) on Monday.

It is actually a protest organised at Mumbai's Azad Maidan area to extend support to the farmers, mainly from Punjab and Haryana states, who have been protesting at Delhi's Singhu and Tikri borders for the past two months against the new farm laws.

On Tuesday, these farmers in Mumbai will also hoist the national flag at Azad Maidan in the morning, as the country witnesses a military parade performed annually to commemorate Republic Day in the nation's capital city, New Delhi.

All India Kisan Sabha's (AIKS) Maharashtra, a farmers’ front, said around 15,000 farmers had set out for the state capital Mumbai from Nashik city on Saturday and Sunday on foot or by minibus and other vehicles.

Thousands of Kisans marching from Nashik to Mumbai under the banner of All India Kisan Sabha crossing Kasara Ghat. Lakhs from across Maharashtra will take part in the Kisan-Mazdoor Parade on 26th January, 2021. #StandWithFarmers#KisanMazdoorParade pic.twitter.com/l2yyOEy6VG

These people have congregated after unions leading the protests in Delhi appealed to farmers across the country to ratchet up their protest between 23 and 26 January.

Sputnik talked to Dr Shaheryar Ansari of the Students Islamic Organisation of India (SIO), which is a part of the farmers’ body AIKS. The SIO has been instrumental in mobilising farmers and communication for the Mumbai protest.

"Farmers across the nation are united," said Dr Ansari. "Rumours were being spread that only north-Indian farmers are against the three farm laws and that the rest of the farmers have no complaint. That's not true.

"Not everyone can go to Delhi. Those who cannot be part of the protest aren't necessarily in favour of the farm laws," Ansari added.

According to Indian daily The Indian Express, around 100 organisations and civil society groups have joined hands under the banner of “Kisan Alliance Morcha” (a farmers’ front) supporting the ongoing protests in Delhi.

Dr. Ashok Dhawale, the national president of All India Kisan Sabha (AIKS), said this march is being held to support and expand the historic two-month-long farmers' struggle in Delhi.

Police in Mumbai have also put up strong security arrangements at the protest venue. Drones are being used to keep an eye on hooligans.

Sharad Pawar, one of the leaders of the State’s ruling alliance party and former federal Agricultural Minister, also joined the farmers’ protest on Monday at the Azad Maidan along with other state leaders.

Addressing the farmers, Pawar said: "The discussion over the farm laws began when I was the federal agriculture minister in 2003-04. We discussed them with the agriculture ministers of all the states. The deliberations remained inconclusive. The [present federally ruling] BJP government passed these laws without any debate and in a single day in Parliament."

Last week, the Narendra Modi government proposed 18 months of abeyance on implementing the new farm laws and setting up a joint committee to find an amicable solution to end the deadlock.

But farmer unions protesting on Delhi borders rejected the government proposal, as they want nothing else but the revocation of the new laws.

Why are Farmers Protesting Against the Farm Laws?

The farmers claim the new laws will in fact weaken the state procurement process at minimum support price (MSP), leading to deregulation of crop pricing. They also fear that new laws will put the farmers at the mercy of the big corporates.

The MSP is set by the federal government for select crops, based on recommendations it receives from the Commission for Agricultural Costs and Prices.