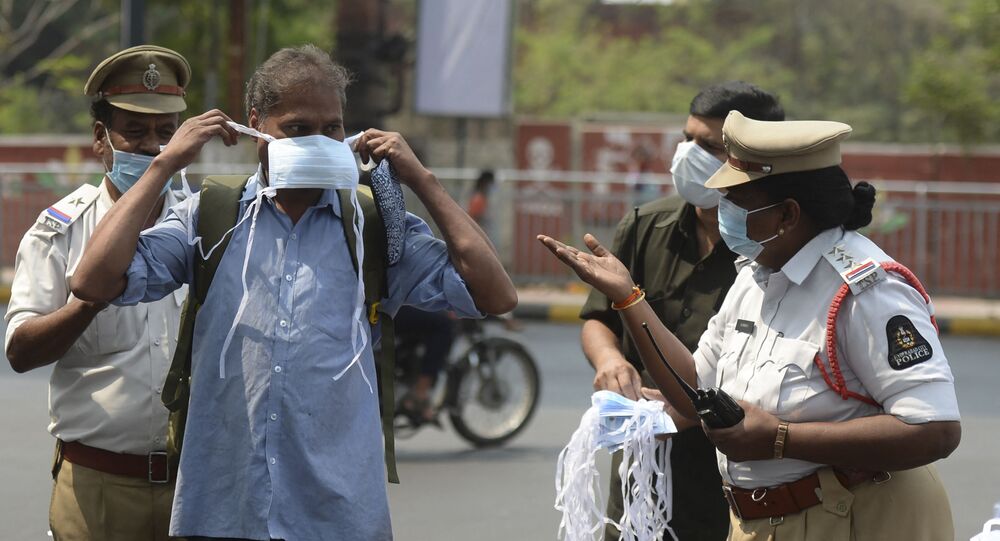 India has been witnessing record numbers of COVID cases every day since the middle of March as a result of which several states were forced to reintroduce strict guidelines and lockdown-like curbs to halt the spread of infection.

"COVID is a scam and there is no need to wear a mask," argued a man who was caught by police officials in Delhi for violating regulations. The man even tried to order the police to remove their masks and wander about without them.

Speaking to Sputnik, officials from Delhi Police claim that they have been offered hundreds of excuses: some of the people they stop claim that the pandemic is over whereas others just insist that they will not wear a mask. The police also frequently come across people who breach social distancing rules but are unable to come up with a good reason for doing so, and some have been found violating the night curfew and when asked why, have used such excuses as having been out to visit the hospital because of an emergency even though most have failed to provide any supporting documentation.

"Some of the violators told us that they can't breathe after wearing a mask and some tell us to arrest them since they can't pay the fine," a senior officer in Delhi Police said.

On Tuesday, the Delhi government imposed a night curfew (10pm to 5am local time), during which the police registered about 220 violations of COVID-19 guidelines, 534 preventive actions (under sections 65 DP Act, 107,151Cr.P.C) were taken and 842 fines were issued for not wearing a mask.

"Many of them told us that they did not know about the night curfew. Many people who were caught without a mask claimed they were going back home after seeing friends and family," the officer said.

He also complained that citizens don't understand how serious the virus is.

India's national capital is reporting fresh highs of COVID-19 cases every day and the vaccination roll-out is struggling to keep pace.

Delhi's Health Minister Satyendar Jain said that the night curfew has been imposed because parties and social gatherings were being held in various parts of the city.

However, Delhi Police found some violators even lied about being out and most claimed that they had been visiting the hospital for treatment. "When we asked them to show papers, they did not have anything and tickets were issues to them," one official said. Cops also found others who were just out for a night walk.

Recently, Chinmoy Biswal, spokesman for Delhi Police, said that officers will take strict action against the violators. "We are not doing this for us but for the safety of the people," he said.

According to Delhi Police data, up to 7 April, 545,393 tickets have been issued for mask violation, 3,504 for spitting and 38,789 for violating social distancing.

The Indian health ministry said that the country has witnessed 126,260 cases, a new record for a daily surge. Several states, including Maharashtra, Delhi and Punjab, have imposed strict measures to keep a check on rising cases.