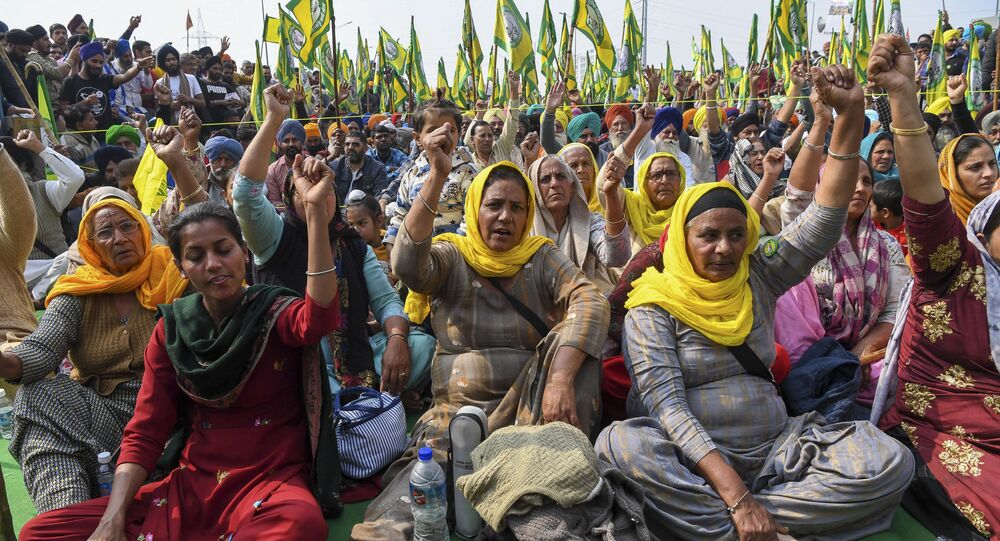 To mark International Women's Day, thousands of women from the states of Punjab, Haryana, and Uttar Pradesh have congregated at protest sites on Delhi's borders to join those who have been camping out on the outskirts of the Indian capital since November. They want the government to revoke new farm laws passed by the parliament last September.

As people across the world mark International Women's Day (8 March), tens of thousands of women in India are joining their farmer brothers on Delhi's borders.

Female farmers, students, and activists will be seen taking over key roles at the protest sites of Singhu, Tikri, and Ghazipur on Monday.

A joint front of farmers unions claimed nearly 40,000 women have joined them.

"Nearly 40,000 women have joined us to celebrate Women's Day, and these women will go back to their state later in the day", said Harinder Singh, a member of a protesting farmer union.

Today, these women will lead the farmers' protest, which has crossed the 100-day-mark, doing every major task including managing the stage, food and security or sharing tales of their struggles and the significance of their presence in the ongoing agitation.

Sputnik talked to some of the women who have converged on the area from neighbouring states to showcase their power and support the farmers' cause.

According to 50-year-old Kavitha Kuruganti, it's a fallacy that the protest is just about men.

"Most people think that farming is associated with men. But in India, almost 97.5 million women are farmers", she stated.

Kuruganti was the only female member in the delegation of farmers' representatives who held formal talks with the federal government.

"The most appropriate path for the government on these laws is to repeal them, as the passing of these laws doesn't assure that farmers will actually benefit", she said.

On International Women's Day people will get to hear female farmers and their concerns. All the speakers on the stage will be women. They will also conduct a small march at the Singhu border, she added.

Another activist, Navkiran Natt, a doctor by profession, said: "I come from an agrarian family and I believe the new laws are directly going to affect my family".

The 29-year-old Natt said her mother and father are also actively participating in the ongoing protests, and she's not going to return home until the laws are repealed.

Along with other activists, Natt is managing the protest at the Tikri border site. They have launched the Shaheed Bhagat Singh Library and their group has also started a four-page biweekly newspaper called the Trolley Times.

"The newspaper connects the farmers protesting at different sites and enables them to know the developments at the protest stages and with the government", Natt explained.

She also said they would publish one edition of Trolley Times dedicated to how women manage the protest on International Women's Day. The paper is being published in the Hindi and Punjabi languages.

The farmers are demanding a complete rollback of three new laws: the Farmers (Empowerment and Protection) Agreement of Price Assurance and Farm Services Act, 2020, Farmers Produce Trade and Commerce (Promotion and Facilitation) Act, 2020, and the Essential Commodities (Amendment) Act, 2020.

They have accused the government of abandoning its minimum price support (MSP) scheme, which protects farmers' incomes, and leaving them at the mercy of big corporations.

Despite several rounds of talks and clarifications, the protesting farmers fear these laws are set to negatively affect their livelihoods.