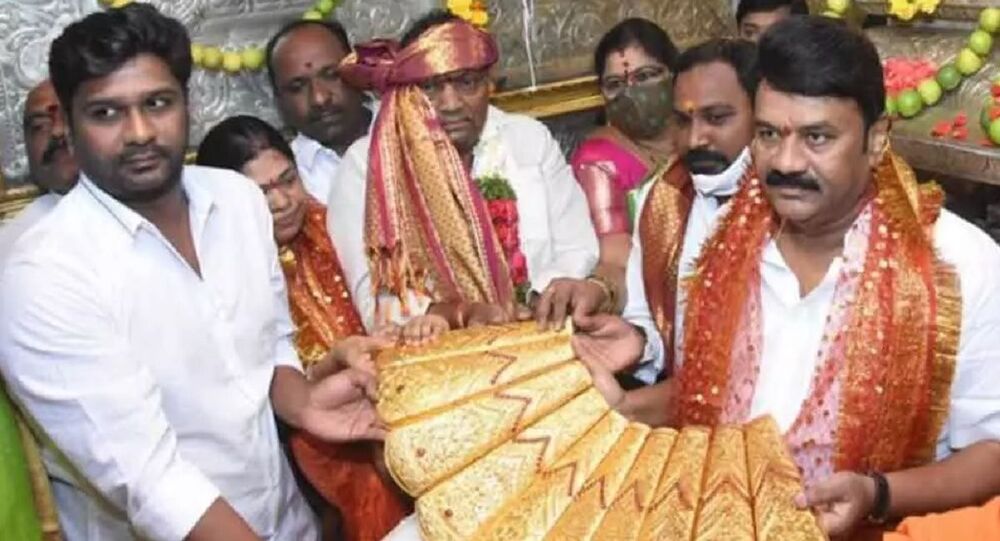 Kalvakuntla Chandrashekhar Rao, chief of India’s Telangana state and founder of his regional political party, Telangana Rashtra Samithi (TRS) turned 67 on Wednesday 17 February. Rao has been ill for some time and party workers sent greetings and wishes for his good health.

A show of opulence to mark the birthday of Kalvakuntla Chandrashekhar Rao, state chief of India’s Telangana state, has left many netizens fuming.

The whole affair came to light when Talasani Srinivas Yadav, the southern state's minister for animal husbandry, offered special prayers and presented the Goddess Yellamma at the Balkampet Yellamma Temple in Hyderabad city with a golden saree weighing 2.5kg.

The special saree, traditional dress for women, was prepared in Bengaluru city in the neighbouring state of Karnataka under the supervision of workers from the Telangana Rashtri Samithi party - founded by Rao - who were preparing for this big day.

“May Yellama [Mother of the Universe] bless KCR Garu with 100 more years,” wrote Talasani Sai Kiran, another party official who was also present at the occasion.

#happybirthdaykcr it was my unbelievable experience to present a 2.5kg gold saree to #balkampetyellamma on the auspicious day of the #greatest #kcr sir birthday ❤️❤️❤️. May yellamma bless #kcr garu 100 more years .⁦@trspartyonline⁩ ⁦@Balkampettemple⁩ pic.twitter.com/icIhnl9QAP

Such offerings are generally made in temples to the main deity so that the devotee may have his or her wishes granted.

The party workers have been in overdrive to express their loyalty and devotion to the state chief. A sapling plantation drive was also held to mark Rao’s birthday, wherein party workers planted 10 million saplings in a day.

The blatant show of wealth by the chief's cronies has been derided by many people on Twitter.

Although some netizens said it was “shameless spending”, others called it an example of “looting and democracy”.

Can't feed poor but donate to temples. Be more human, and this is to everybody who thinks that a hungry kid's life is less important than show off. Did they call NDTV to cover this news?

What could be more shameless than spending like this amidst a national COVID Pandemic-related crisis? 😡 https://t.co/mjuABZFMbo