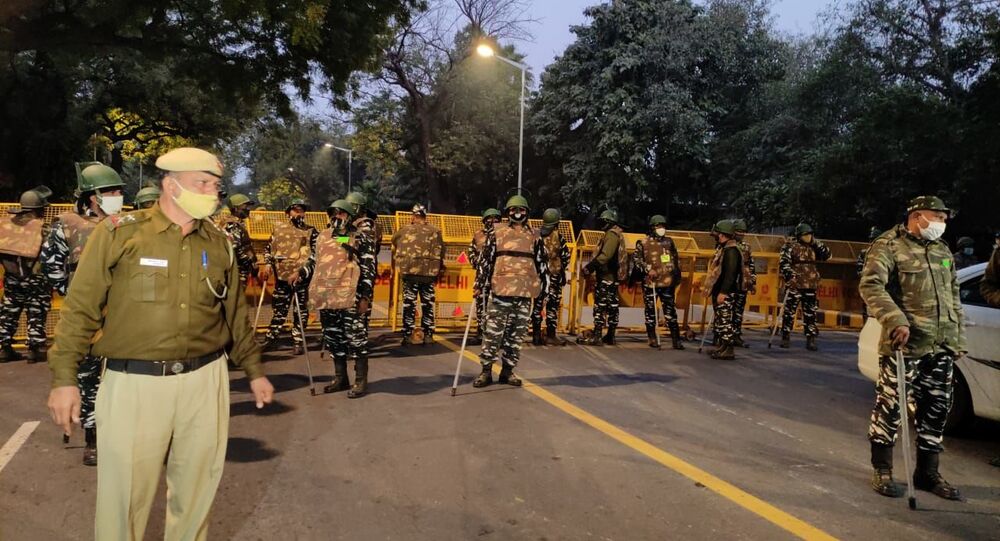 According to preliminary reports, the blast damaged several cars parked close to the diplomatic facility. It was reportedly planted in a flower pot on the pavement divider. At least three fire trucks and investigation teams were dispatched at the site of the incident.

An explosion rocked Delhi on Friday, hitting near the Israeli Embassy on Dr APJ Abdul Kalam Road, close to where Prime Minister Narendra Modi's residence is located. Both the Indian and Israeli security services told Sputnik that they consider the explosion to be an attempted terror attack.

© Sputnik
Site of the explosion near the Israeli Embassy in Delhi, India, on 29 January 2021.

A Delhi Fire Department official confirmed it was a low-power explosive device, noting that no one was injured by the explosion.

At the same time, several cars parked near the embassy were damaged by the explosion.

© Sputnik
A car damaged by the explosion near the Israeli Embassy in New Delhi, India, on 29 January 2021.

A video allegedly depicting the site of the incident has since been shared on Twitter.

Reaction of the Indian Authorities

Following the blast, Indian police tightened security measures in all airports, important installations, and government buildings in Delhi and Mumbai.

© Photo : Sputnik
Footage not far from the scene of the explosion

India’s foreign minister said he has discussed the incident with his Israeli counterpart.

Spoke just now to Israeli FM @Gabi_Ashkenazi about the explosion outside the Israeli Embassy. We take this very seriously. Assured him of the fullest protection for the Embassy and Israeli diplomats. Matter is under investigation and no effort will be spared to find the culprits.

Meanwhile, Deputy Chief of Mission of Israel Embassy, Rony Yedidia, told Sputnik on Friday, shortly after a blast happened near the embassy that everyone is fine and safe.

The blast happened when the annual national "Beating the Retreat" ceremony was being held in the nearby Vijay Chowk area, with President Ram Nath Kovind, Prime Minister Narendra Modi, and other top officials and diplomats present.

The last time such an attack occurred was in Delhi's Lutyen's Zone almost 9 years ago, in February 2012, when a sticky bomb was placed on the car of an Israeli diplomat, Tal Yehoshua Koren, who was wounded by the blast.