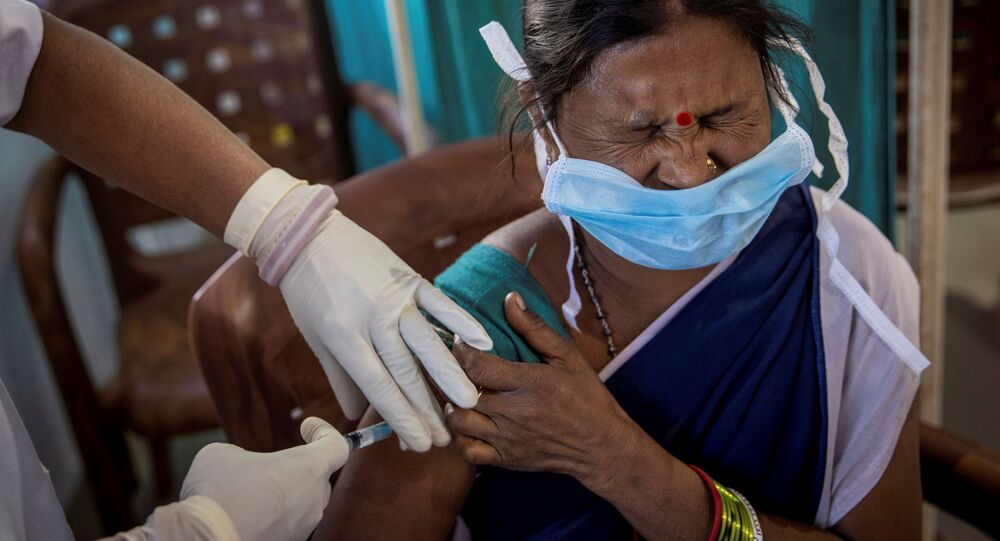 India, a country with more than 1.3 billion people, kicked off the world's largest COVID vaccination drive on Saturday. The government aims to vaccinate 30 million frontline staff, including health workers, during the first phase of this drive.

An instinct for hesitating and a lack of awareness is behind the low turnout of frontline workers to take part in the vaccination drive, say a number of medical experts in the country.

According to government data, so far India has jabbed more than 381,000 frontline workers in the world's largest Covid vaccination drive which kicked off on Saturday.

© REUTERS / ANUSHREE FADNAVIS
Healthcare workers and hospital stand at the entrance of a COVID-19 vaccination centre, at the Max hospital amid the outbreak of the coronavirus disease (COVID-19) in New Delhi, India January 16, 2021

However, officials have revealed that the turnout was only around 50 percent of what was expected.

Speaking to Sputnik, a number of medical experts said it is basic human nature to let others take a shot first and see what happens to them.

"Isn't that what we all do, when we are hesitant about something? These are early days and we shouldn't be worried. I believe people’s apprehensions can be countered with effective communication, said Dr Naveen Thacker, the Executive Director, International Paediatric Association.

He added that the general public still have doubts about the efficacy of the vaccines being injected into them.

"I have noticed that people are worried basically about the Covaxin (Bharat Biotech) and questioning how it was developed in no time. But they should trust the medical team which has worked tirelessly for them to get the vaccine to the market," Thacker said.

He also said many have questions such as from those who have already recovered from Covid wanting to know whether they should take the jab. The government needs to consider such general concerns.

© REUTERS / FRANCIS MASCARENHAS
Healthcare workers stand in a line as they wait to receive the COVID-19 vaccine during the coronavirus disease (COVID-19) vaccination campaign, at a medical centre in Mumbai, India, January 16, 2021

At least 580 people have reported reactions such as pain, mild swelling, mild fever or nausea after being vaccinated, with only a few requiring hospitalisation.

Dr Lalit Kant, former head of epidemiology at the Indian Council of Medical Research, said these cases 'are adding onto the minds of those health workers who are yet to be jabbed.

Stating that the government should have carried out several awareness campaigns at least a couple of weeks before the drive began, Dr Kant said: “People should have been told what would happen when they received the jab and then this would not have occurred.

“Now with cases of adverse effects reported, the government should monitor recipients minutely and give confidence to the affected as well."

He also said that political leaders and local influential people should be vaccinated as well, to inspire a sense of confidence among others.

Earlier this month, the Drug Controller General of India had approved two vaccines – Oxford-AstraZeneca’s Covishield and Bharat Biotech’s Covaxin, which has been cleared for restricted use in emergency situations.

According to government data, India recorded around 14,000 new cases in the past 24 hours taking the tally to above 10.05 million and 145 new fatalities have been recorded, taking the death toll to 152,419. However, the number of recovered patients has exceeded 10.02 million in the country.

'It is the Beginning of the End': Director of India’s Premiere Medical Institute on Mass Vaccination