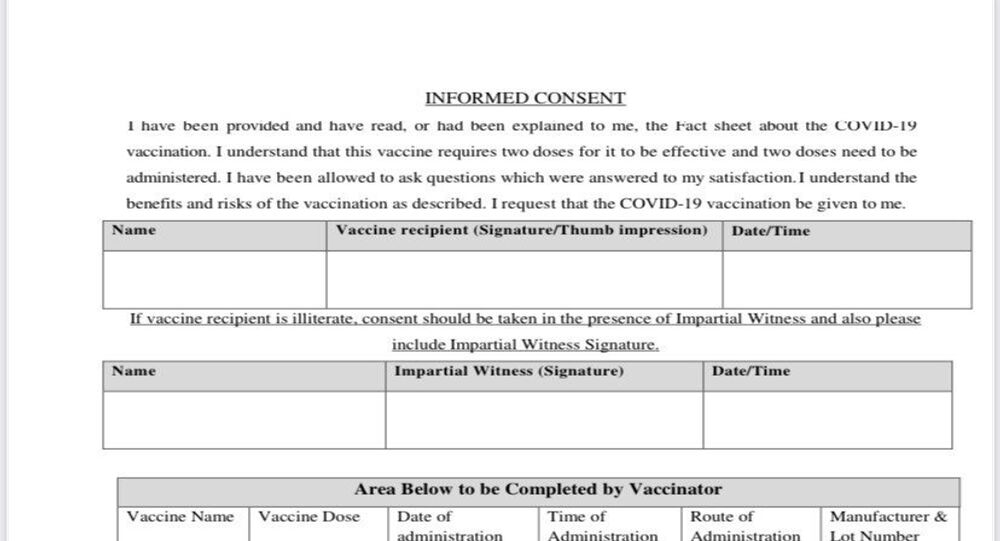 Earlier this month, India approved two vaccines – Oxford-AstraZeneca’s Covishield and Bharat Biotech’s Covaxin – but the latter has been only been cleared for restricted use in emergency situations.

With India kicking off its vaccination drive on Saturday, health workers receiving Bharat Biotech's Covaxin are being made to sign consents forms which assure they'll get compensation if they suffer any adverse side effects.

Speaking to Sputnik, a senior Health Ministry official revealed that Covaxin recipients are being made to sign the documents because the vaccine's use has only been approved by the government for "clinical trial mode."

Those receiving the jab are not able to choose if they're injected with the Indian-made Covaxin or Covishield, manufactured by Pune-based Serum Institute of India and developed by Oxford, however, only those receiving Covaxin need to sign the form.

A consent form obtained by Sputnik mentions that "The COVID-19 Vaccine, Covaxin is being offered to you as part of a vaccination drive by the Ministry of Health and Family Welfare under restricted use in emergency situation."

Bharat Biotech's Covaxin has been granted government approval for restricted use in emergency situations.

"In phase 1 and phase 2 clinical trials, Covaxin has demonstrated the ability to produce antibodies against COVID-19. However, the clinical efficacy of COVAXIN is yet to be established and it is still being studied in phase 3 clinical trial. Hence, it is important to appreciate that receiving the vaccine does not mean that other precautions related to COVID-19 have no need to be followed," the form reads.

The authorities have asked the recipients of the jab to inform them if they experience any side effects. If they do, the government will provide them with the necessary healthcare.

"The compensation for serious adverse event will be paid by sponsor (BBIL) if the SAE is proven to be causally related to the vaccine," the form states.

Speaking to Sputnik, Vimal Kumar, a worker at a government hospital, said that he signed the form and has full trust in the Indian vaccine.

"People are questioning the government but we [health workers] have full faith in them. For months, experts have been working in order to get us the vaccine. It's out now. I would urge everyone to get vaccinated as their turn come," he said.

Ever since the Drug Controller General of India gave clearance to Bharat Biotech's Covaxin, they have faced criticism from opposition parties and medical experts as it is has not yet cleared final-stage trials.

Prime Minister Narendra Modi is rolling out the first phase of the country's vaccine programme, which will see nearly 30 million Indian healthcare workers being inoculated.