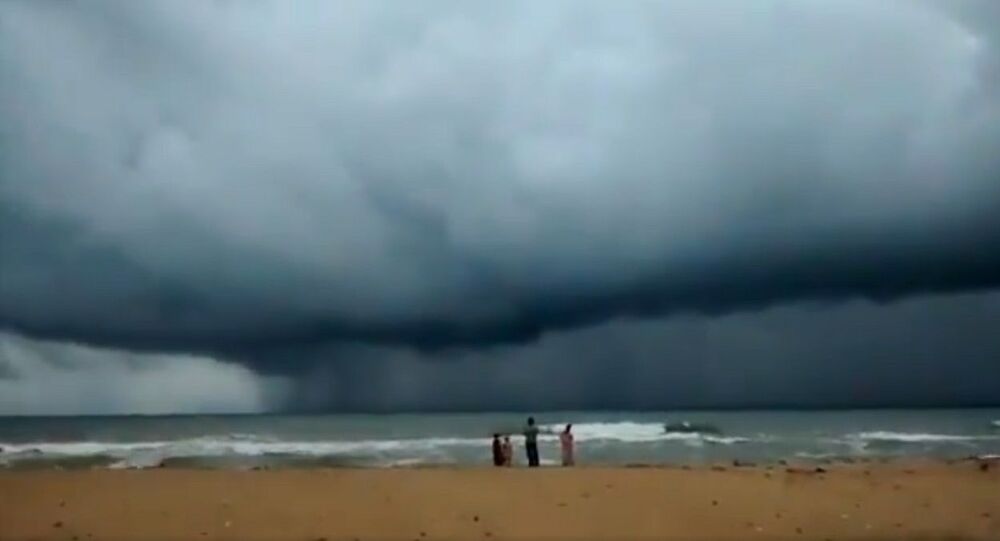 It is almost as though the ominous year 2020 – which has brought forest fires, earthquakes, UFOs, and a pandemic to the world – has more shockers left in store before it ends. In India, the southern coastal state of Tamil Nadu and its neighbouring territories are battling heavy rains, while fearing something greater.

A depression has formed in the Bay of Bengal stretching from Kolkata to Tamil Nadu along the eastern coast of the country, and it is gradually intensifying into a cyclone that has been named “Nivar”. The storm is expected to make landfall over some southern Indian cities on Wednesday, 25 November.

© REUTERS / Anuwar Hazarika
Bursting Clouds, Lightning & Floods Wreak Havoc on Indian States Leading to Destruction, Deaths
Dark imposing clouds have been hovering over Tamil Nadu state and its capital city Chennai on Tuesday, giving residents a glimpse of the approaching cyclone Nivar. At a time when most of India has already stepped into the winter, Tamil Nadu and its neighbouring localities are struggling with heavy rains.

Residents of Chennai and other cities in Tamil Nadu have shared glimpses of the stormy rains and unsettling dark clouds blanketing the lands and skies in the region.

Dear CCMs, this us just starting. It is gonna get worse n worse by evening. Even if we venture out we all will get stuck In our exam centre and wont be able to return back. Pls respond to us@atulguptagst @AniketTalati @kdhiraj123 @theicai#NivarCyclone#ICAI_BE_TRANSPARENT pic.twitter.com/EY9cnh9BzC

​Prime Minister Narendra Modi on Tuesday also spoke to the state chiefs of Tamil Nadu and the nearby union territory of Puducherry ahead of the impending cyclone.

Spoke to Tamil Nadu CM Shri @EPSTamilNadu and Puducherry CM Shri @VNarayanasami regarding the situation in the wake of Cyclone Nivar. Assured all possible support from the Centre. I pray for the safety and well-being of those living in the affected areas.

​Meanwhile, the India Meteorological Department (IMD) has issued a yellow alert for the districts of Tamil Nadu and the bordering Karnataka state.

© Sputnik / FRANCIS MASCARENHAS
Cyclone Nisarga Set to Make Landfall in Maharashtra, Gujarat
Between 25 and 26 November, the IMD has projected severe rains in parts of southern India, including in Bengaluru city – the capital of Karnataka state, which is likely to witness rainfall of up to 115.5 mm.

Earlier this year, Cyclone Amphan hit the eastern coastal states of West Bengal and Odisha, claiming around 100 lives and affecting over 10 million people. It is estimated that around $14 billion in damages were caused by the storm.

In June, a deep depression over the Arabian Sea intensified into Cyclone Nisarga that crossed over cities in Maharashtra and Gujarat in western India, causing major destruction.