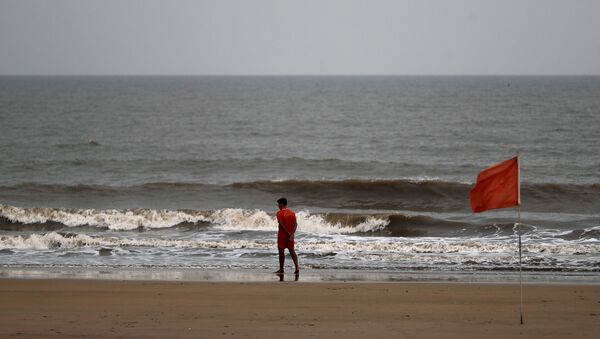 © Sputnik / FRANCIS MASCARENHAS
Subscribe
New Delhi (Sputnik): The western Indian states of Maharashtra and Gujarat have been the worst COVID-19 affected, with 70,013 and 17,200 cases respectively. As authorities are trying to grapple with the escalating situation amid a relaxation of the lockdown, Cyclone Nisarga has come knocking on the shores.

The Indian Meteorological Department has revealed that a deep depression over the Arabian Sea intensified into a cyclonic storm on Tuesday and the same Cyclone Nisarga will make landfall in Maharashtra and Gujarat in the afternoon on Wednesday, with a wind speed of up to 110 km/h. As many as 40 National Disaster Response Force teams have been deployed in both the states.

​Gujarat has shifted around 80,000 people from low-lying areas in the coastal districts of Bharuch, Surat, Valsad, and Navsari. The national and state disaster response forces have been deployed to shift/evacuate more people. The movement of people on beaches – which were to open from Wednesday after lockdown relaxations – in Mumbai has been restricted.

​India's financial capital Mumbai, which will witness its first-ever cyclone in recent recorded history, has been put on alert as heavy showers hit the city.

​Rescue and relief teams from the Army and Navy, along with ships and aircraft, have been put on standby, while vessels of the Coast Guard are rescuing fishermen at sea.

The districts along the western coast likely to bear the worst impact are Raigad, Mumbai, Thane, and Palghar in Maharashtra, along with Valsad, Navsari, Surat, Bhavnagar, and Bharuch districts of Gujarat and Daman, Dadra, and Nagar Haveli.

Earlier, in May, Cyclone Amphan hit the eastern coastal states of West Bengal and Odisha, claiming around 100 lives and affecting over 10 million people. It is estimated that around $14 billion in damages were caused by the storm.