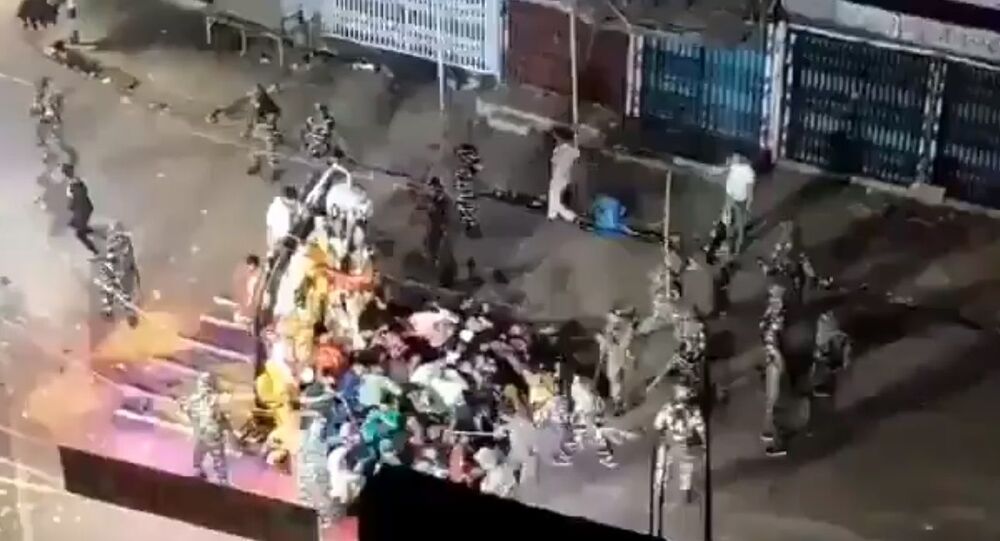 Durga Puja was celebrated across the Indian subcontinent to revere and pay homage to Goddess Durga – the goddess of power. This year it was celebrated from 22-26 October. Decorated idols of Goddess Durga are installed and worshipped in specially erected pavilions and at the end of the festival, the idols are immersed in water.

In India's poorest state Bihar, which is due to have elections soon, one person was killed and dozens more, mostly policemen, were injured on Monday night when an idol immersion procession of the Hindu Goddess Durga was disrupted by the authorities.

The incident occurred in Munger district; police had arrived to disband the unauthorised gathering and were pelted with rocks, prompting them to retaliate.

The procession was being carried out at the end of days of Durga Puja festivities.

Traditionally, the procession is taken out on Vijayadashami day, Monday the 26th of October, but this year the local administration had sought to delay the procession over coronavirus concerns.

The organisers of the Puja, however, carried out the procession ahead of time and without official permission late Monday night, inviting police objection.

Locals claimed the police used force without any provocation. However, police claimed that participants of the procession had pelted them with stones.

“The mob pelted stones and opened fire on police, which led to the death of one person and injured 27 people, including 20 policemen,” Munger’s superintendent of police Lipi Singh told media.

Just like the Palghar one, this video from the famous Munger Durga Visarjan is poetic representation of pathetic state of Hindus in India under the Secular Constitutional setup with a bureaucracy trained under a communist curriculum. pic.twitter.com/d3WSY1fd44

​There have been angry reactions on social media against the district police and Bihar government headed by Chief Nitish Kumar.

Dear @NitishKumar, this is what your administration has achieved.
Your Political Career is finished and deservedly so!!! Shame on You and Shame on Bihar BJP for allowing this carnage. #Munger pic.twitter.com/AVWkjakqMM

Hindu Massacre in BIHAR!
Munger Police lynched Hindus in front of Durga idol as the armless devotees piled over each other!
Monsters of munger police shot them in cold blood
All this undr SP Lipi Singh who like general Dyer got hindus massacred in jalian wala bagh!@NitishKumar pic.twitter.com/hqvzaRfVCo

At #Munger, Bihar, the district administration & police beat up devotees immersing the Durga idol, then fired on the resulting protests, killing one & injuring 27. Such brutal repression is the hallmark of the Nitish-Modi regime in Bihar

Frankly, there appears to be some calculation in how it was done: waiting for the procession to enter a secluded lane. There aren't that many people there either, so they seem to have waited till numbers dropped. The rooftop mobile recording was an unexpected spoiler. #Munger https://t.co/pF0hfNtDXD

​This year, Durga Puja festivities were otherwise a low-key affair, due to the pandemic and state-imposed restrictions on public gatherings.

The first phase of the three-phased election is scheduled for Wednesday in 71 constituencies.