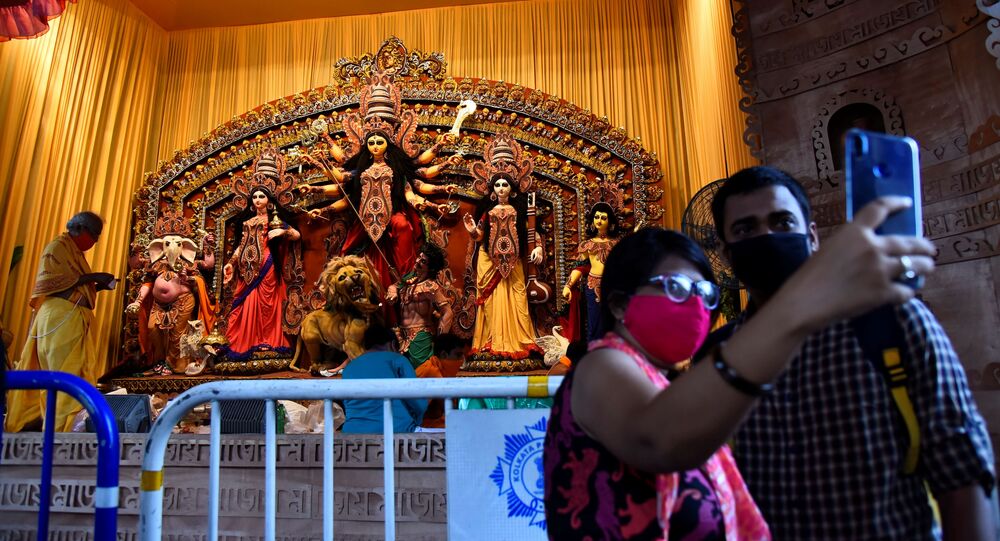 During India's Navaratri festival, "pandals" are set up for spectators to witness the representation of the final battle between Goddess Durga and the evil Mahishasura. Immense creativity is employed in the depiction of the act that is traditionally represented in the form of idols of the fierce Goddess slaying the demon with a trident.

Organisers of a Durga Puja pandal in West Bengal's Murshidabad district have given a demon the face of Chinese President Xi Jinping: a huge idol shows Xi as the slaughtered demon with his blood-oozing severed head on the floor, while a lion feasts on his body.

As part of the traditional celebrations, tens of thousands of make-shift tents called "pandals" are set up in cities across India, depicting stills from the mythological battle where Goddess Durga mounted on a lion, slayed the demon king Mahishasura in the final culmination of the nine-day battle between good and evil.

In a #DurgaPujo pandal in Bengal, Durga's lion has bitten off Chinese premier Xi's head. From @indraroy's Facebook. pic.twitter.com/VUWgLRuM4A

The depiction of Xi Jinping as a demon comes against the backdrop of simmering border tensions between India and China that erupted in April of this year over infrastructure development in the forward areas of Ladakh. ​

Indians have been responding hilariously to the picture of the Murshidabad pandal that has since gone viral on social media.

Bangali's Durga Puja creativity at its best. Seen on the internet via @PriyamGhose, starring Xi Jinping as Mahishasura. Though I doubt, he is as fit as shown here. pic.twitter.com/oJ6YWL94QX

​Congress leader Shashi Tharoor also shared the picture of this particular pandal saying the days of Chinese supremacy seem to be coming to an end.

And I thought Bengalis are known for their diplomacy! Clearly the days of “China-er Chairman amader Chairman” are officially over...#DurgaPuja2020 pic.twitter.com/kJLHannkBi