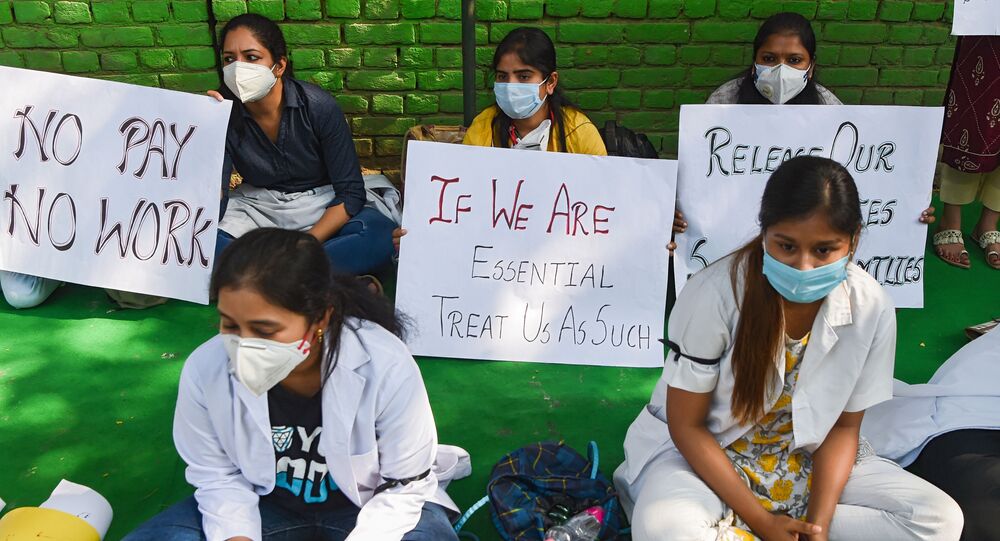 During the pandemic, medics from around the world have become real heroes, working 24/7 to save as many lives as they can. In India, however, some doctors have found themselves in a difficult financial situation, despite working extra hours and exposing themselves to the virus on a daily basis.

Around 100 doctors and paramedics have gathered in the heart of the Indian capital of Delhi – Jantar Mantar – to raise a collective voice demanding for their salaries to be paid on time as the coronavirus crisis rages on.

The doctors are treating patients at three different municipality-run hospitals – Hindu Rao, Kasturba Gandhi, and Rajan Babu – but the last time they received their paychecks was back in June.

Donning masks and carrying strongly-worded slogans against Delhi’s municipal corporation system, the doctors have raised various banners to demand that their rights be respected:

It's been 18 days since doctors from these hospitals started protesting for their salaries to be paid on time.

© REUTERS / DANISH SIDDIQUI
India's Top Court Orders Gov't to Ensure Payment of Salaries to Doctors Fighting Pandemic
Last week, some doctors also lit candles as a mark of protest against the non-payment of their salaries – which, they told reporters, violated their human rights.

No statement or reaction from the authorities of the aforementioned hospitals in Delhi about the protesting doctors has been issued as of now.

Earlier, in June, the Supreme Court of India ordered the federal government to ensure that frontline health staff treating COVID-19 patients get their pending salaries. The court asked the Narendra Modi government to direct the state authorities to also comply with the orders.