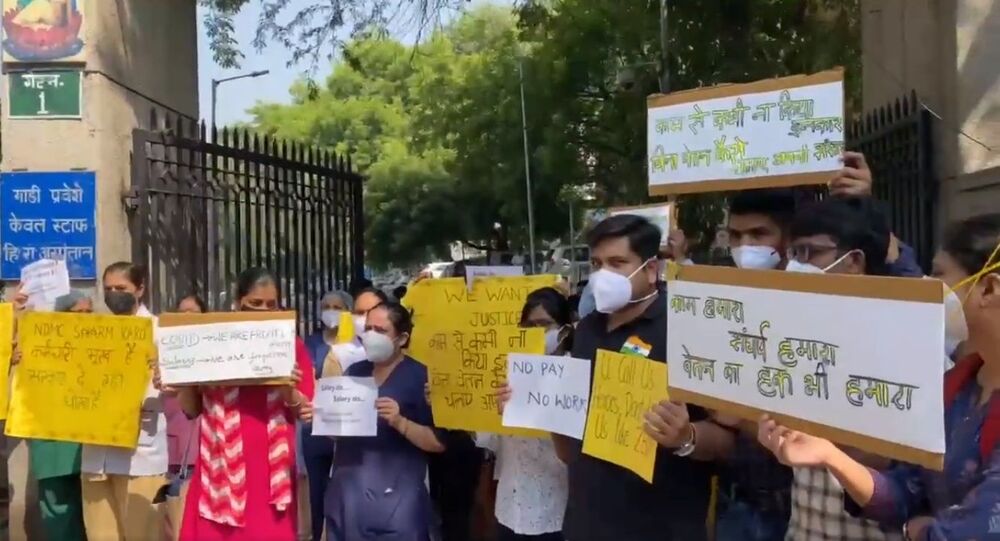 New Delhi (Sputnik): The healthcare staff at Delhi's various government hospitals have staged similar protests in the past over non-payment of salaries and excessive working hours. India continues to report over 60,000 cases daily, with the total number of cases reaching almost 6.7 million.

Doctors and other medical staff on COVID-19 duty at Delhi's Hindu Rao hospital held a protest on Wednesday, over the non-payment of salaries for the past four months.

The healthcare staff gathered outside the hospital to protest against North Delhi's civic administration by chanting slogans and holding placards that read "No Pay No Work".

​The doctors told the media that they would also take the protest online by regularly posting pictures with such texts as "Doctors on COVID Duty, Unpaid Day".

The hospital in question falls under the jurisdiction of the civic administration currently run by the Bharatiya Janata Party (BJP). The city is governed by the Aam Aadmi Party (AAP).

Doctors at the civic administration-run hospital had previously staged a protest claiming that their salaries have been delayed and wrote to Prime Minister Narendra Modi about the same.

The Delhi High Court then took note of a public interest legislation against the delay in salary payment at two Delhi hospitals - the second hospital was Kasturba Hospital.

Notices were also issued to the federal government, Delhi government, and the civic administration regarding the matter.

Later, the federal government told the Supreme Court of India that non-payment of salaries to the healthcare staff would now be an offence under the Disaster Management Act and the Indian Penal Code.

The government also issued the guidelines to imply the same.