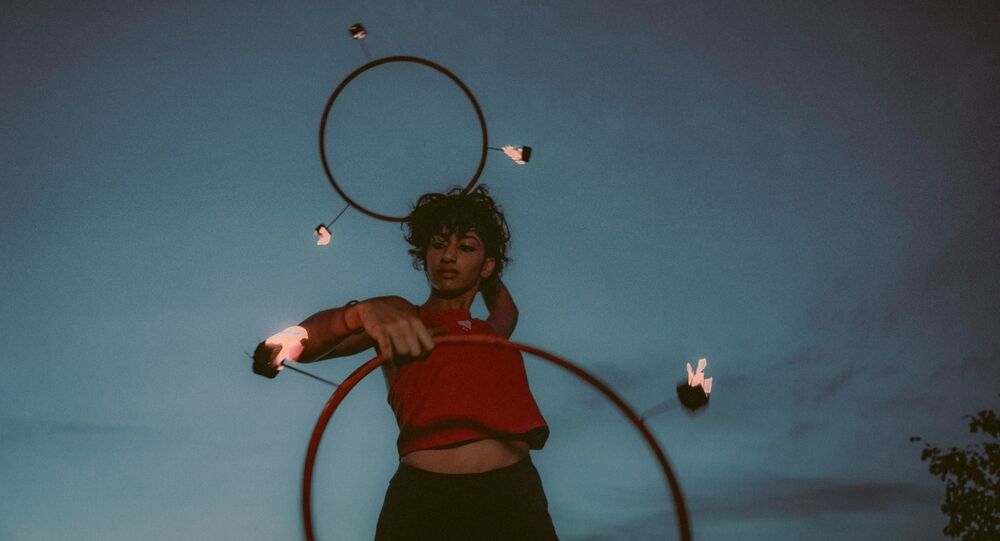 Hula hoops, which became a worldwide craze in the 1950s, made a comeback in the West sometime during the first decade of the 21st century as a form of fitness, healing, and meditation for kids and adults alike.

24-year-old Eshna Kutty from New Delhi has become an overnight sensation after her hula hoop dance video wearing a saree and sneakers crossed over a million views online. It is her unconventional attire that made the video a sensation, as the saree, a nine-yard piece of cloth wrapped rather tightly covering a woman’s entire body, is often not perceived as suitable for sports or physical activities.

Hence, Eshna’s video sparked the #sareeflow trend, with many other women re-enacting her moves in different styles. Eshna spoke to Sputnik about the sudden limelight that the hula hoop has garnered in India and its overall impact on the Indian millennial.

Can one really flex to a song like Genda Phool which is all heart tho? This post is primarily to share with you why I put out #sareeflow as a hashtag. It had been on my mind for months, and the intention was not to create the most sensual saree videos, but to feel so comfortable and happy wearing it without the pressure of being a delicate lady. That aside, I wanted to also spotlight Indian hoopers because we're so few in number but growing so fast. Theres so much diversity in our cultures and even in our sarees that I hoped this trend would add a very unique twist to a global art form. Or visa versa- that you'd want to get yourself a hoop because you secretly want to dress up to goof around. Either case, I think it's fantastic that you're doing it anyway and sharing it ❤️ . . . Wearing @pumaindia + mother's saree obv✨ . . #hoopersofinstagram #hooplife #hoopdance #hoop #hoopersofig #hooplove #flowarts #hoopflow #hulahoop #hulahooping #infinitecirclescommunity #girlswhohoop #hooper #hooping

Sputnik: How has life changed after becoming an overnight sensation with your #sareeflow hula hoop dance act?

Eshna Kutty: I’m touched by the responses and it has given me a quantum jump as a hula hoop artiste. I used to have about 30,000 followers on Instagram and within a few days, it has now reached 95,000. The general view rate on my videos used to be 20,000 but now it’s over a million. My social media is bombarded with messages but I’m just keeping myself off from too much social media and not let it get to my head. After watching my video, many people are now showing interest in learning the hula hoop.

Sputnik: Why did you decide to do the act in a saree?

Eshna Kutty: It was a quirky idea to do something different and I also wanted to show people that you can still move freely and groove in a saree. Initially, I wanted to call desi-flow and make other different acts in it, but it shot to fame as #sareeflow. It’s kind of cool and when so many other Indian women picked it up, I was awestruck. It feels good that my act inspired so many people to try out the same in their style.

Kaafi sati savitri no? #FlauntThatSportsBra Y'all asked for it, so here's a saree practice from months ago that never went online cuz jusssst. But a Reel happened instead! . . Wearin' them @pumaindia shoes, being that 'Propah Lady'. Song- Desi girl chant by @kumarisuraj . . #sareeflow #hoopersofig #desigirlchant #flauntthatsportsbra

Sputnik: When did you decide that you want to pursue a career as a hula hoop dancer?

Eshna Kutty: I started hula hooping 10 years ago and there wasn’t any teacher. So, I learnt it from YouTube and self-motivated myself to do it. I started to teach people five years back and build a community of people hooping. Hooping as a profession never took full priority, as I was studying, but in the last one year, I've dedicated myself to this wholeheartedly and got to explore other movement forms as well.

Sputnik: Is the hula hoop just seen as a general recreational activity or is it recognised as an art form in India and abroad?

Eshna Kutty: In India, the hula hoop is identified as an act of circus or a child's toy to play with. Though they refer to it as a circus in not a nice way, I think being a circus artiste is a very skilful career. This perception comes from the lack of awareness of what it really is and how therapeutic it is.

Abroad, there is a hooping community, but it isn't as popular as other dance forms, such as hip hop. That’s because hooping is only two decades old. Hooping is basically an amalgamation of acts that comes under the flow art. It’s actually a Native American folk-dance form and only men used to do it back then. Women were not allowed to do it at all. But now women do it and only a few men participate. But I’m teaching a few men as well who thoroughly enjoy it.

Sputnik: What is your next plan?

Eshna Kutty: With this recognition, I plan to make the hula hoop culture in India a big thing by launching my own brand – Hoop Flo – soon.  I’ve been introducing a course to teach different styles of hooping. To mark World Hoop Day on 3 October, there are many cute things planned.

What's in a saree if you can't play around with the pallu? But hello my hoopers, the more you tag me in your #sareeflow, the more you inspire me to throw some back at you (Even if it means spending more time in your mum's cupboard)! Okay but while you're at it- pls shoot BTS stuff because THE WORLD NEEDS MORE BLOOPERS. HUMANS ARE AFTERALL BLOOPERS ON THIS PLANET. I promise to do the same- (watch till the end.) Kay, love y'all! . . Song- Uyire by @sidsriram 💛 @neeraj_madhav -Only just saw the video! Whatte cutie! ✨ . . . #hooperblooper #hoopersofinstagram #hooplife #hoopdance #hoop #hoopersofig #hooplove #flowarts #hoopflow #hulahoop #hulahooping #girlswhohoop #hooping

When Size Matters: Man Hula Hoops Like a Boss