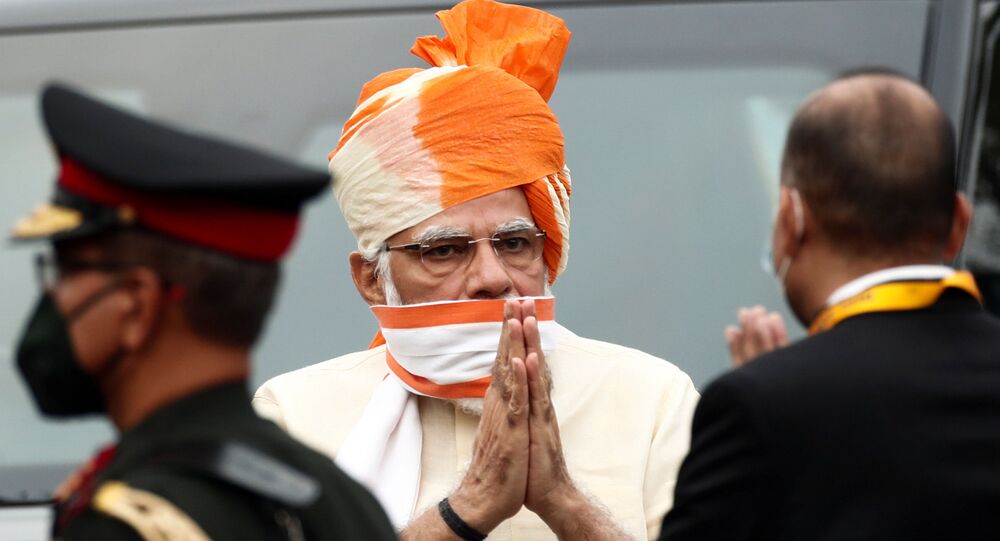 New Delhi (Sputnik): Adding to the woes of Prime Minister Narendra Modi's government, India's economy contracted by 23.9 per cent in April-June, registering biggest fall in output in 40 years. The federal government is now being targeted for its "inefficient" handling of the economy, especially amid the pandemic.

The former head of India's Congress Party, Rahul Gandhi, on Wednesday slammed Indian Prime Minister's "failures" by compiling a list of 'Modi-Made disasters', which included a historic reduction in Gross Domestic Product (GDP), the highest unemployment in 45 years and external aggression on the nation's borders.

India is reeling under Modi-made disasters:

​The Congress Party leader has been vocal on social media condemning the nation's government on a variety of issues. Stating that India is reeling under Modi-made disasters, Rahul also highlighted that nearly 20 million jobs have been lost and that India has recorded the highest surge in daily COVID-19 cases and deaths; he also criticised the Goods and Services Tax (indirect tax regime).

Several other leaders of the party have also raised similar concerns over the issue. India's former finance minister P. Chidambaram, also a member of the Congress Party, took a dig at Finance Minister Niramala Sitharaman's "act of god" remark over the slump in the economy, saying “Do not blame God for a man-made disaster.”

The Indian economy was already in a precarious state before the pandemic hit the country, due to several factors, including the US-China trade war and demonetisation. The GDP growth of the country had declined to 3.1 percent (annualised) in January-March period this year from 8 percent in 2018.

The 23.9 percent contraction in April - June, when the lockdown was in effect, has come as a major blow for the people and the government, as it means that Indian has technically entered a recession.

After the numbers were revealed, chief economic advisor to the federal government KV Subramanian said that India's GDP figures are along expected lines. It was highlighted that had it not been for increased government spending, the number could have been worse.