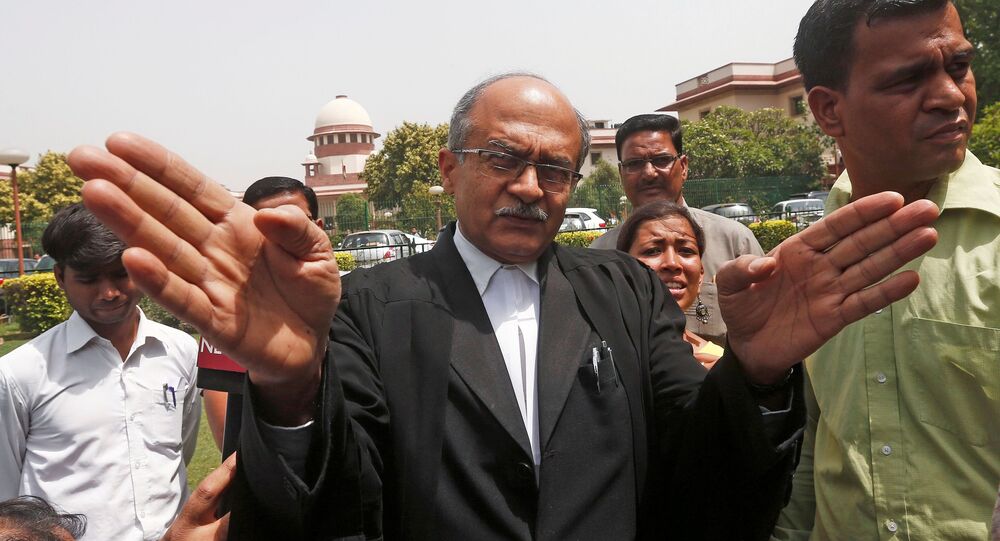 New Delhi (Sputnik): On 14 August, India’s top court found Senior Advocate Prashant Bhushan guilty of criminal contempt for attempting “to scandalise the entire institution”. The lawyer had refused to apologise for tweets which attacked the behavior of top judges during lockdown.

The Supreme Court of India on Monday slapped a symbolic fine of INR 1 on Senior Advocate Prashant Bhushan who has been convicted for contempt of court over two tweets he made.

The court asked Bhushan to deposit the fine by 15 September and, in case of failure to comply, he would face a three-month jail sentence and suspension from practice for three years.

The lawyer had claimed that the country’s top judge was riding a motorcycle while the court’s work was curtailed due to the COVID-19 pandemic. He also criticised former Chief Justices.

The top court has given Bhushan until Monday to tender an unconditional apology. The lawyer, however, has refused to do so and told the court that he would “cheerfully submit to any penalty,” which he said “represented my bona fide beliefs, the expression of which must be permissible in any democracy”.

Earlier, a top lawyer for the federal government Attorney General K.K. Venugopal had urged the court not to punish Bhushan. But the Bench refused to accept his plea, unless Bhushan reconsidered his earlier stance of not apologising for his tweets.

The Supreme Court in its judgement on Monday said, "We have considered the sane advise given by the Attorney General, and have concluded that the conduct of present contemnor also needs to be taken into consideration.”

Bhushan’s contempt of court had become a bar versus bench issue, with India’s top lawyers rallying behind him.

Former chief legal advisor to the federal government Soli Sorabjee said the apex court had overreacted by taking action against Bhushan for his tweets.