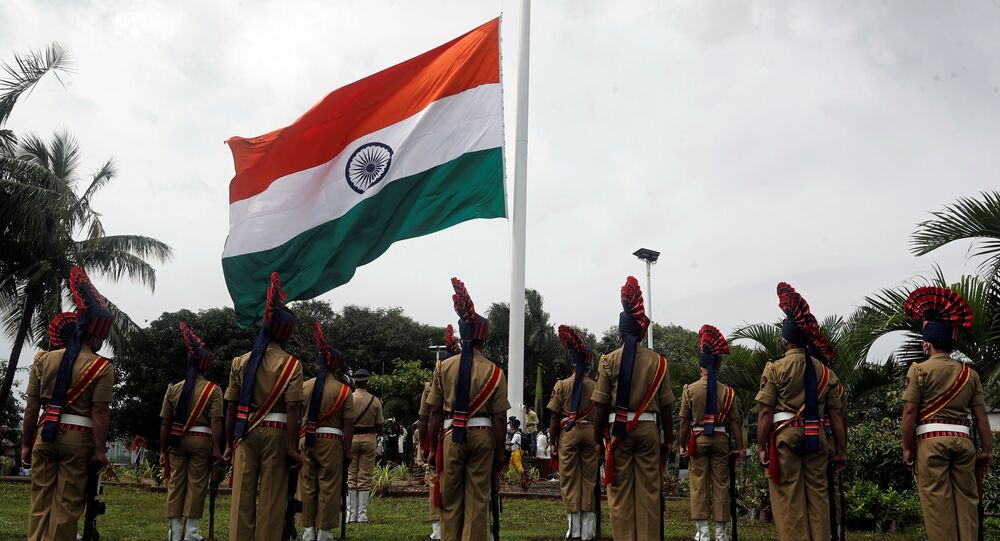 India, which obtained its freedom from British rule on 15 August 1947, is celebrating its Independence Day today. Even though the celebrations remained muted this year due to social distancing norms amid the ongoing COVID-19 pandemic, Indians took to social media to mark the occasion.

The Independence day hashtags started trending early on Saturday, almost coinciding with Prime Minister Narendra Modi's address to the nation to mark the occasion. Indians took to Twitter to spreading messages of peace and harmony and wish each other well.

​A Twitter user shared a video from Hyderabad in the Indian state of Andhra Pradesh showing people standing in attention at a market place paying their respect to the country's National Anthem, which was playing on the public announcement system in the backdrop.

​Another user posted a picture of German Shepherd, Raja, part of Indian Border Security Force's K9 unit, and his handler participating in the celebrations.

People also used the occasion to thank the Coronawarriors who have been on the front lines of the fight with the deadly disease since the first case was reported in February this year. PM Modi expressed his gratitude for doctors, nurses and sanitisation workers in his address to the nation earlier in the day.

Picturesque images of monuments lit up in the tricolour of the nation's flag were also shared; one Tweet featured a video of a parajump featuring the Indian flag, which added adrenaline to the celebrations.

​The festivities commenced with Indian Prime Minister Narendra Modi's address to the nation. In his address, PM Modi said that the country's scientists are working tirelessly for a vaccine against COVID-19, and the government will begin production of the vaccine once it receives the go-ahead.