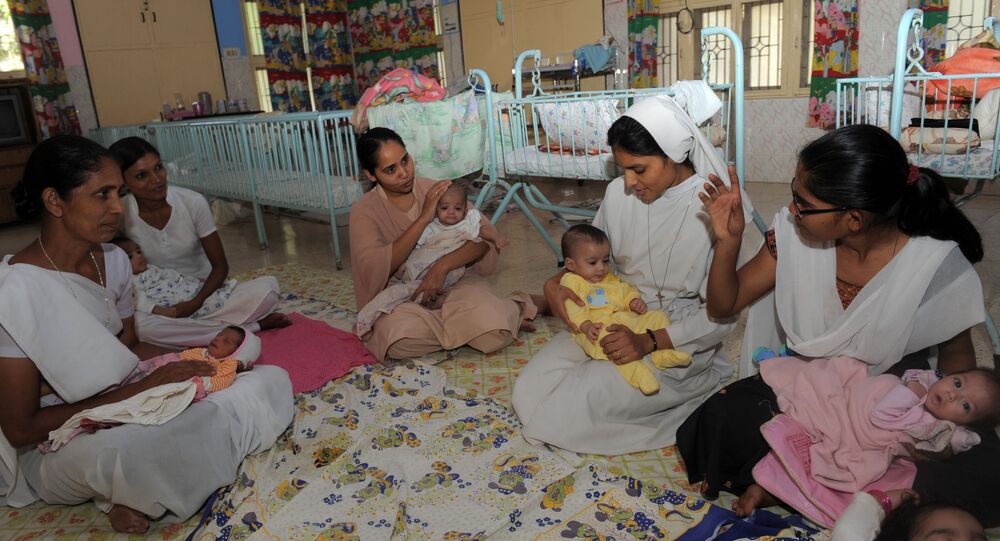 New Delhi (Sputnik): Non-profit organisations in India have swiftly risen to serve people by engaging in COVID-19 relief work and extending help to the vulnerable sections of society. However, NGOs do not only operate in times of crisis. A steep reduction in corporate and public funding is set to hamper their projects for months to come.

With a majority of donations and charity diverted to COVID-19 relief, shelter homes and orphanages in India are living on the edge. While some NGOs say that most of their sponsors have withdrawn support, others point out that they have to put new admissions on hold.

"Due to the cash crunch we are quite literally working hand to mouth. For each new aspect of our projects, we execute immediate fundraisers", said Geetanjali Chopra, founder, Wishes & Blessings NGO, which also runs a shelter house in Delhi for the elderly, told Sputnik. The shelter home houses eight women and four men.

Gitanjali stated that the lack of funding and the sponsorship withdrawal have forced the NGO to look for new sponsors for these programmes to ensure that they continue uninterrupted.

Similary, the Muskurahat Foundation is working with 11 different shelter homes and orphanages across the country. Co-founder Ayush Khandelwal tells Sputnik that "Shelter homes and orphanages that they are working with are striving for even regular supplies and vegetables. Majority of donors in crowdfunding backed out and the donation capacity of many individuals also decreased to a great extent".

The homes that Muskarahat works with combined have more than 300 kids varying from ages 4 to 20 years old.

In India, the Corporate Social Responsibility (CSR) Act mandates that at least two percent of the revenue by large corporations should be spent on means to resolve social issues and NGOs.

Most of the CSR funds, which are the financial backbone of these NGOs, have been directed towards the dedicated COVID-19 relief fund PMCARES, launched by Indian Prime Minister Narendra Modi, or to other local reliefs.

An in-depth study conducted by FSG, a social action non-profit, points out that funding for traditional CSR activities could be cut by 30-60 percent. While contractual commitments might still come through, agreements made verbally are likely to take the maximum hit.

The pandemic has pushed families already living on the edge deeper into poverty, which has sparked fear that more couples will abandon their children or look for help. However, already operating under a funding crunch, the NGOs are either not functioning at their maximum capacity are putting new admissions on hold.

"One of the more serious regrets we are facing as an organisation is that we have put all new admissions on hold", Wishes & Blessings NGO founder Geetanjali said.

India’s national CSR data portal suggests that companies spend around $278 million on the development sector related to the marginal sections of society.

Will Gov't Act as Surrogate?

Non-profit organisations come into the picture when government policies and welfare schemes do not trickle down to the needy and marginalised due to various limitations.

"The independent young foundations, which were to an extent similar to MSMEs, were granted no help or no wave off of any sort from the government", he said.

As per government records, India has nearly 3.4 million NGOs that work in several sectors, ranging from disaster relief to advocacy for marginalised and disadvantaged communities.

India’s Ministry of Women and Child Development implements projects like the Swadhar Greh Scheme for deserted women and female survivors of natural disaster, the Ujjawala Scheme for combating the trafficking of women and children for commercial sexual exploitation, the Working Women’s Hostel Scheme, and the Family Counselling Centre through NGOs.

The government’s latest data says that around 73,387 working women are receiving benefits through the Working Women’s Hostel Scheme, 412,205 women from the Family Counselling Centre, 5,000 from the Ujjawala Scheme, and 12,500 deserted women from the Swadhar Greh Scheme across the country.

India's government has rolled out a $2.6 billion package for daily wage labourers, who have been the worst hit by the pandemic-induced lockdown imposed on 25 March.