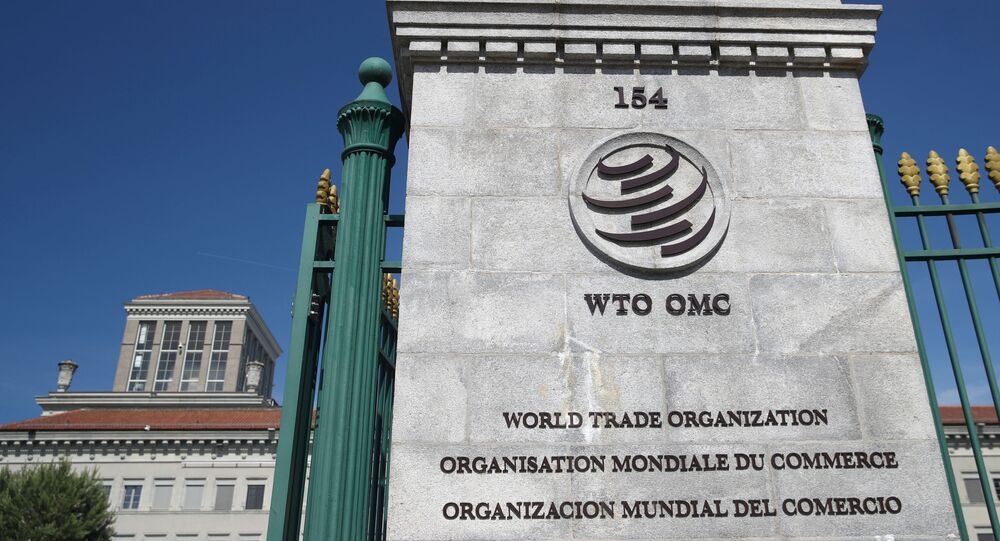 New Delhi (Sputnik): On 29 June, India banned 59 Chinese mobile apps in a move widely perceived as a response to the border dispute in the Galvan valley of Ladakh. On 15 June, twenty Indian soldiers were killed in violent clash between patrol parties belonging to both sides. Since then, India is in arms against China on the economic front.

China claims that India's ban on 59 major Chinese apps, including the notorious TikTok app, the UC Browser and Shareit, among others, is a violation of World Trade Organisation (WTO) norms. Banning Chinese apps is one of a number of steps, including import inspection, barring Chinese companies in national telecom enterprises and railway contracts taken by India in response to border tensions between the countries.

The ban on Chinese apps has ruffled feathers, as far as Beijing is concerned, as the Chinese embassy in New Delhi reacted to the decision within 24 hours, citing WTO. “India’s measure, selectively and discriminatorily aims at certain Chinese apps on ambiguous and far-fetched grounds, runs against fair and transparent procedure requirements, abuses national security exceptions, and suspects of violating the WTO rules,” said Ji Rong, a spokesperson for the embassy of China, in a 30 June statement.

The embassy maintained that the ban on the apps “goes against the general trend of international trade and e-commerce, and is not conducive to consumer interests and the market competition in India”.

Observers feel, however, that Beijing's claims ring hollow, particularly as China has some of the strictest internet censorship in the world. China’s Great Firewall prevents access to foreign social media platforms such as Facebook, Twitter, Instagram, Snapchat and YouTube. Foreign news websites such as the BBC, The New York Times, and the Wall Sreet Journal cannot be accessed in China without using a VPN. Search engine Google also remains restricted.

A lawmaker from the Bharatiya Janata Party and a former Indian Administrative Services officer, Bijayant J Panda, highlights this on Twitter. Panda tweeted, “Can’t stop laughing. China claiming India ban on TikTok violates WTO guidelines, when it itself bans many apps (including Twitter), all from WTO signatory countries.

Is India’s ban on 59 Chinese apps a violation of WTO norms? Experts do not think so.

Rahul K Mishra, Professor of Strategy and International Management at IILM Institute for Higher Education told Sputnik: “China’s claim that India is violating WTO norms by banning Chinese apps is completely untenable. WTO is mainly about the industrial products, tariffs and market access. Nothing has come very concretely in terms of accessing market of and other things.”

"China has also banned Facebook and Twitter. So, China’s own record is not so great in providing access to other nations’ social media platforms and products. India is not violating any WTO principles. If India discriminates [against] Chinese industrial products, then there may be violation of WTO unless and until India can prove dumping. Social media apps are not agricultural or industrial products, so China’s claim is not tenable at all.”

Experts also question the role of the WTO in not being able to break China's monopolistic tendencies in global trade. "No country can monopolize trade. China has used all opportunity to monopolise trade, which essentially has been a failure of WTO. Can the WTO ensure that there is no espionage of our data?" asks Charan Singh, chief executive of Economic Growth and Welfare Foundation (EGROW).

A top former official from the Indian ministry of commerce, speaking on condition of anonymity, opined: “Only an agreement on bilateral trade between two countries can be violated by anyone, thereby giving a right to the other to approach the WTO redressal forums. No such agreement has been violated in this case by India.”

The official said that as in the case of restrictions on foreign social media platforms, China follows a generally “restrictive policy” on market access, to protect its own industries.

“It was only due to lack of market access and non-compromising attitude on dumping, and non-tariff barriers that India withdrew from the China-led Regional Comprehensive Economic Partnership in November last year. There is acute lack of balance in bilateral trade between India and China", the official said.

China envisaged RCEP as a large trade bloc comprising ten nations in the Association of South East Asian Nations (Asean) plus Australia, China, New Zealand Japan and Korea. No agreement has been signed. Once formed, the bloc would control at least 30 percent of global trade.

Trade figures between India and China point out the massive gap. Of the total $87.06 billion bilateral trade between India and China in the financial year 2018-19, Indian imports from China stood at $70.31 billion while the exports were at about less than a fourth of that value, at $16.35 billion, with a gaping trade deficit of $53.56 billion. In the preceding year (2017-18), the trade imbalance was some $63.05 billion.