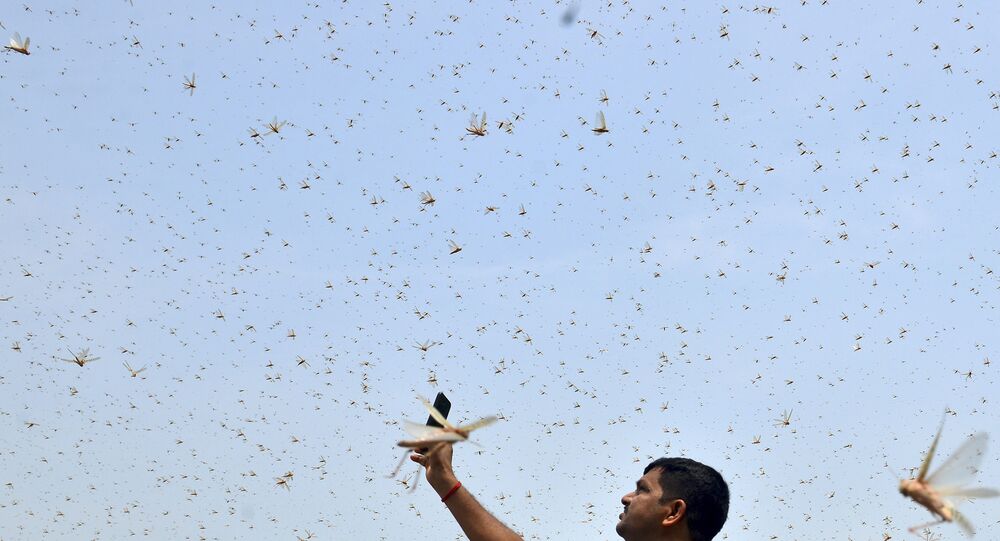 New Delhi (Sputnik): After a gap of over two decades, large and aggressive swarms of locusts have invaded several northern and western states in India, damaging standing crops and greeneries. The last locust incursion in the country was reported in 1997 and there hadn't been any major swarms between then and 2020.

Locusts have attacked large parts of Rajasthan, Gujarat, Madhya Pradesh and Uttar Pradesh  in the first major incursion in over 20 years. India has deployed an airborne locust control system, fitted onto a Mi17 helicopter, to control their onslaught. Aircraft engineers from Indian Air Force have carried out the modifications, using home-grown design and components.

The helicopter has an auxiliary tank of with a 800 litre capacity which has been fitted inside to store the pesticide Malathion in an appropriate concentration. It can spray for nearly 40 minutes in an infected zone, covering an area of approximately 750 hectares in each mission.

A team of test pilots and engineers have successfully carried out ground and airborne trials of the modified helicopter and cleared it for deployment.

​The atomized airborne spraying is achieved in air through a configuration of nozzles mounted on both sides of the external trusses of the helicopter.

According to India’s federal Agriculture Ministry, the swarms flew across the border around 30 April and are still active in several regions.