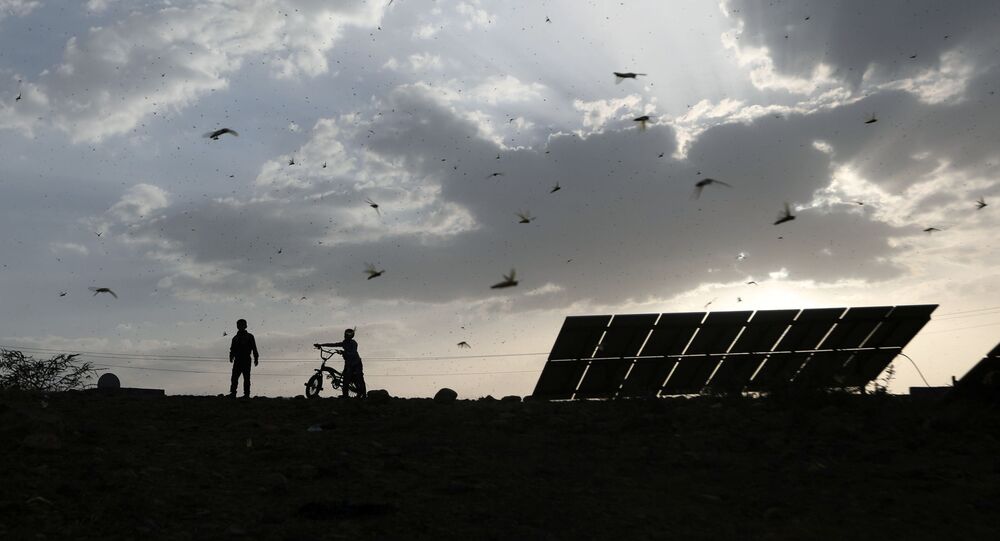 New Delhi (Sputnik): Just when India began to witness relief in terms of the locust menace, a fresh wave of gigantic swarms of locusts entered an agricultural field in the desert state of Rajasthan. The new swarms have resulted in further agricultural losses for farmers.

The agriculture department of India's Rajasthan on Friday said the northern side of the state is under a fresh attack from swarms of locusts. They said districts such as Jodhpur and Jaisalmer, which share a border with Pakistan, are the worst affected.

Netizens have been sharing videos rapidly on Twitter, revealing that the so far two-day insect attack, has not been dealt with sincerely by the authorities.

Locals from the area are requesting that higher government authorities take quick measures to get rid of the crop-eating swarms.

Videos of the agricultural department spraying chemical solutions in Jaipur's affected areas, however, did find their way to social media.

A gigantic swarm of locusts has been flying over the field of Panchala sidha,khinwsar(Nagaur) for two days.There has not been taken any measure to control yet. Farmers incurred a great loss.They r pleading.Request to @AgriGoI @LocustIndia @NarayanBeniwal7 to send controlling team pic.twitter.com/217n2QjRr4

​With the onset of the monsoon in Rajasthan, which shares a border with Pakistan, authorities at the Jodhpur-based Locust Warning Organisation (LWO) are preparing to control the population of locusts in the desert areas between India and neighbouring Pakistan.

On 24 June, B.R. Kadwa, the deputy director of Rajasthan's Agriculture Department, revealed that the government of India has planned to use Navy helicopters to control the second wave of locust attacks, which is expected to last for a month at least.

In recent months, swarms of locusts have reached as far as northern India, affecting crops in Maharashtra, Madhya Pradesh, and Uttar Pradesh.