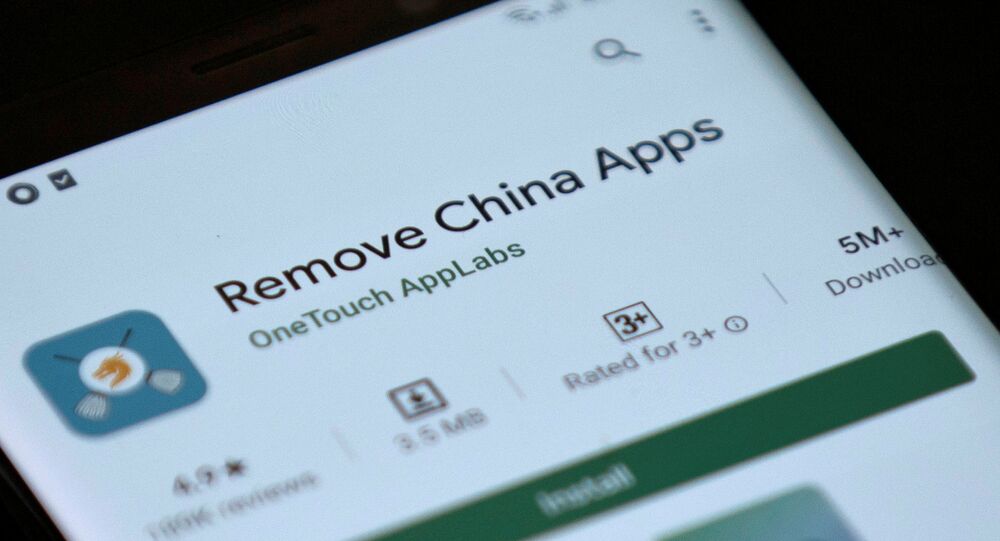 New Delhi (Sputnik): Amid the ongoing border stand-off between India and China near the eastern Ladakh region, a large section of people have started a campaign to boycott China-made goods. Retail traders have been asking for a ban on products from China, while new software against Chinese apps has also been gaining popularity since May this year.

Reacting to an app gaining popularity in India called “Remove China Apps”, China’s state-run Global Times media outlet on Tuesday reported that India could be staring at “punishment” for misusing the currently prevailing “anti-China sentiment” in the country.

The “Remove China Apps” application is the brainchild of an Indian start-up called OneTouch AppLabs and was released on 17 May. Between then and now, the app has been downloaded over five million times on Google’s PlayStore.

Another Chinese publication, The Passage, also claimed that OneTouch AppsLab made the app – which once downloaded, scans for all China-made apps, lists them, and deletes them – in association with an Indian engineer who lost his job in China amid the pandemic.

Popular apps from China like the e-commerce websites Alibaba and Clubfactory are being deleted in India, along with other game and file transfer applications.

India is a huge market for China-made gadgets from companies like Oppo, Vivo, Xiaomi and OnePlus, along with Chinese games and apps like PUBG and TikTok. But recently, TikTok – which has its largest user base in India – was reported to have been tracking the location of users via SIM cards, which is not permitted in India. It was also reported that the Chinese smartphone player Xiaomi was tracking the search data of users in incognito mode.

Paying no heed to reports of these alleged spying attempts being unravelled in India, Chinese industry analysts believe that the “Made in India” campaign cannot survive without the “power of Chinese manufacturing”, several Beijing-based media outlets reported.

© AP Photo /
'We'll Not Back Off': Chinese Troops Crossed Into Indian Side, Admits India's Defence Minister
Along with apps and smartphones, India imports around $54 billion worth of goods, which includes mechanical, electrical, and chemical products, base metals, plastics, rubber, textiles, furniture, and toys, from its Asian neighbour, which is trying to push the boundaries in the Ladakh region, where the two countries are loosely demarcated by the Line of Actual Control.

In the first public admission, Indian Defence Minister Rajnath Singh said that Chinese troops crossed into the Indian side of the Line of Actual Control. However, he added that India has taken the necessary steps – without revealing further details.

The minister said that solutions are being found through military and diplomatic talks and that senior officers from both countries are likely to meet on 6 June.