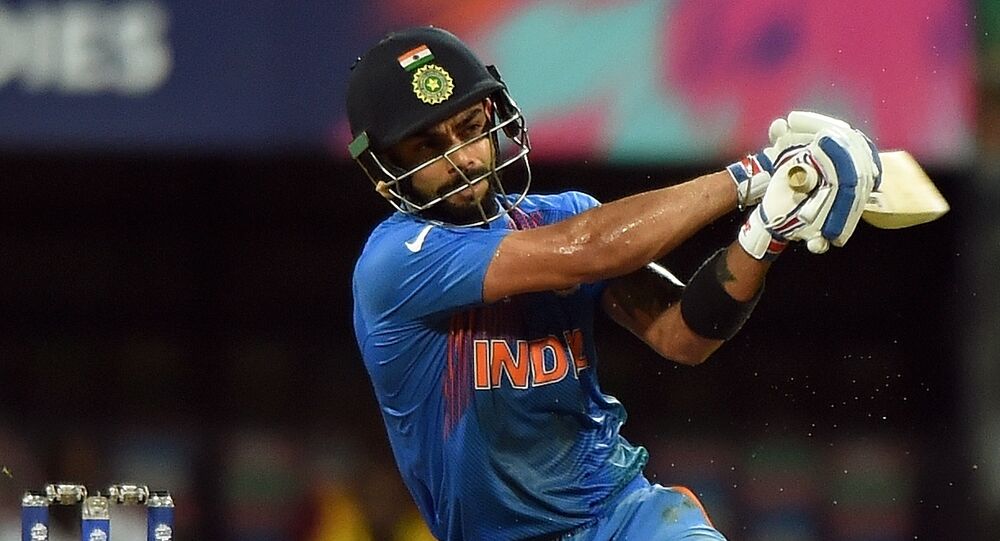 New Delhi (Sputnik): The game of cricket is not just limited to sports in India – for many it’s like a religion and presently, Captain Virat Kohti enjoys a huge fan following in the country. Until now, the Indian skipper has been making the rounds on social media amid the coronavirus-lockdown for his entertaining videos, but today that changed.

The Indian cricket captain on Saturday became the only Indian athlete to rank among the top 100 highest paid sportspersons released by Forbes Magazine. Making a jump of more than 30 spots from last year, Kohli secured 66th place on the Forbes list. Last year, he ranked 100th.

As per the magazine estimates, Kolhi bagged a total of $26 million last year – out of which $24 million was obtained from his brand endorsements for companies like Audi and Puma, and $2 million was gained from his salary and for wins.

Netizens, who recently made memes on the cricketer acting like a dinosaur in an Instagram video, took to social media to congratulate and shower love on their cricket captain.

From being on 100th place in 2019 to making it 66th this time in 2020.This man is just above everything else.#Forbes #ViratKohli pic.twitter.com/rNLR9V9dwX

@Cristiano top ranker in football and 2nd place all over the world@imVkohli is the only Cricketer listed in Forbes top 100 list (66th rank)
My both kings ruling their respective fields 😎#ViratKohli #CR7 #Ronaldo #Forbes pic.twitter.com/4VidKaDzJZ

According to Forbes Virat Kohli's annual income (2020) is more than Garath Bale !

This is unbelievable! #ViratKohli #forbes

The Indian cricketer became the fastest batsman to score 11,000 runs in One Day International (ODI) matches earlier in January. He is regarded as one of the best batsmen in the world, in the same league as the "god of cricket" Sachin Tendulkar.

This year, Swiss tennis champion Roger Federer topped this year’s Forbes list; he is estimated to have earned of $106.3 million in the past one year.

Other international sports personalities to make it onto the list were football stars Christiano Ronaldo and Lionel Messi, among many others.