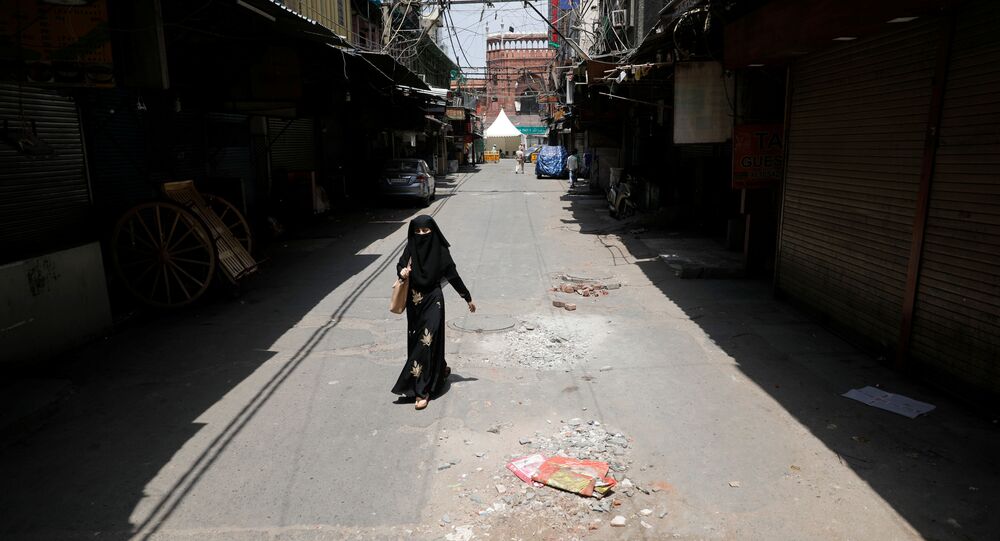 New Delhi (Sputnik): India’s unprecedented containment strategy has come with economic costs that have mainly hit migrant workers and industries, resulting in panic following the extension of the country’s nationwide lockdown. The International Monetary Fund (IMF) on Tuesday said that India’s economic growth will fall down to 1.9 percent this year.

The Indian government has announced the opening of economic activities starting 20 April after an unprecedented 27-day complete lockdown announced by Prime Minister Narendra Modi on 24 March.

The 15-page document released by the Home Ministry stated that the decision to open selective activities such as agriculture, construction, IT, e-commerce, and inter-state transport has been taken to "mitigate hardships of public".

“States will decide the additional public activities that will be allowed from 20 April. However, these additional activities will be operationalised based on strict compliance with the existing guidelines on lockdown measures", the order reads.

The order clearly mentioned that manufacturing and other industrial establishments with access control will be allowed in Special Economic Zones, industrial estates, and industrial townships.

#IndiaFightsCOVID19
MHA issues revised consolidated guidelines on the #Lockdown2 measures to be taken by Ministries/Departments of Govt of India, State/UT governments & State/UT authorities for the containment of #COVID19 in India. (1/2) pic.twitter.com/Q85DFtMAob

The order also stated that millions of workers employed in agriculture and construction can resume their work from 20 April. Nevertheless, travel by air, rail, metro, public buses, taxis, and cab aggregators will remain suspended until 3 May. Movie theatres and shopping malls are to remain shut during this period.

Medical insurance has been made mandatory for workers in factories and office establishments. National directives on COVID-19 suggest using staircases, staggering work hours to ensure social distancing, and a ban on entry of non-essential visitors in the workplace.

The ministry has made it mandatory to wear face covers and masks in public places and workplaces. Additionally, spitting anywhere in a public place is now a punishable offence. There will be a strict ban on the sale of liquor, tobacco, etc. until 3 May.

The Indian Health Ministry has reported 11,439 COVID-19 positive cases to date 1,076 of which were reported over the last 24 hours. So far, 377 people in the country have lost their lives due to the COVID-19 pandemic.