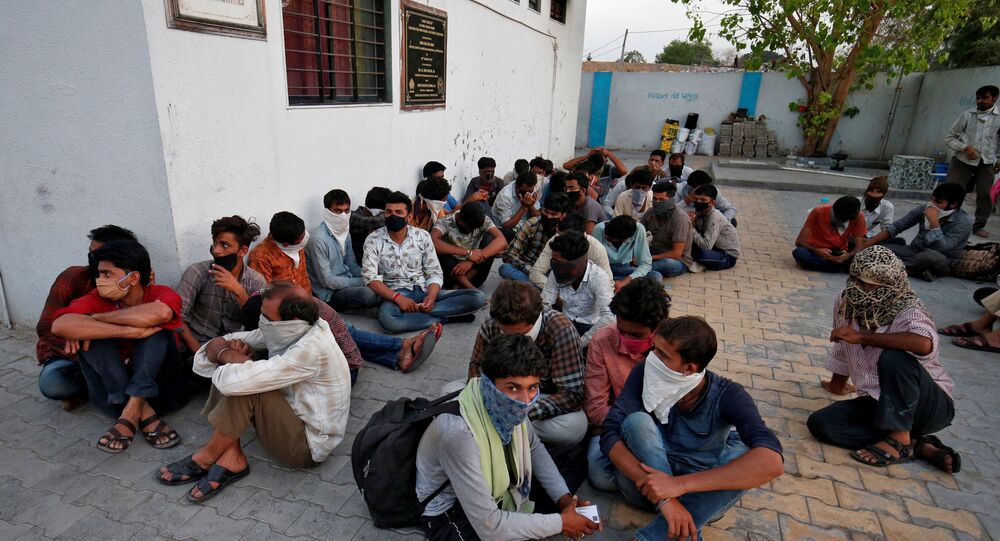 New Delhi (Sputnik): As per the International Labour Organisation, about 400 million people working in the informal sector in India are at risk of falling deeper into poverty due to the coronavirus crisis. Daily wage workers have been left to fend for themselves without any work due to the nationwide lockdown.

India has set up 20 control rooms across the country to address wage-related grievances and to mitigate problems faced by migrant workers amid the lockdown period to contain the coronavirus crisis, said the Labour Ministry on Tuesday. The control rooms have been set up under the Office of the Chief Labour Commissioner.

Workers can reach out to the control rooms via calls, emails and WhatsApp and based on their complaint the authorities will take action as per labour laws. The concerned officials have been told to adopt a humane approach to assist the aggrieved workers and ensure the delivery of timely relief.

Workers in different parts of the country have begun coming down on the roads as a mark of protest. With no work, they have been left with no wages or food to survive. Workers in Surat in Modi’s home state Gujarat even resorted to violence as they have nowhere to go.

#Bad news coming in from #Surat. #Migrant workers in the city came out on the streets in huge numbers asking for their #salaries and #demanding permission to get back home. Torching of vegetable carts, stone pelting and #lathicharging followed. Around 70 #detained. pic.twitter.com/gflyc8ZKsr

Soon after Prime Minister Narendra Modi announced a 21-day lockdown on 24 March, migrant workers started heading for their homes in villages as they were uncertain about their future in the city with no work and no money.

On Tuesday, while addressing the nation on the COVID-19 pandemic, Modi said: “Be compassionate towards the people who work with you in your business or industry. Do not deprive them of their livelihood".

The government had also asked employers to pay daily wage labourers and assured them of food supply, but not all of it has reached those working in the informal sector.

The government has already announced a relief package for people affected by lockdown of around $23 billion and out of this package around $6 billion for free rations and $5 billion for cash transfers for women and senior citizens.

The country’s largest workers union CITU (Centre of Indian Trade Unions) claims that employers have been flouting the government's directives.

“The contract workers, casual workers, and in many cases regular workers have been thrown out of employment in the thousands in several establishments and several thousand others have not been paid wages for the month of March 2020 in tea gardens, jute mills, IT &ITES sector, various construction projects", Tapan Sen, General Secretary of CITU told Sputnik.

Sen added that millions of migrant workers working in industries and the service sector have lost their jobs and been evicted from their residences and thrown under the sky to suffer in hunger with their family members, contrary to the Home Ministry’s directives to the.

The majority of the country's workforce is in the unorganised sector and they have barely been covered under any social security schemes.