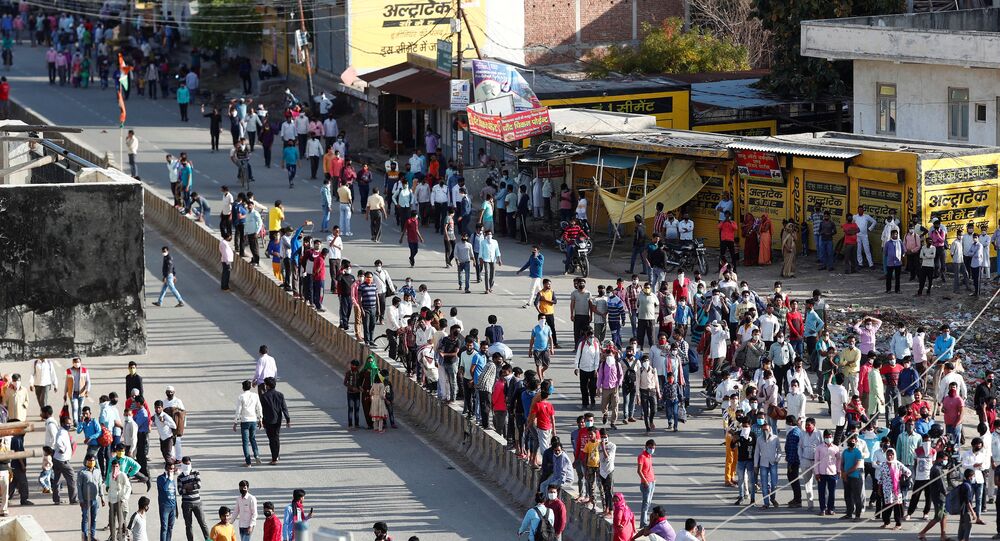 New Delhi (Sputnik): Indian Prime Minister Narendra Modi declared a three-week lockdown in the country earlier this week in a bid to contain the spread of the coronavirus pandemic. The federal government has also rolled out a $22.36 billion economic relief package for the poorer sections of the population.

On Saturday, India's federal government issued advisories to states instructing them to take immediate steps to provide food and shelter to migrant workers – who began walking for hundreds of kilometres from cities like Delhi and Mumbai to their hometowns in states such as Uttar Pradesh, Madhya Pradesh, and Gujarat.

The federal Ministry of Home Affairs asked state governments to ensure medical care as well as clothing for workers stranded away from home amid the lockdown under the State Disaster Response Fund (SDRF).

​Hundreds of migrant workers from big cities lost their daily earnings following the lockdown and didn't have enough money to pay off their rents, so they took to the road on foot, which netizens have called the “longest march in India”.

​After several heart-wrenching media reports, the Uttar Pradesh government began deploying buses to help these migrant workers get back to their hometowns from cities including Noida, Ghaziabad, and Delhi – which are part of the National Capital Region (NCR) in India.

BIG BREAKING: UP Govt deploys over 200 buses to transport back the stuck migrant workers in Delhi, Noida and Ghaziabad.

The buses will ply every two hours from the borders in Ghaziabad and Noida.

The government wakes up after relentless reporting by journalists. pic.twitter.com/cFxrbs2003

​​The Uttar Pradesh government, which received flak on social media, also waived rents for daily wage earners who have had to vacate their homes. District Magistrate of Noida (UP) B.N. Singh announced that all landlords who have rented out their properties to such workers should only collect rents after the lockdown is over.

Order by which Landlords in Gautambuddhanagar can take rent from workers ( tenants) only after a month. No exodus of workers on rent ground will be allowed in present circumstances. Please ensure and cooperate. pic.twitter.com/ucn5I0oe68

​Transportation services, including private carriers like SpiceJet and GoAir along with the Indian Railways, have extended proposals to drop workers off closer to their hometowns and provide food.

First SpiceJet, then IndiGo, now GoAir steps up to transport migrant workers across India. Air India, the maharaja bringing back Indians from across the globe back home. Millions of losses every single day but it’s inspiring to see them step up in time of need. Jai Hind! 🇮🇳🙏🏼🇮🇳🙏🏼 https://t.co/gJmuZShLXI

​The Indian Railway Catering and Tourism Corporation (IRCTC) have opened up their kitchens to provide bulk cooked food with paper plates at locations where they have base kitchens.

According to the Indian Ministry of Health and Family Welfare, the country has recorded 873 active cases of coronavirus, including 47 foreign nationals and 19 deaths due to the infection.