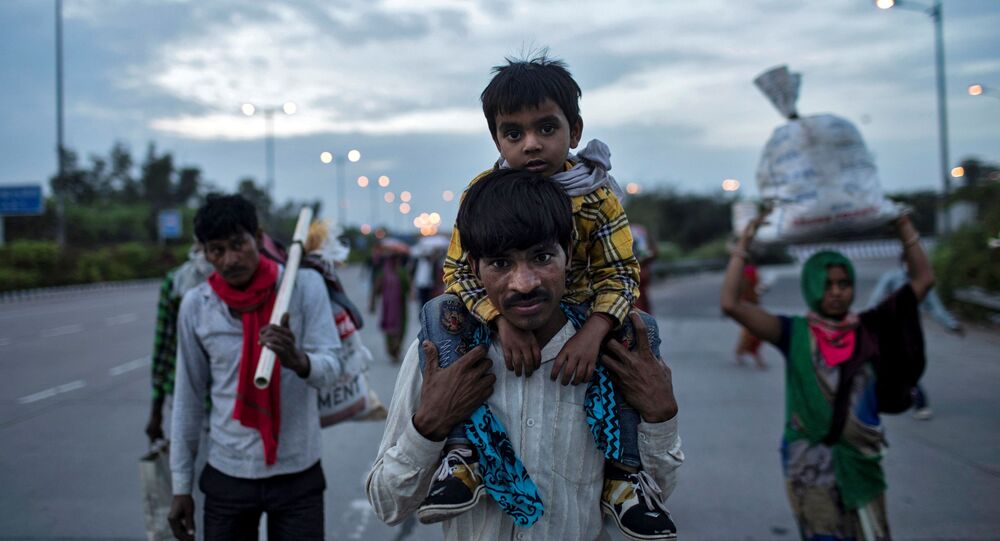 New Delhi (Sputnik): Soon after the Indian Prime Minister ordered a 21-day lockdown in the nation, tens of thousands of migrant labourers embarked upon long journeys to reach their homes. While middle and upper-class families lock themselves inside secure walled compounds, things have turned rough for those less fortunate and their families.

A couple from Uttar Pradesh with two children – one an infant of a few months, and another about 4 years old – are among a caravan of people headed toward their home state on the Grand Trunk Road, the national highway connecting Amritsar via Delhi and Uttar Pradesh with Kolkata.

“We don’t have anything to eat. We only ate what was offered to us by some people passing in cars,” said the woman, headed with her family for Mainpuri in Uttar Pradesh, 360 km southeast of Delhi.

“The contractor is not giving us the money for the work we have done. How will we eat here? We will reach our home in 4-5 days and we don’t have other options,” said her husband, who, with his family had arrived at Delhi’s Wazirabad area on Friday evening.

A Sputnik correspondent following the labourers has witnessed the edges of highways crowded with thousands of people, including women and children, walking only to reach home.

Scenes on the highway connecting Delhi to Uttar Pradesh look surreal in the lockdown as the thousands of migrant labourers walk with eyes set on the long road ahead.

"There isn't even a drop of water to drink. We will reach our villages (400-500km away) in 4-5 days," says a migrant labourer, whose life has changed with the #CoronaLockdown. What is govt doing for them except making hollow promises? @PMOIndia @ArvindKejriwal @AmitShah pic.twitter.com/x77WA5itAM

Indian announced a major stimulus package of around $22.36 billion for the poor and for daily wage workers, who have lost their jobs in the 21-day lockdown.

For Raju, a migrant labourer staying in a rented accommodation in south Delhi’s Sant Nagar, the schemes are "all talk and of no help".

“We have got no help from anywhere and god knows when [government aid] will reach us," said Raju.

Currently enduring a three-day, nine-hour journey on foot to his home town in Uttar Pradesh’s Jhansi, over 400 km distant, walking is the last resort for Raju.

“We are out of money from past one week. I don’t have money to eat or pay rent. With everything shut, we have decided to walk back to our hometown. At least we will survive there,” Raju told Sputnik.

Between the Devil and the Deep Blue Sea

“Now that we have exhausted the ration, how can my family survive on a meagre INR 2000 ($26.64)? We don’t even know what will happen after 21 days. On one hand, we are scared of coronavirus and on another, there is the fear of starvation, we are crumbled from both sides,” said Rani Devi, walking to Jhansi with her family.

The home ministry asked states to take immediate steps to provide water, food and shelter to the most vulnerable and make them aware of measures being taken by the government.

Government measures and assurance are not enough for people surviving on hand-to-mouth living, according to reports, particularly for those who do not have the required papers to avail the purported aid. The poor and struggling are especially fearful that government aid, if it does come, will not be enough to cover even the most basic needs, now that they can no longer seek employment.

With children on their shoulders and handheld belongings, people have set out on foot for journeys of hundreds of kilometers on deserted roads, with shut shops and closed restaurants.

“There is no one to help us here in the worst-case scenario. At least we have neighbours and relatives who would help us in the village if we fall sick or die of starvation,” said Rani Devi.

Will reached our hometown in 4-5 days in Agra. Our kids have only eaten what was offered by passing by car drivers, says the family walking with two small kids.
People migrating are uncertainof the relief from the govt.#COVID2019 #massexodus @narendramodi #LockdownWithoutPlan pic.twitter.com/NzDMir9T4L

Delhi Chief Arvind Kejriwal announced compensation of INR 5000 ($66.59) each, to all construction workers in the national capital, to assist in their survival during the 21-day lockdown.

“At present, there are around four hundred thousand workers registered with the Delhi’s (Building and Construction Worker board), but that too is not an updated register. The amounts will be transferred directly to those whose accounts are linked with us. Most of the workers keep moving from city to city on the lookout for jobs. So, the amounts will be disbursed only after due verification,” Hindustan Times quoted a senior official who requested that they not be named for fear of professional reprisal.

With No Food in Kitchen, Poor Indian Women Scramble to Withdraw Meagre Savings