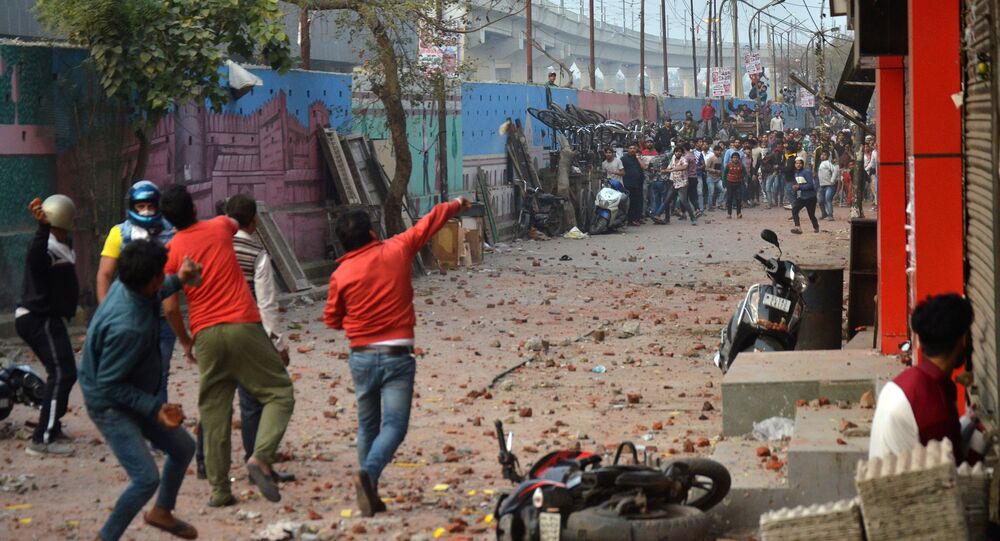 New Delhi (Sputnik): On Monday, the Indian capital witnessed one of the worst communal clashes in recent times, resulting in the deaths of six civilians and a police officer and more than 100 reportedly injured. Police have issued prohibitory orders in northeastern Delhi and have deployed paramilitary troops to quell the violence.

A day after violent clashes between two communities over a controversial citizenship law in the Indian capital left seven persons dead and dozens injured, a leading human rights organisation has gone before the High Court of Delhi seeking an independent judicial inquiry into the incidents of violence.

The Human Rights Law Network has also sought a court directive to arrest some prominent political functionaries, alleging that their hate speech incited the public to violence and seeks compensation for the deceased.

Meanwhile, Bharatiya Janata Party (BJP) parliamentarian Gautam Gambhir has come out against a politician, who allegedly incited violence and requested strict action against him.

BJP’s Kapil Mishra is alleged to have made a provocative speech, triggering clashes between the two communities.

#WATCH what Kapil Mishra said to the DCP on camera.

"Till Trump leaves, we will go peaceful.
If by then, you don't clear the roads then we would not even listen to you" pic.twitter.com/ej6vcQZN0w

​Several localities in Delhi's northeast witnessed violence, including stone-throwing, and setting shops, buildings and vehicles on fire on Monday 24 February.

Delhi: Latest visuals from Khajuri Khas and Bhajanpura, where violence and arson were reported yesterday. Police deployed in the area and section 144 has been imposed. #NortheastDelhi pic.twitter.com/QhZ3wuKtZ6

Protests across India began after the federal government enacted the CAA on 12 December. Considering this latest death toll in Delhi, 32 people have lost their lives during protests across the country since December.

The law grants citizenship rights to illegal immigrants "provided that the persons belonging to Hindu, Sikh, Buddhist, Jain, Parsi or Christian communities from Afghanistan, Bangladesh or Pakistan, entered India on or before the 31st day of December 2014". However, it conspicuously excludes Muslims from its purview.

Several opposition parties, civil rights organisations, and university students have opposed it, claiming it is discriminatory on religious grounds and violates the secular credentials of the Indian Constitution. However, the federal government and ruling BJP functionaries have tried to dispel any such criticism.